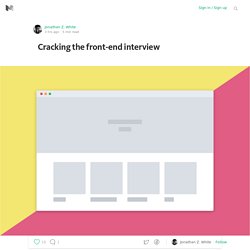 That’s a fact. Not only do you need to have a solid grasp of computer science fundamentals, but also an understanding of things like web performance, build systems, and CSS layout engines. While there are resources out there, I’ve found that there are only a few complete guides for helping you prepare for a front-end interview. So I decided to write a topic by topic outline that will hopefully help you ace your next interview. Before the interview So before your interview, ask your recruiter for the format of the interview. Also, ask your recruiter for tips on what topics to focus on when preparing. Front-end concepts HTML and CSS, Javascript, and Javascript design patterns are the key concepts that you will be tested on during an interview. HTML and CSS is like the bread and butter of front-end development.

Balloon.css — CSS tooltips for HTML elements. Simple tooltips made of pure CSS Balloon.css lets you add tooltips to elements without JavaScript and in just a few lines of CSS. 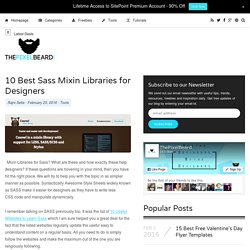 What are these and how exactly these help designers? If these questions are hovering in your mind, then you have hit the right place. We will try to help you with the topic in as simpler manner as possible. Syntactically Awesome Style Sheets widely known as SASS make it easier for designers as they have to write less CSS code and manipulate dynamically. I remember talking on SASS previously too. If you have used SASS in your development workflow then you might be well acquainted with mixins, but if you are new to it, then I must tell you that mixin library in SASS helps prevent repetition while writing CSS. Mixin comprises of CSS declarations that you can reuse throughout your website. 1. CSS Buttons are a library that helps you build buttons beautifully. 2. Type Settings is a Sass and Stylus toolkit for setting type. 3. 4. 5.

This is a collection of Sass mixins and helpers that make adding CSS3 animations and transitions easy. 6.

React. Rich Text Editor Framework for React. Sane GitHub Labels. If you work for a company that manages any part of their codebase using GitHub, or if you work in some open-source repositories with at least a few contributors, then I’m sure you’re aware of how wonderful labels can be at organizing everyone’s work. 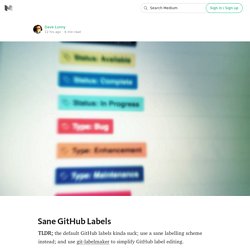 Maybe you never touch them, maybe your team already has an extensive label system in place, but regardless of how your team uses them, I think we can all agree that those seven default labels GitHub provides us with are kinda weak: So obviously they had some good ideas here, such as flagging issues with question if there is a question related to how the code works. But the main issue with these labels is that they offer us no context about the status of an issue, only what type of issue it is, such as an enhancement or a bug. This may be totally fine if you’re the only contributor, or are only working with a small team of developers. Let’s step into a repo and delete all of the existing default GitHub labels. Getting started with gulp — Mark Goodyear — Front-end developer and designer. Updated Jan 28th, 2014 to reflect the advancement of gulpUpdated Apr 21st, 2014 to utilise updated `gulp-livereload`Updated Aug 11th, 2014 Using `del` instead of `gulp-clean`, updated `gulp-livereload`Updated May 20th, 2015 Update `gulp-ruby-sass` syntaxUpdated Nov 2nd, 2015 Update `del` syntaxUpdated Jan 12th, 2016 `gulp-minify-css` depreciated. 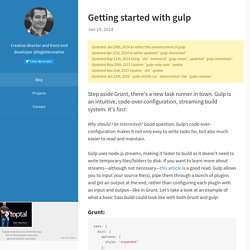 Use `gulp-cssnano` Step aside Grunt, there's a new task runner in town. Gulp is an intuitive, code-over-configuration, streaming build system. It's fast. Why should I be interested? Gulp uses node.js streams, making it faster to build as it doesn’t need to write temporary files/folders to disk. Flexbox playgroung. 22 Essential CSS Recipes. Hey there! 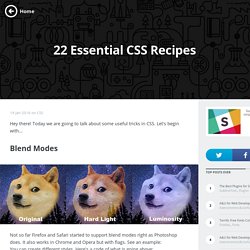 Today we are going to talk about some useful tricks in CSS. Let's begin with... Blend Modes Not so far Firefox and Safari started to support blend modes right as Photoshop does. It also works in Chrome and Opera but with flags. Jsonstub. Quantified Anything: Turning Google Sheets into a Backend Database. The Google Docs suite is great, it offers real-time collaboration and near-feature parity with Microsoft Office (except maybe PowerPoint). 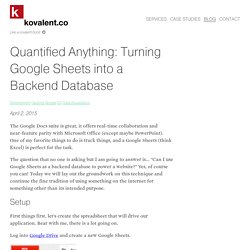 One of my favorite things to do is track things, and a Google Sheets (think Excel) is perfect for the task. The question that no one is asking but I am going to answer is... "Can I use Google Sheets as a backend database to power a website? " Yes, of course you can! Today we will lay out the groundwork on this technique and continue the fine tradition of using something on the internet for something other than its intended purpose.

Setup First things first, let's create the spreadsheet that will drive our application. Log into Google Drive and create a new Google Sheets.