Ludii Portal. A Bit Awake - News. Making a game where your enemies need to chase the player? 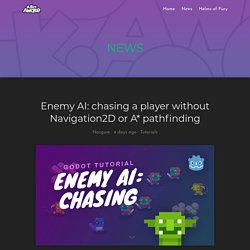 This starts out easy, make the enemy run towards the player! But what happens when they are behind a tree? Or around the corner of a wall? Well, now your enemy looks quite silly as it is stuck against the object, running in place. Not good! To solve this, you could use the Navigation2D or AStar nodes built into Godot (here's a tutorial by GDQuest covering both of them). Getting Started We are going to assume you are making your enemies as KinematicBody2D objects, and that you are using a State Machine to manage their states. To begin with, here is a simple Chase state for a dumb enemy that just runs towards its target, and probably gets stuck on something along the way: func _init(enemy, params): enemy.dir = (enemy.target.position - enemy.position).normalized() func _physics_process(delta): var motion = enemy.dir * enemy.speed enemy.move_and_slide(motion) Scent Trails Then we have to make our actual Scent.tscn that gets dropped. Game AI Pro.

Monte Carlo instead of Alpha-Beta for chess programs? Minimax search and alpha-beta pruning. A game can be thought of as a tree of possible future game states. 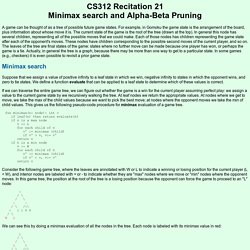 For example, in Gomoku the game state is the arrangement of the board, plus information about whose move it is. The current state of the game is the root of the tree (drawn at the top). In general this node has several children, representing all of the possible moves that we could make. Each of those nodes has children representing the game state after each of the opponent's moves. These nodes have children corresponding to the possible second moves of the current player, and so on. Minimax search Suppose that we assign a value of positive infinity to a leaf state in which we win, negative infinity to states in which the opponent wins, and zero to tie states. A 'Brief' History of Game AI Up To AlphaGo, Part 1 – Andrey Kurenkov's Web World.

This is the first part of ‘A Brief History of Game AI Up to AlphaGo’. 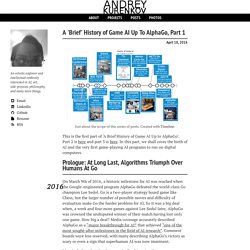 Part 2 is here and part 3 is here. In this part, we shall cover the birth of AI and the very first game-playing AI programs to run on digital computers. On March 9th of 2016, a historic milestone for AI was reached when the Google-engineered program AlphaGo defeated the world-class Go champion Lee Sedol. Go is a two-player strategy board game like Chess, but the larger number of possible moves and difficulty of evaluation make Go the harder problem for AI. So it was a big deal when, a week and four more games against Lee Sedol later, AlphaGo was crowned the undisputed winner of their match having lost only one game. Months before that day, I was excitedly skimming the paper on AlphaGo after Google first announced its development . As with my previous 'brief' history, I should emphasize I am not expert on the topic and just wrote it out of personal interest. . It’s easy to make a computer do this. . . Acknowledgements. Introduction to A* In games we often want to find paths from one location to another. 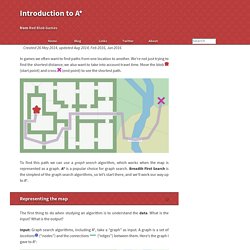 Sprites by StarRavensee footer for link A* doesn’t see anything else. A step-by-step guide to building a simple chess AI – freeCodeCamp. Using these libraries will help us focus only on the most interesting task: creating the algorithm that finds the best move. 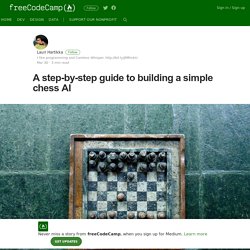 We’ll start by creating a function that just returns a random move from all of the possible moves: Although this algorithm isn’t a very solid chess player, it’s a good starting point, as we can actually play against it: Step 2 : Position evaluation Now let’s try to understand which side is stronger in a certain position.