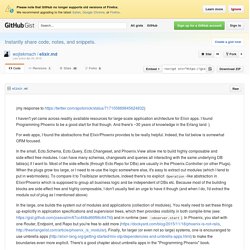 I found Programming Phoenix to be a good start for that though. And there's ~30 years of knowledge in the Erlang land :) For web apps, I found the abstractions that Elixir/Phoenix provides to be really helpful. Indeed, the list below is somewhat ORM focused. In the small, Ecto.Schema, Ecto.Query, Ecto.Changeset, and Phoenix.View allow me to build highly composable and side-effect free modules. In the large, one builds the system out of modules and applications (collection of modules). Elixir RAM and the Template of Doom. Elixir — Where is your state? 06/04/16 by Markus Krogemann No Comments In this post, we will look at Elixir’s Agent abstraction, which provides a way to manage state in an Actor-based, functional programming environment. 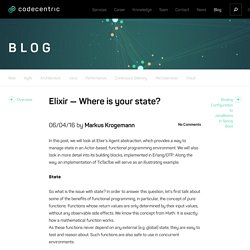 We will also look in more detail into its building blocks, implemented in Erlang/OTP. Along the way, an implementation of TicTacToe will serve as an illustrating example. State So what is the issue with state? Real-world IT systems however are regularly faced with the task to maintain state, be it in some external storage system, or in memory/at runtime. TicTacToe Kata For this post, I have implemented a solution to the TicTacToe kata. Solution Design The implementation is available on github and consists of four Elixir modules, dealing with different aspects such as UI, game logic and state handling.

Model The game state is modeled as a map, using three lists to represent the three rows of the game’s grid plus some additional fields such as the player who is to make the next move. Agent Testing Conclusion. Which Elixir books should I read? Tl;dr: Programming Elixir then Elixir in Action. 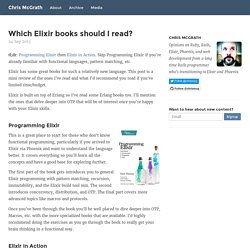 Skip Programming Elixir if you're already familiar with functional languages, pattern matching, etc. Elixir has some great books for such a relatively new language. This post is a mini review of the ones I've read and what I'd recommend you read if you've limited time/budget. Elixir is built on top of Erlang so I've read some Erlang books too. I'll mention the ones that delve deeper into OTP that will be of interest once you're happy with your Elixir skills. Programming Elixir This is a great place to start for those who don't know functional programming, particularly if you arrived to Elixir via Phoenix and want to understand the language better. The first part of the book gets introduces you to general Elixir programming with pattern matching, recursion, immutability, and the Elixir build tool mix. Elixir School · Elixir School. DRY’ing Elixir Tests with Macros – Eidge's Blog – Full-time geek with a crush on full-stack dev and biz. Paragliding pilot.

I’ve been experimenting with Elixir/Phoenix for a while now and I must say it has been an excellent journey. 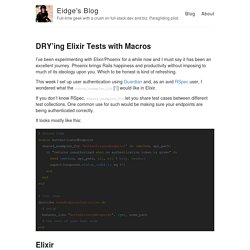 Phoenix brings Rails happiness and productivity without imposing to much of its ideology upon you. Which to be honest is kind of refreshing. This week I set up user authentication using Guardian and, as an avid RSpec user, I wondered what the shared_examples_for [1] would like in Elixir. If you don’t know RSpec, shared_examples_for let you share test cases between different test collections. One common use for such would be making sure your endpoints are being authenticated correctly. It looks mostly like this: A lifetime with Ruby has grown in me a distaste for DSLs, albeit good looking, when used too often they tend to obscure simple concepts.

With Elixir, I didn't want to add another DSL just for sharing tests across units. Let’s start with a simple, vanilla exUnit test: While this works, my OCD can’t bare the amount of repetition that’s going around. Sans titre. Workshop - All Aboard The Elixir Express! - RailsConf 2014. Is the Elixir ecosystem “mature” enough for production apps? Learn elixir in Y Minutes. Elixir is a modern functional language built on top of the Erlang VM. 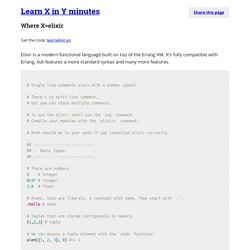 It’s fully compatible with Erlang, but features a more standard syntax and many more features. Got a suggestion? A correction, perhaps? Open an Issue on the Github Repo, or make a pull request yourself! Programming Elixir. Elixir is a modern, functional programming language designed for high availability and concurrency. 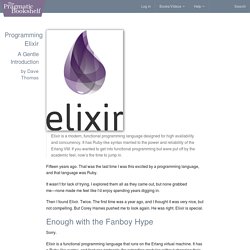 It has Ruby-like syntax married to the power and reliability of the Erlang VM. If you wanted to get into functional programming but were put off by the academic feel, now’s the time to jump in. Fifteen years ago. That was the last time I was this excited by a programming language, and that language was Ruby. Études for Elixir.