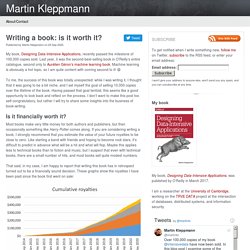 My book, Designing Data-Intensive Applications, recently passed the milestone of 100,000 copies sold. [Thread] In 2018 I wrote a technical eBook about Web Scraping with Java here is my experience and some metrics 1/9. Notes on Technical Writing – mkaz.blog. Over the past year, I’ve worked on and off documentation for WordPress. 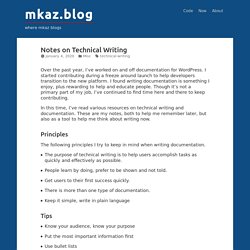 I started contributing during a freeze around launch to help developers transition to the new platform. I found writing documentation is something I enjoy, plus rewarding to help and educate people. 13 Tips for Writing a Technical Book. I spent the last year and a half writing my first technical book for O’Reilly (Programming TypeScript). 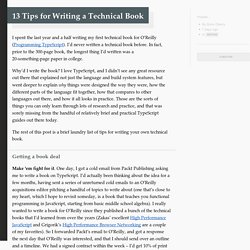 I’d never written a technical book before. In fact, prior to the 300-page book, the longest thing I’d written was a 20-something-page paper in college. Why’d I write the book? I love TypeScript, and I didn’t see any great resource out there that explained not just the language and build system features, but went deeper to explain why things were designed the way they were, how the different parts of the language fit together, how that compares to other languages out there, and how it all looks in practice. Those are the sorts of things you can only learn through lots of research and practice, and that was sorely missing from the handful of relatively brief and practical TypeScript guides out there today. The rest of this post is a brief laundry list of tips for writing your own technical book. Writing a Technical Book for Manning. Introduction From 2017 until 2019 I spent a lot of my spare time writing a technical book: HTTP/2 in Action for Manning - a well-known publisher of IT books. 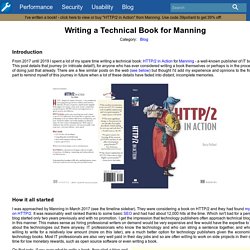 This post details that journey (in intricate detail!) , for anyone who has ever considered writing a book themselves or perhaps is in the process of of doing just that already. There are a few similar posts on the web (see below) but thought I'd add my experience and opinions to the fray, in part to remind myself of this journey in future when a lot of these details have faded into distant, incomplete memories. Online Character Count Tool. Authors & Advertisers Blog Post: The Goodreads Author’s Marketing Checklist. These days, writers no longer need to sign with a traditional publishing house to get their stories into the world. 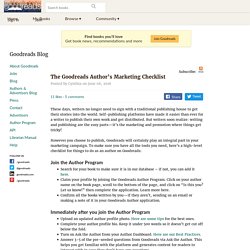 Self-publishing platforms have made it easier than ever for a writer to publish their own work and get distributed. But writers soon realize: writing and publishing are the easy parts—it’s the marketing and promotion where things get tricky! However you choose to publish, Goodreads will certainly play an integral part in your marketing campaign. The Economics of Writing a Technical Book. How we got our 2-year-old repo trending on GitHub in just 48 hours. Github has made it easy for millions of developers to publicize their projects so they can attract users and collaborators. 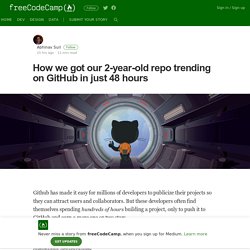 But these developers often find themselves spending hundreds of hours building a project, only to push it to GitHub and earn a mere one or two stars. Markdown Tables generator - TablesGenerator.com. "You Don't Know JS" (book series) by Kyle Simpson. Announcing Understanding ECMAScript 6 - NCZOnline.

For almost two years, I’ve been keeping notes on the side about ECMAScript 6 features. 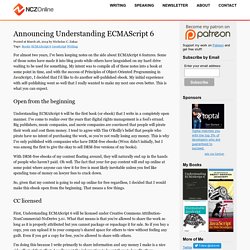 Some of those notes have made it into blog posts while others have languished on my hard drive waiting to be used for something. My intent was to compile all of these notes into a book at some point in time, and with the success of Principles of Object-Oriented Programming in JavaScript1, I decided that I’d like to do another self-published ebook. My initial experience with self-publishing went so well that I really wanted to make my next one even better. This is what you can expect. Open from the beginning Understanding ECMAScript 6 will be the first book (or ebook) that I write in a completely open manner. With DRM-free ebooks of my content floating around, they will naturally end up in the hands of people who haven’t paid. 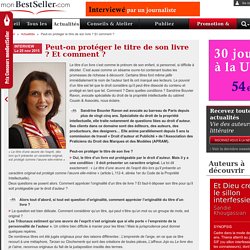 How to Write an Ebook. So you want to write an ebook. 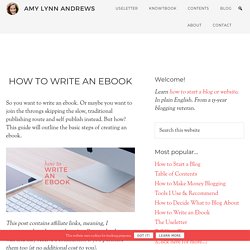 Or maybe you want to join the throngs skipping the slow, traditional publishing route and self publish instead. But how? This guide will outline the basic steps of creating an ebook. Print vs. Digital Report – Author Earnings. In our initial Author Earnings report, we revealed some amazing data on the health of self-publishing on the Kindle Store [link]. 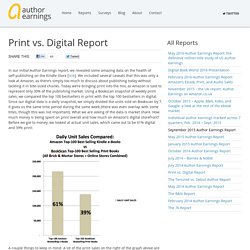 We included several caveats that this was only a look at Amazon, as there’s simply too much to discuss about publishing today without tackling it in bite-sized chunks. Today we’re bringing print into the mix, as Amazon is said to represent only 30% of the publishing market. Using a Bookscan snapshot of weekly print sales, we compared the top 100 bestsellers in print with the top 100 bestsellers in digital.

Since our digital data is a daily snapshot, we simply divided the units sold on Bookscan by 7. It gives us the same time period during the same week (there was even overlap with some titles, though this was not important). A couple things to keep in mind: A lot of the print sales on the right of the graph above are occurring on Amazon (more occur there than any other single source). We laughed when it came out right at 70/30. Yikes. How I make $400 a month in Passive Income by Self-Publishing – Medium.

I’m the author of Behind the Ivy Curtain: A Data Driven Guide to Elite College Admissions : First, a bit of background. I went to Yale and learned about elite college admissions from reading forums like College Confidential. Considerations when asked to write a book? Authority. 2nd Digital Edition And no, you don’t have to be famous or have a huge online following. In less than a year I’ve made over $150,000 from self-published books. Plenty of my friends have made far more, all writing on topics so small and targeted a traditional publisher wouldn’t consider it. Many of them started—just like me—without an audience. So you are writing a tech book with sample code…

So you are writing a tech book with sample code… This post is the result of frustration I have with code examples in some tech books. It is in your interest as an author to follow these rules as it might make your book relevant for longer and result in higher sales of your work. I know, I know, all these rules seem obvious but for some reason the number of books that don’t follow these rules is still “too damn high” to paraphrase a popular maymay so I guess someone has to say it. Follow Joel’s test rule #2.

Getting your sample code to run should be a single action. Remember that if your book sells 1000 copies and each reader spends an hour trying to figure out the dev environment, you’ve wasted 1000 man-hours.