Why Should Artists Get Paid? The shame of acceptance around asking artists to work for free Sainsbury’s made a big error last week. 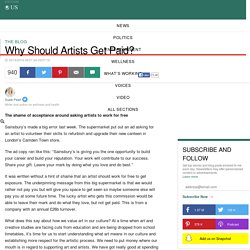 The supermarket put out an ad asking for an artist to volunteer their skills to refurbish and upgrade their new canteen in London’s Camden Town store. The ad copy ran like this: “Sainsbury’s is giving you the one opportunity to build your career and build your reputation. Study Says Making Art Reduces Stress, Even If You Kind Of Suck At It. The ABC of Art Criticism: Some Recent How To’s. It has often been said that writing about art is like dancing about architecture. 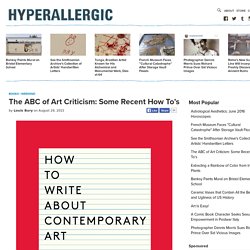 Nearly as often, it has also then been said: But I’m going to do it anyway. Whether or not the dance analogy captures all the futilities and elations of the endeavor, writing about art, experience proves, is an activity unlikely to abate. Indeed, as art’s institutional and popular reach has grown ever more expansive in the early 21st century, the proliferation of adjunct written discourses has perhaps never been greater.

When everyone is an artist, everyone is also eventually pressed into service as an art writer. Of course, just as not every artist is a good artist, not every art writer is a good or even serviceable art writer. Gilda Williams’s admirably practical and instructive 2014 primer, How to Write About Contemporary Art, addresses this and other art writing disparities. Of all the art criticism that inspires Williams, she is most excited by writing that takes risks, critico-fiction in particular. Bronze Sculpture of Selfie-Snappers Stirs a Storm in Sugar Land. It may very well be the first public sculpture that commemorates the act of taking a selfie. 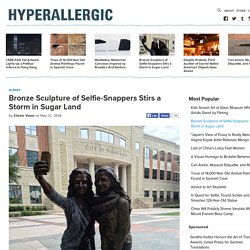 The Houston suburb of Sugar Land recently installed a bronze statue of two girls grinning as one raises her smartphone to snap a photograph as part of a 10-piece, citywide public art donation intended to “provide and/or support activities and facilities that enrich the artistic, cultural, educational, and historical character of Sugar Land.” The pair isn’t posing at just any place, either, but in Sugar Land Town Square’s public plaza. They sorority squat slightly just a stone’s throw away from the steps of City Hall so the stately building serves as their backdrop. The Mystery of the Painter of Light™ Thomas Kinkade was a painter of cabins, lighthouses, and improvable sunsets. 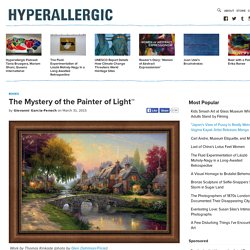 He was an avowed evangelical Christian who fortified his saccharine landscapes with passages from the scriptures. In terms of sales, he was literally the most successful living artist in the world. People Stick Their Heads into Miniature Galleries to Become Part of World Famous Art Exhibits. If you’re an art fanatic, then maybe you nurture a dream of one day seeing a piece of your own displayed and admired in a famous art gallery. 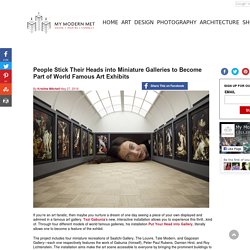 Tezi Gabunia’s new, interactive installation allows you to experience this thrill...kind of. Through four different models of world famous galleries, his installation Put Your Head into Gallery, literally allows one to become a feature of the exhibit. Creativity. 15 Shimmering Questions About Glitter, Answered. Everyone has feelings about glitter. 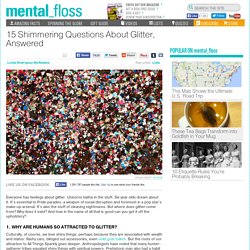 40 Of The Most Powerful Photographs Ever Taken. » Day of the Dead, Sugar Skulls, and the Question of Cultural Appropriation. Over the past several years, sugar skulls (Spanish: calaveras de azúcar, or simply Calaveras for short) have become increasingly popular in art and fashion. 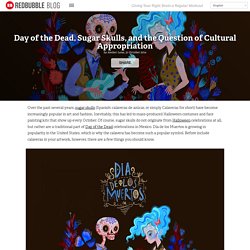 Inevitably, this has led to mass-produced Halloween costumes and face painting kits that show up every October. Slashed and Hidden from Sight: The Strange Power of Cursed Paintings. Edwin Landseer, “Man Proposes, God Disposes” (1864), oil painting (via Wikimedia) Can a painting drive a person to madness? 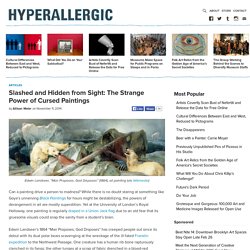 Art Forgery And What It Takes To Master A Skill. When it comes to cooking, I know how to make a few things. 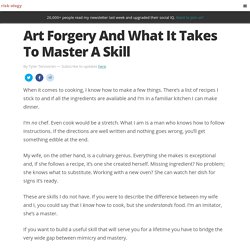 There’s a list of recipes I stick to and if all the ingredients are available and I’m in a familiar kitchen I can make dinner. I’m no chef. Even cook would be a stretch. What I am is a man who knows how to follow instructions. Cutouts against natural colors. The Art of Creativity. Has this ever happened to you? You're out for a jog, completely relaxed, your mind a pleasant blank. Then all of a sudden the solution to a problem you've been mulling over for weeks pops into your head. You can't help but wonder why you didn't think of it before. In such moments you've made contact with the creative spirit, that elusive muse of good—and sometimes great—ideas. Yet it is more than an occasional insight. That flash of inspiration is the final moment of a process marked by distinctive stages—the basic steps in creative problem-solving. Artists Speak Out For Women’s Rights In Spanish Exhibition. Taking Note: To Play’s the Thing. 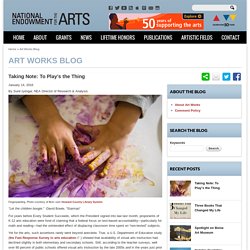 " -David Bowie, “Starman” For years before Every Student Succeeds, which the President signed into law last month, proponents of K-12 arts education were fond of claiming that a federal focus on test-based accountability—particularly for math and reading—had the unintended effect of displacing classroom time spent on “non-tested” subjects. Yet for the arts, such assertions rarely went beyond anecdote. True, a U.S. Department of Education study (the Fast Response Survey in arts education) showed that availability of visual arts instruction had declined slightly in both elementary and secondary schools.

Other news was also mixed. Last year, the NEA used an unlikely source to probe the question further: the U.S. Now comes a research article, published this month in AERA Open (a product of the American Educational Research Association), which authoritatively tracks the arts’ presence in U.S. public kindergarten classrooms from 1998 to 2010. There Are Only 12 Master Penmen in the World, This Guy Is the Youngest. My grandmother has some of the most beautiful penmanship I have ever seen. Her handwritten letters are something that I’ve always cherished, especially now that our world is becoming increasingly overrun by technology.

For centuries, the wealthy and educated were recognized by their ability to create gorgeous handwriting on paper. But these days, handwriting and calligraphy are a dying art form. The act of putting pen to paper is happening less frequently. Chuck Close Filter by Scott Blake. This 4-Year-Old Makes Paper Dresses With Her Mom. By Ilana Wiles, Mommy Shorts I started following @2sisters_angie a little over a year ago. Back then she was posting the typical stuff you see from moms on Instagram -- pics of her daughter at the park, pics of her daughter eating breakfast and lots of photos of her daughter playing dress-up. You know, the same stuff I post. Then, about nine months ago, Angie's feed started to change. 4 Reasons to Mimic the Masters—and 3 Reasons Not to. If I say you should copy another writer, would you call the plagiarism police and poke me in a padded cell? Banksy: Geographic profiling 'proves' artist really is Robin Gunningham, according to scientists.

“Geographic profiling”, a technique used to catch serial criminals, has proved that the elusive artist Banksy really is Robin Gunningham, according to academic research. Scientists at Queen Mary University of London claim to have “tagged” Banksy, by identifying a pattern between the locations where his graffiti artworks most frequently appear and addresses with a close association to Gunningham, named as Banksy in a 2008 newspaper investigation. Want Your Children to Survive The Future? Send Them to Art School. The Top 10 Mistakes Made By Art Students. 5 Big Benefits Of Being A Doodler. How to Tell Good Abstract Art from Bad. Mother's Day Turns 100: Its Surprisingly Dark History.