Charter a Private Jet Today. Believe the Magic on This Holiday Season Christmas Train Ride. All Aboard THE POLAR EXPRESS™ Train Ride! 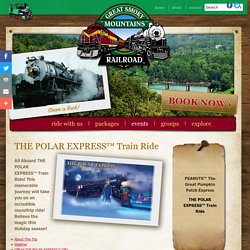 This memorable journey will take you on an incredible roundtrip ride! Believe the magic this Holiday season! About This Trip. Virtual tours: Buckingham Palace. 360 degree interactive panorama of The Library, Sissinghurst Castle, Kent. 360 degree interactive panorama of The Courtyard at Sissinghurst Castle, Kent. 360 degree interactive panorama of The Rose Garden at Sissinghurst Castle, Kent. Blair Castle. Plan & Book A Perfect Trip With Our Itinerary Planner - RoutePerfect. Best luxury destinations in Italy - Business Insider. Untitled. Press Release - updated: May 12, 2020 11:20 EDT NEW YORK, May 11, 2020 (Newswire.com) - Americans are renouncing their citizenship at the highest levels on record, according to research by the Enrolled Agents and accountants Bambridge Accountants New York. · 2,909 Americans gave up their citizenship in the first 3 months of 2020 · Showing a 1,015% increase on the prior 3 months to December 2019 where only 261 cases were recorded · 2,072 Americans gave up their citizenship in 2019 in total · This is the highest quarter on record, the previous record was 2,365 cases for the fourth quarter of 2016 · It seems that the pandemic has motivated U.S. expats to cut ties and avoid the onerous tax reporting Americans must pay a $2,350 government fee to renounce their citizenship, and those based overseas must do so in person at the U.S. 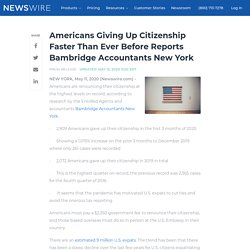 There are an estimated 9 million U.S. expats. Under the IRS rules (section 6039g), every three months the U.S. Untitled. Untitled. John Truett made millions as an oil and gas CEO, but since moving to Teton County, Wyoming — an area inhabited by an increasing number of wealthy transplants like himself — his biggest passion has been becoming a “normal person.” 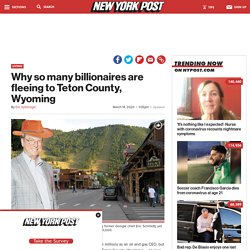 Untitled. From a stunning beach resort built on stilts in a Mangrove forest in Mexico, to a contemporary tower in Tokyo, I have assembled a long list of highly anticipated hotel openings for 2020 around the world. 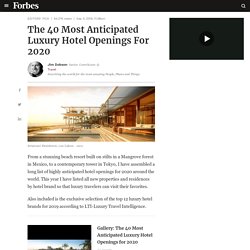 This year I have listed all new properties and residences by hotel brand so that luxury travelers can visit their favorites. Also included is the exclusive selection of the top 12 luxury hotel brands for 2019 according to LTI-Luxury Travel Intelligence. Cabo San Lucas. Untitled. Untitled. Untitled. Untitled. Opening humanity's next frontier. Find what moves you. One Global Coworking Membership. ICONSPEAK. ‘I hate going back to the U.S.’: This 69-year-old left Utah for Portugal, where you can ‘live well’ on $2,000 a month. Find what moves you. Tivoli Gardens - Tivoli. Yacht Owners Ditch Life on Land for the High Seas.

Five places abroad where you can retire on just $30,000 a year. If you’ve been racking your brain about where to retire on a budget, it might be time to think outside the U.S. 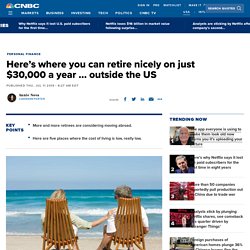 A new report by International Living, which publishes information about living abroad, lists destinations where you can coast on less than $30,000 a year. To be sure, retiring in a new country will require studying up on the tax implications along with pulling off some other logistical maneuvering. But for many older Americans the work will be well worth finding a new, affordable place to spend their golden years. The average monthly Social Security check is $1,404, and more than 40% of single adults receive more than 90% of their income from that check, according to the government.

Here are the cities where that check will go far, according to International Living. 1.Puerto Viejo, Costa Rica. The Norwegian island where the sun shines 24 hours a day and locals want to BAN TIME. How to Travel: 21 Contrarian Rules. (Photo credit: Moyan Brenn) This is a tactical post on travel from Ryan Holiday, who’s written on this blog before about the pragmatism of Stoicism and lessons learned as Director of Marketing for American Apparel. 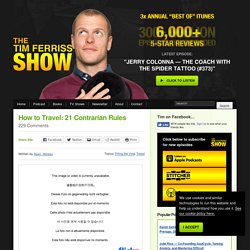 To his 21 rules, I’ve added a few of my own tricks. Please share your own rules and tips in the comments! Enter Ryan Holiday. The Top 10 Safest Countries To Be In If World War 3 Breaks Out. Luxury Maldives hotel hiring intern to rescue turtles, expenses covered. The 10 Best Apps to Pack for Business Travel. July 13, 2015 4 min read Opinions expressed by Entrepreneur contributors are their own. 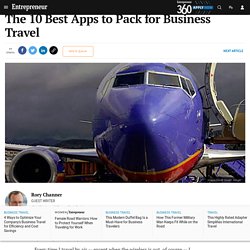 Every time I travel by air -- except when the wireless is out, of course -- I feel grateful to have my phone. The reason? Absolutely everything these days is in the cloud -- just like I am! This Road Warrior Shares Business-Travel Productivity Tools. Being on the road is hard. 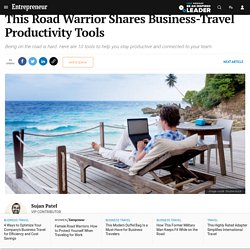 Here are 10 tools to help you stay productive and connected to your team. January 30, 2017 6 min read. Arctic Fox Igloos. Yahoo fait dÃ©sormais partie dâOath. Vienna has been named the city with the best quality of life for a 10th consecutive year in a survey published Wednesday. 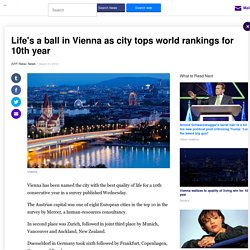 The Austrian capital was one of eight European cities in the top 10 in the survey by Mercer, a human-resources consultancy. In second place was Zurich, followed in joint third place by Munich, Vancouver and Auckland, New Zealand. Duesseldorf in Germany took sixth followed by Frankfurt, Copenhagen, Geneva and Basel. London was ranked 41st and Paris was 39th, although the study, carried out between September and November 2018, did not take into account France's 'yellow vest' anti-government protests.

There’s your average, everyday water fountains and then there are these guys. 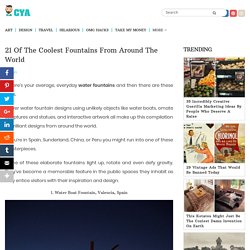 Clever water fountain designs using unlikely objects like water boats, ornate sculptures and statues, and interactive artwork all make up this compilation of brilliant designs from around the world. If you’re in Spain, Sunderland, China, or Peru you might run into one of these masterpieces. Some of these elaborate fountains light up, rotate and even defy gravity.

They’ve become a memorable feature in the public spaces they inhabit as they entice visitors with their inspiration and design. 1. Photo credit: Margolum Smargol 2. Photo credit: commons.wikimedia.org 3. Credit artist: William Pye 4. 5. Photo credit: unknown 6. Photo credit: prachi1996 7. 8.’Nine Floating Fountains’, Osaka, Japan Photo credit: Isamu Noguchi 9. I went to Bangkok for one reason. To eat at Jai Fai. She has been featured on various TV shows and YouTube channels. From Aman to Four Seasons: the 12 best luxury hotels, ranked by scienc. 50 photos show how obsessed the wealthy are with underground mansions. The Outbound Collective. 10 Well-Known Places That’ve Been Hiding a Secret For a Long Time. Emirates flight attendant tips for staying fresh on long-haul flights. Behold the Longest Around-the-World Cruise: 245 days and 59 Countries.