5 simple chemistry facts that everyone should understand before talking about science. One of the most ludicrous things about the anti-science movement is the enormous number of arguments that are based on a lack of knowledge about high school level chemistry. 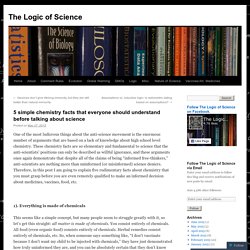 These chemistry facts are so elementary and fundamental to science that the anti-scientists’ positions can only be described as willful ignorance, and these arguments once again demonstrate that despite all of the claims of being “informed free-thinkers,” anti-scientists are nothing more than uninformed (or misinformed) science deniers.

Compound Interest - A Guide to Common Household Plastics. Click to enlarge Plastic is everywhere in our day to day lives – but, of course, ‘plastic’ is just a catch-all term for a range of different chemical substances. 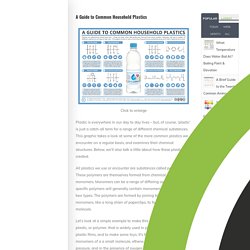 This graphic takes a look at some of the more common plastics we encounter on a regular basis, and examines their chemical structures. Below, we’ll also talk a little about how these plastics are created. All plastics we use or encounter are substances called polymers. These polymers are themselves formed from chemical entities called monomers. Let’s look at a simple example to make this clearer. Other conditions can also be used to produce versions of the same polymer with varying properties; polyethene comes in a number of different varieties, such as high density polyethene (HDPE) or low density polyethene (LDPE).

Some polymers are better known by their trade names or abbreviations than their full chemical names. Another issue with plastics is their disposal. Enjoyed this post & graphic? References & Further Reading. Untitled. Click to enlarge Glassware in the laboratory comes in a range of different shapes and sizes, and is used for a number of purposes. 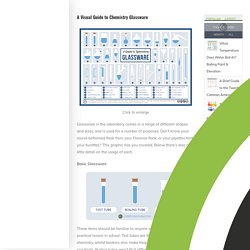 Don’t know your round-bottomed flask from your Florence flask, or your pipettes from your burettes? This graphic has you covered. The Metal Reactivity Series. Click to enlarge The metal reactivity series is a commonly taught concept in chemistry, placing the metals, as its name suggests, in order of reactivity from most reactive to least reactive. 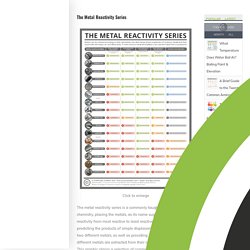 It’s also a useful tool in predicting the products of simple displacement reactions involving two different metals, as well as providing an insight into why different metals are extracted from their ores in different manners. This graphic places a selection of common metals into order of reactivity, as well as showing their reactions with air, water and steam.

Metals have a range of reactivities – to illustrate this, you have to look no further than the classic alkali metals in water demonstration commonly used in chemistry classes. Periodicity: Trends in the Periodic Table. Click to enlarge This graphic looks at several properties of elements in the Periodic Table. 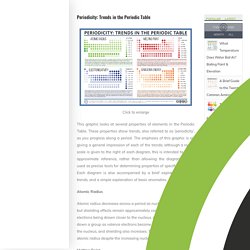 These properties show trends, also referred to as ‘periodicity’, as you progress along a period. What Causes the Colour of Gemstones? Click to enlarge There are a wide range of gemstones used in jewellery, with each having its own characteristic colour – or, in some cases, a range of colours. 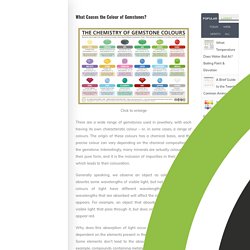 The origin of these colours has a chemical basis, and the precise colour can vary depending on the chemical composition of the gemstone. Crime Scene Chemistry – Luminol, Blood & Horseradish. Click to enlarge Anyone who’s watched CSI or similar shows knows that, whenever the investigating team are on the scene of a gruesome and bloody murder, luminol solution gets sprayed liberally over absolutely everything. 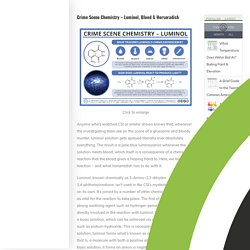 The result is a pale blue luminescence whenever the solution meets blood, which itself is a consequence of a chemical reaction that the blood gives a helping hand to. Here, we look at this reaction – and what horseradish has to do with it. Luminol, known chemically as 5-Amino-2,3-dihydro-1,4-phthalazinedione, isn’t used in the CSI’s mysterious spray bottle on its own. It’s joined by a number of other chemicals which are just as vital for the reaction to take place. Answers: What is graphene, and why does it matter? This perfect carbon lattice makes graphene both ultra-thin and super-strong. 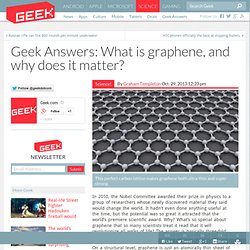 In 2010, the Nobel Committee awarded their prize in physics to a group of researchers whose newly discovered material they said would change the world. It hadn’t even done anything useful at the time, but the potential was so great it attracted that the world’s premiere scientific award. Why? What’s so special about graphene that so many scientists treat it read that it will revolutionize all walks of life? The answer is basically three-fold: strength, flexibility, and conductivity. The mysterious case of the missing noble gas. D. 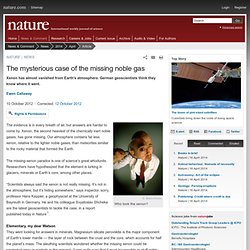 Waldorf/Getty Who took the xenon? The evidence is in every breath of air, but answers are harder to come by. Xenon, the second heaviest of the chemically inert noble gases, has gone missing. Our atmosphere contains far less xenon, relative to the lighter noble gases, than meteorites similiar to the rocky material that formed the Earth. The missing-xenon paradox is one of science’s great whodunits. “Scientists always said the xenon is not really missing. Elementary, my dear Watson They went looking for answers in minerals. The researchers tried dissolving xenon and argon in perovskite at temperatures exceeding 1,600 ºC and pressures about 250,000 times those at sea level. Those results may sound disappointing, but they gave Keppler and Shcheka an idea.

More than 4 billion years ago, Earth was molten. Where's the xenon? Nature's Ewen Callaway asks Hans Keppler where all the xenon went. “This is completely different from what everybody else is saying.