White men radicalised online were amongst the 'silent majority' who chose Donald Trump. When President-elect Donald Trump named Steve Bannon to a top spot in his administration, stoking fears of many Americans that he would bring white nationalism to the White House. 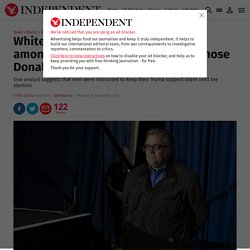 Spying on Occupy Activists. (Editor’s Note: This article is derived from research and writing conducted by Beau Hodai, published by DBA Press and the Center for Media and Democracy in the report “Dissent or Terror: How the Nation’s Counter Terrorism Apparatus, in Partnership with Corporate America, Turned on Occupy Wall Street.” ) OVER THE LAST FEW YEARS, the Department of Homeland Security and local law enforcement officers have engaged in widespread domestic spying on Occupy Wall Street activists, among others, on the shaky premise that these activists pose a terrorist threat. 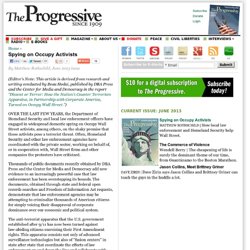 Often, Homeland Security and other law enforcement agencies have coordinated with the private sector, working on behalf of, or in cooperation with, Wall Street firms and other companies the protesters have criticized. An Open Letter to The Occupy Wall Street Movement: You Were Right All Along. Photo: Occupy Wall Street Facebook page There is a vast total-information-awareness surveillance network made up of global corporations and subservient (captured) governments engaging in the systematic infiltration and suppression of social justice activist groups. 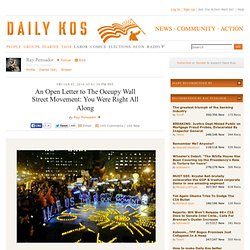 Their main method of control is the implementation of divide-and-conquer strategies. When it comes to activists, their approach is to apply these strategies to what they have defined as four distinct groups: Radicals, who see the system as corrupt are marginalized and discredited with character assassination techniques. Realists, who can be convinced that real change is not possible. A Timeline Of Mass Shootings In The US Since Columbine. On Friday morning, 27 people were reportedly shot and killed at Sandy Hook elementary school in Newtown, CT. 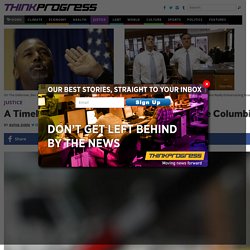 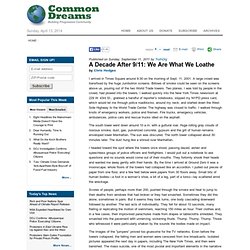 A large crowd was transfixed by the huge Jumbotron screens. Billows of smoke could be seen on the screens above us, pouring out of the two World Trade towers. Two planes, I was told by people in the crowd, had plowed into the towers. I walked quickly into the New York Times newsroom at 229 W. 43rd St., grabbed a handful of reporter’s notebooks, slipped my NYPD press card, which would let me through police roadblocks, around my neck, and started down the West Side Highway to the World Trade Center.

The highway was closed to traffic. The south tower went down around 10 a.m. with a guttural roar. I headed toward the spot where the towers once stood, passing dazed, ashen and speechless groups of police officers and firefighters. Scores of people, perhaps more than 200, pushed through the smoke and heat to jump to their deaths from windows that had broken or they had smashed. As Wordsworth wrote: © 2011 Chris Hedges. 9/11 Truth: How conspiracy theorists react to apostates like Charlie Veitch.

The man who created the single most influential piece of propaganda about the 9/11 conspiracy is now ambivalent about the movement he helped make popular. 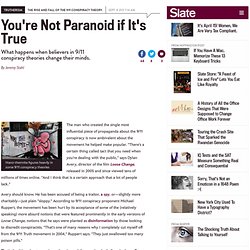 "There's a certain thing called tact that you need when you're dealing with the public," says Dylan Avery, director of the film Loose Change, released in 2005 and since viewed tens of millions of times online. "And I think that is a certain approach that a lot of people lack. " Avery should know. Chick-fil-A appreciation day brings huge crowds to fast-food chain. In an unusual act of fast-food activism, Americans opposed to same-sex marriage were encouraged to dine at the chain restaurant Chick-fil-A today. Will The Real Mitt Romney Please Stand Up (feat. Eminem) More Americans Believe Obama is Muslim Than in Theory of Evolution. More Americans Believe Obama Is Muslim Than in Theory of Evolution By Slade Sohmer June 4, 2012 at 12:42 pm Evolution, the silly little theory that suggests the origin of species can be traced back from a universal common ancestor nearly four billion years ago and has adapted via natural selection, is not exactly a widely held belief here in the God-fearing States of ‘Murrica. 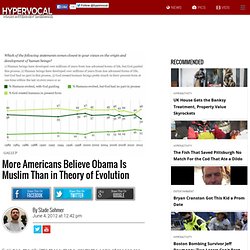 In fact, of all the countries in the Western world, the United States trails every single nation except for Turkey when it comes to our believing human beings evolved from earlier species of animals. A new Gallup survey underscores this finding: “Forty-six percent of Americans believe in the creationist view that God created humans in their present form at one time within the last 10,000 years. Yup, ONLY 15 PERCENT OF AMERICANS SURVEYED BELIEVE IN AN EVOLUTIONARY PROCESS IN WHICH GOD PLAYED NO ROLE. Video of Blackwater Contractors Driving Over Iraqi Woman. Robert Creamer: Why Growing Income Inequality Is Bad for America. The recent controversy over the huge bonuses at financial firms like AIG and J.P. 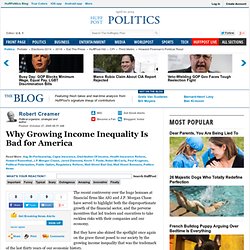 Morgan Chase have served to highlight both the disproportionate growth of the financial sector, and the perverse incentives that led traders and executives to take reckless risks with their companies and our economy.