The thieves made away with five iPads worth more than $3,000 (£1,865) from Microsoft's research and development centre in Mountain View, California, over Christmas. Microsoft's flagship collection of smartphones and tablet computers remained untouched in the raid, according to Mountain View police who spoke to The Register. Red-faced Microsoft employees were presumably relieved to find their own company's gadgets had been overlooked when they returned to work after the Christmas holidays – but immediately reported the iPad thefts to police. News of the raid came to light after a Palo Alto Daily Post story on 4 January, headed "Microsoft says somebody stole its Apple iPads".

The final line of the story included the intriguing nugget: "No Microsoft products were reported stolen. " Beyond a joke: the truth about why we laugh. Consider the bizarre events of the 1962 outbreak of contagious laughter in Tanganyika (now Tanzania). 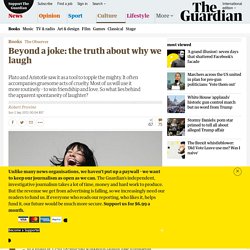 What began as an isolated fit of laughter in a group of 12-to 18-year-old schoolgirls rapidly rose to epidemic proportions. Contagious laughter propagated from one individual to the next, eventually infecting adjacent communities. Like an influenza outbreak, the laughter epidemic was so severe that it required the closing of at least 14 schools and afflicted about 1,000 people. Fluctuating in intensity, it lasted for around two and a half years. A psychogenic, hysterical origin of the epidemic was established after excluding alternatives such as toxic reaction and encephalitis. Laughter epidemics, big and small, are universal. Laughter yoga, an innovation of Madan Kataria of Mumbai, taps contagious laughter for his secular Laughing Clubs International. The use of laughter to evoke laughter is familiar to viewers of television sitcoms.

On average, men are the best laugh getters. Japan and blood types: Does it determine personality? 4 November 2012Last updated at 19:41 ET By Ruth Evans Tokyo Are you A, B, O or AB? 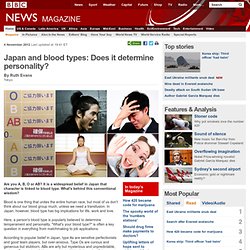 It is a widespread belief in Japan that character is linked to blood type. What's behind this conventional wisdom? Blood is one thing that unites the entire human race, but most of us don't think about our blood group much, unless we need a transfusion. In Japan, however, blood type has big implications for life, work and love. The 11 Best/Worst Vagina Tattoos Of All Time [NSFW] Man saved from croc shot in error. A man has been accidentally shot by a rescuer who was trying to free him from the jaws of a crocodile in northern Australia. 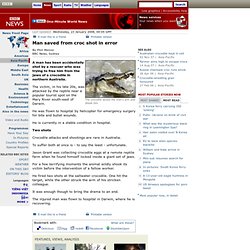 The victim, in his late 20s, was attacked by the reptile near a popular tourist spot on the Mary River south-east of Darwin. He was flown to hospital by helicopter for emergency surgery for bite and bullet wounds. He is currently in a stable condition in hospital. Two shots Crocodile attacks and shootings are rare in Australia. To suffer both at once is - to say the least - unfortunate. Jason Grant was collecting crocodile eggs at a remote reptile farm when he found himself locked inside a giant set of jaws. For a few terrifying moments the animal wildly shook its victim before the intervention of a fellow worker. He fired two shots at the saltwater crocodile.

It was enough though to bring the drama to an end. The injured man was flown to hospital in Darwin, where he is recovering. Farmer bites cobra to death in Nepal. 23 August 2012Last updated at 12:46 ET The reptile was not among the snake species listed as endangered in Nepal A Nepali farmer who was bitten by a cobra in his rice paddy field has killed the snake by repeatedly biting it in return. 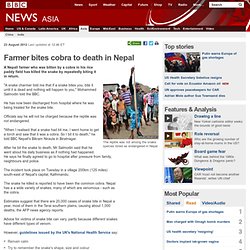 "A snake charmer told me that if a snake bites you, bite it until it is dead and nothing will happen to you," Mohammed Salmodin told the BBC. He has now been discharged from hospital where he was being treated for the snake bite. Officials say he will not be charged because the reptile was not endangered. Ranger narrowly escapes crocodile. Frankie Boyle letter about BBC in full. Cannabis-laced brownies served at California funeral. Cannabis-laced brownies served at a south California funeral sent three people to the emergency room over the weekend, Huntington Beach police said. 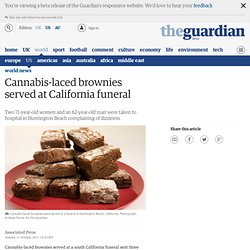 Two 71-year-old women and an 82-year-old man were taken to hospital on Saturday following a friend's memorial service, where a tray of pot brownies was offered. They complained of nausea, dizziness and an inability to stand without assistance. The three residents of Huntington Beach and Newport Beach didn't know the cannabis-laced brownies were being offered in memory of their friend, who ate weed brownies. 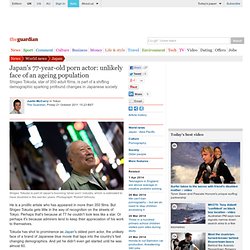 Photograph: Robert Gilhooly He is a prolific artiste who has appeared in more than 350 films. But Shigeo Tokuda gets little in the way of recognition on the streets of Tokyo. Moustaches Make A Difference. Une belle opération et campagne de publicité décalée par TBWA Singapore : « Les moustaches font la différence ». 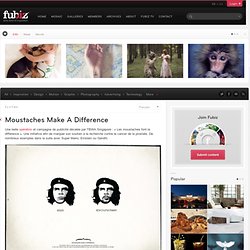