Major Depression Disorder reveals deep feelings of sadness, emptiness, worthlessness and hopelessness. It can sneak up on anyone anytime unexpectedly. It is harsh enough to hinder with a person’s life.

Severe depression clings onto a person tightly like a prisoner.

Please be noted that it is important to always take suicide threat seriously even though you may think it could be done to attract attention and even if there is no other signs of depression.

To know more about this disorder. What are the symptoms to look out for?

Let's talk about depression. This year, World Health Day on Friday (Apr 7) throws the spotlight on depression. The campaign - Depression: Let’s Talk - launched in 2016 implies that it is not well spoken about and indeed requires us to talk more about the topic. Depression is one of the most common mental illnesses known. According to the World Health Organization (WHO), it can affect 6.9 per cent of the population. A local study in 2010 showed that about six people out of a 100 in Singapore will develop this illness over their lifetimes. Depression is a disorder society can sympathise with, compared to other mental illnesses. One of the reasons for this is that depression appears to most people as a plausible illness.

Depression can present itself as a form of extreme sadness, with a risk of self-destruction. Pop culture usually portrays depression far better than schizophrenia. Mental health literacy studies have also indicated much better understanding of depression compared to schizophrenia for the same reasons. Major Depressive Disorder - Common Mental Illness Definitions and Descriptions. Definition and common characteristics of Major Depressive Disorder A major depressive disorder is diagnosed if there has occurred one or more “major depressive episodes” (Diagnostic and Statistical Manual, 4th Edition, of the American Psychiatric Association, DSM-IV). 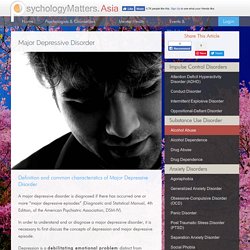 According to the DSM-IV, three factors must be considered: intensity, duration, and context. Intensity Duration Context Prevalence of Major Depressive Disorder Etiology (Causes) References Patten, S. How to tell if someone has depression. SINGAPORE: The suicide death of SHINee lead singer Kim Jonghyun on Monday (Dec 18) has cast the spotlight on the pressure K-pop artistes face. But it has also brought depression, clinically known as major depressive disorder, to the fore. In Singapore, depression is one of the top three mental health disorders, indicated the Singapore Mental Health Study conducted in 2010 by the Institute of Mental Health (IMH). The findings from the next survey, which started in 2015, are likely to be released in August 2018, according to IMH.

The 2010 survey showed that depression affected over 57,000 adult men and about 102,000 adult women during their lifetime. This equated to 5.8 per cent of the adult population in Singapore that has suffered from depression at some time in their lives. The mental condition is more than feeling sad or gloomy. However, depression is all-encompassing.

"However, for some people, the symptoms may be hidden," said Dr Wang. All suicidal gestures should be taken seriously. Subtle Signs Of Depression That Everyone Needs To Know About - The Singapore Women's Weekly. 12 Uncommon Symptoms Of Depression You May Be Overlooking. (Image: Creative Commons) What are some less common somatic symptoms of depression? 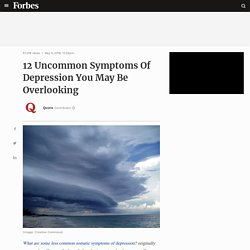 Originally appeared on Quora - the knowledge sharing network where compelling questions are answered by people with unique insights. Answer by Mike Leary, psychotherapist in private practice, on Quora: Many people know of depression from experiencing it themselves or seeing friends or coworkers struggle with lethargy, trouble concentrating, and chronic fatigue. It's this low mood over a long period of time most people identify as depression. But depression comes in many forms and displays a wide range of symptoms depending on the type, the duration, severity, and the precipitating cause.