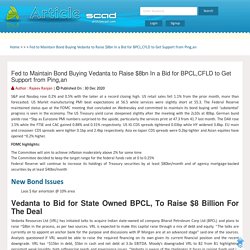 US retail sales fell 1.1% from the prior month, more than forecasted. US Markit manufacturing PMI beat expectations at 56.5 while services were slightly short at 55.3. The Federal Reserve maintained status quo at the FOMC meeting that concluded on Wednesday and committed to maintain its bond buying until ‘substantial’ progress is seen in the economy. FOMC highlights: The Committee will aim to achieve inflation moderately above 2% for some time The Committee decided to keep the target range for the federal funds rate at 0 to 0.25% Federal Reserve will continue to increase its holdings of Treasury securities by at least $80bn/month and of agency mortgage-backed securities by at least $40bn/month. 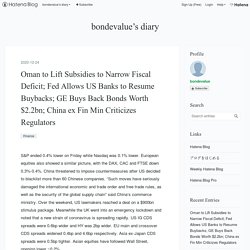 European equities also showed a similar picture, with the DAX, CAC and FTSE down 0.3%-0.4%. China threatened to impose countermeasures after US decided to blacklist more than 60 Chinese companies. “Such moves have seriously damaged the international economic and trade order and free trade rules, as well as the security of the global supply chain” said China’s commerce ministry. Over the weekend, US lawmakers reached a deal on a $900bn stimulus package. Meanwhile the UK went into an emergency lockdown and noted that a new strain of coronavirus is spreading rapidly. Powerlong Real Estate raised $100mn via a tap of their 5.95% 2025s at a yield of 5.69%. Cash Strapped Oman Targets Fiscal Deficit by Cutting Subsidies Battered by the effects of the pandemic and low oil prices, Oman has started a reform process to contain its fiscal deficit. NWD, Huaneng Launch $ Bonds; HKAA’s $1.5bn Perps 10x Covered; CS Upgraded to Baa1; Vedanta’s $ Bonds Inch Up – BondEvalue. S&P and Nasdaq closed 1.1% and 1.3% higher with DAX and CAC also higher by 0.7% and 1.1%. 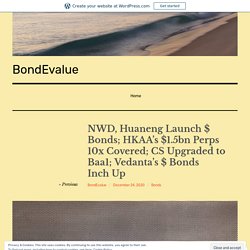 On the data front, China’s Caixin/Markit Manufacturing PMI surprised at 54.9 from October’s 53.6 while both the US and Germany’s ISM and PMI Manufacturing showed resilience at 57.5 and 57.8 respectively. Eurozone headline and core CPI dipped -0.3% MoM last month. Sentiment was also lifted with the unveiling of a $908bn US bipartisan congressional relief bill to support US small businesses, the unemployed and airlines. The announcement led the US 10Y and 30Y Us Treasury yields to rise 7bp and 9bp. In the UK, the government said that its telecoms operators will be banned from installing new 5G equipment made by Huawei after September 2021. High Yield Bonds Lead The July Recovery. July has been a month of recovery for the bond market, with $ 10.1 billion added to the market value of all US dollar bonds in the BEV universe. 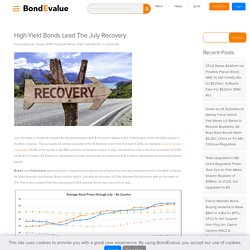 This accounts for almost a quarter of the $ 45 billion lost in the first half of 2018, as reported in our previous newsletter. 53.5% of the bonds in the BEV universe increased in price in July, compared to 3.6% in the first six months of 2018. Of the $ 10.1 billion, $ 7.9 billion is attributable to high yield bonds, as compared to $ 2.1 billion attributable to investment grade bonds. Brazil and Indonesia stood out when comparing average prices of bonds from the top countries of risk in the BEV universe. As seen from the chart below, Brazil led the rally in July with an increase of 3.9%, followed by Indonesia with an increase of 3%. This is also evident from the narrowing of CDS spreads for the two countries in July. 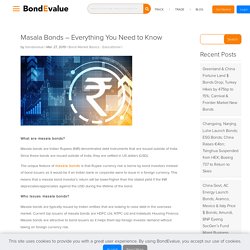 Masala bonds are Indian Rupees (INR) denominated debt instruments that are issued outside of India. Since these bonds are issued outside of India, they are settled in US dollars (USD). The unique feature of masala bonds is that Rupee currency risk is borne by bond investors instead of bond issuers as it would be if an Indian bank or corporate were to issue in a foreign currency.

This means that a masala bond investor’s return will be lower/higher than the stated yield if the INR depreciates/appreciates against the USD during the lifetime of the bond. Emerging Market Bonds - Increasing Interest in Indian & Indonesian Bonds. India and Indonesia have together captured almost one-fifth of emerging-market bond net inflows year-to-date through August, as investors continue to be lured by their rich yields and strong growth prospects when they were but a few years ago considered among the most vulnerable in the emerging markets. 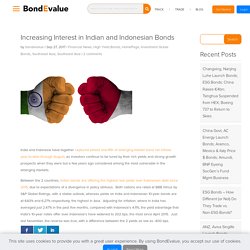 Between the 2 countries, Indian bonds are offering the highest real yields over Indonesian debt since 2015, due to expectations of a divergence in policy stimulus. Both nations are rated at BBB minus by S&P Global Ratings, with a stable outlook, whereas yields on India and Indonesian 10-year bonds are at 6.63% and 6.27% respectively, the highest in Asia. Adjusting for inflation, where in India has averaged just 2.47% in the past five months, compared with Indonesia’s 4.11%, the yield advantage that India’s 10-year notes offer over Indonesia’s have widened to 202 bps, the most since April 2015. 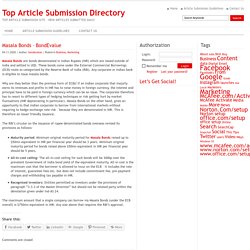 These bonds come under the External Commercial Borrowings (ECB) route as categorized by the Reserve Bank of India (RBI). Any corporate or Indian bank is eligible to issue masala bonds. Why are they better than the previous form of ECBs? If an Indian corporate that majorly earns its revenues and profits in INR has to raise money in foreign currency, the interest and principal have to be paid in foreign currency which can be an issue. BondEvalue: Hong Kong Bond Market - BondEvalue. Hong Kong’s bond market is one of the largest in Asia. 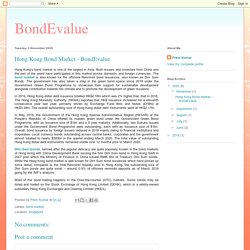 Both issuers and investors from China and the rest of the world have participated in this market across domestic and foreign currencies. The bond market is also known for the offshore Renminbi bond issuances, also known as Dim Sum Bonds. The government has also taken a step in the green bond space since 2018 under the Government Green Bond Programme to showcase their support for sustainable development alongside contribution towards the climate and to promote the development of green issuance. In 2019, Hong Kong dollar debt issuance totalled HK$4.18tn which was 2% higher than that in 2018. The Hong Kong Monetary Authority (HKMA) reported that HK$ issuance increased for a eleventh consecutive year last year, primarily driven by Exchange Fund Bills and Notes (EFBN) at HK$3.39tn.

All that you need to know before starting to trade bonds PowerPoint Presentation - ID:10169666. Download Skip this Video. 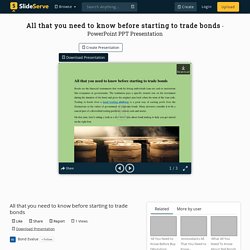 Taking a closer look at the bond markets in Hong Kong. Understanding bond yields meaning, metrics, and more. Everything you need to know before investing in a high-yield bond. High yield bonds, also known as junk bonds, are the bonds that offer high-interest rates as they come with lower credit ratings compared to investment-grade bonds. 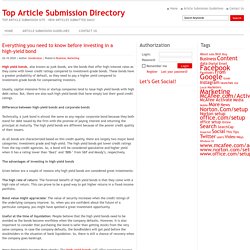 These bonds have a greater probability of default, so they need to pay a higher yield compared to investment-grade bonds for compensating investors. Usually, capital-intensive firms or startup companies tend to issue high yield bonds with high debt ratios. But, there are also such high yield bonds that have simply lost their good credit ratings. Difference between high-yield bonds and corporate bonds Technically, a junk bond is almost the same as any regular corporate bond because they both stand for debt issued by the firm with the promise of paying interest and returning the principal at maturity. Panda Bonds Issuance On Track to Outpace Dim Sum Market. Sales of Panda bonds, yuan-denominated debt issued in China by offshore companies, is set to outpace Hong Kong’s Dim Sum market in 2017, with first time issuers such as Hungary shifting to raise Renminbi bonds in China when previously it did so in Hong Kong.

Dim Sum issuance, vibrant in the early days, lost its attractiveness around 2015 with the depreciating trend in the Renminbi. Moves by overseas issuers towards accessing China rather than the Hong Kong market are additional signs that the latter’s role as an offshore yuan centre could be limited. Indeed, investors are of the opinion that the onshore market offers much more variety in terms of bond types and terms, not to say better liquidity. This is no doubt good news to the likes of Portugal, the Philippines and Belarus, who are amongst the group of sovereign issuers planning to tap the market. Investment Grade Bonds Archives - BondEvalue. Top Builders in South Delhi, NCR. New bond issues Process – Explained. One of the ways to invest in bonds is through the primary markets, by subscribing for new bond issues. Because the new issue process and related terms can be unfamiliar and intimidating for new bond investors, we aim to explain the overall new bond issue process and timeline in this blog post.

For most of the last two years there has been no public Dim Sum issuance, largely due to the negative medium- to long-term outlook on the renminbi, such that issuers would have to compensate investors through offering debt at higher yields. With the narrowing of the cross currency basis swap and improving sentiment on the positive direction of the renminbi, there are signs that this asset class is starting to enjoy attention from both issuers and investors again. Last week, Singapore-based A-/A- (Moody’s/S&P) rated aircraft leasing company, BOC Aviation, printed a Dim Sum issue of CNH 1 billion in 3-years at 4.5%. BMW, rated A1/A+ (Moody’s/Fitch), completed a similar deal around the same time at 4.25%.

Bank Of China 5.9% Perpetual - US06428YAA47 - Bond Price. Fractional Bonds. Trade Fractional Bonds on an Electronic Bond Exchange – BondbloX by BondEvalue. Blockchain Bond Trading. Credit Ratings, Investment Grade & High Yield Bonds. New bond issues Process – Explained. What to Look for When Buying Bonds. For an investor looking to buy bonds for the first time, navigating the bond market could be tricky because of the varied terms used to describe the characteristics of any given bond. Clearly understanding what to look for when buying bonds might help investors analyse bonds more effectively, in order for more informed investment decisions to be made. In this blog post, we will explain 5 key terms: Credit Rating, Coupon, Yield, Maturity and Duration. Let’s take the HSBC floating rate bond due 2024 as an example.

Maturity Date Maturity date refers to the date an investor can expect to receive the principal investment from the bond, subject to default risks. It is worth noting that for bonds with call options, redemption can take place well before the maturity date. Do note that for perpetual bonds on the BondEvalue App, maturity year is indicated as 2049. Credit Ratings Credit rating refers to the grading that indicates the creditworthiness of the bond issuer as well as that particular bond.