Why Are The Chinese Stockpiling Silver? Big Price Move Coming? By The SRSrocco Report It looks like something big may happen to the silver market and the Chinese are preparing for it. 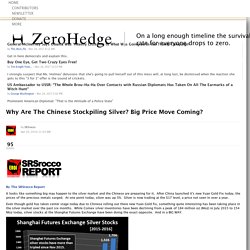 After China launched it's new Yuan Gold Fix today, the prices of the precious metals surged. At one point today, silver was up 5%. Silver is now trading at the $17 level, a price not seen in over a year. Understanding China’s Latest Solar Five-Year Plan – Paulson Institute. By Anders Hove China’s solar energy industry has registered astonishing growth, with 34 GW of new solar installed in 2016 alone, double the amount added in 2015 and more than double the new solar added in the United States. 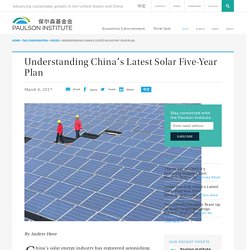 Renewable energy, including solar, is essential for meeting China’s energy and climate goals and reducing reliance on high-emissions coal, which contributes to both air pollution and climate change. China began promoting solar as part of a manufacturing strategy a decade ago, and in recent years has begun promoting widespread uptake of the technology. But the energy produced by solar still accounts for only a tiny share of China’s electricity—in part because of a focus on adding new capacity, as opposed to doing a better job of integrating the energy solar produces, such as through improving power sector operations or locating solar closer to where people live and work. Understanding China’s Latest Solar Five-Year Plan – Paulson Institute. Does Turkey's Erdogan expect more gain than pain from ditching EU? Turkey's President Recep Tayyip Erdogan delivers a speech during a rally against terrorism in Strasbourg, France, Oct. 4, 2015. 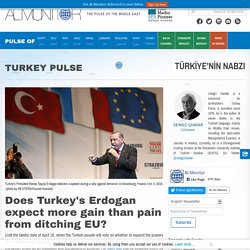 (photo by REUTERS/Vincent Kessler) Author: Cengiz Çandar Posted March 23, 2017 Until the fateful date of April 16, when the Turkish people will vote on whether to expand the powers of President Recep Tayyip Erdogan, there won’t be a single day that he refrains from slamming the European Union as an institution and Europeans in general. 403 Forbidden. Russia boosts gold production, concentrate exports 13% in 2013 (Part 2) News headlines February 11, 2014 12:24 MOSCOW. 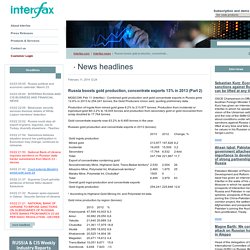 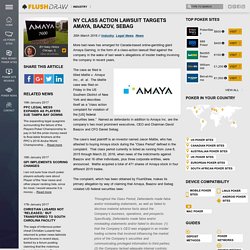 The case as filed is titled Mattie v. Amaya Inc., et. al. The Mattie case was filed on Friday in the US Southern District of New York and describes itself as a “class action complaint for violation of the [US] federal securities laws.” Named as defendants in addition to Amaya Inc. are the company’s two most prominent executives, CEO and Chairman David Baazov and CFO Daniel Sebag. Gold Exports by Country. Gold bar glitter Gold exports by country totaled US$297.1 billion in 2015, up by an average 31.8% for all gold-shipping countries over the five-year period starting in 2011 when gold shipments were valued at $225.5 billion. 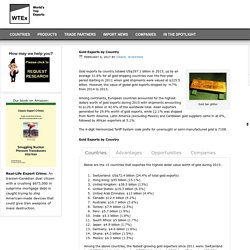 However, the value of global gold exports dropped by -4.7% from 2014 to 2015.Among continents, European countries accounted for the highest dollars worth of gold exports during 2015 with shipments amounting to $126.4 billion or 42.6% of the worldwide total. Asian exporters generated for 29.9% worth of gold exports, while 12.1% was shipped from North America. Latin America (excluding Mexico) and Caribbean gold suppliers came in at 6%, followed by African exporters at 5.1%.The 4-digit Harmonized Tariff System code prefix for unwrought or semi-manufactured gold is 7108.

9/11 Witness on Trump's Well-Intentioned but Mis-Guided Ban. Via Soren K and MarketSlant Upfront: I'm very liberal socially and have the CV to back that up. 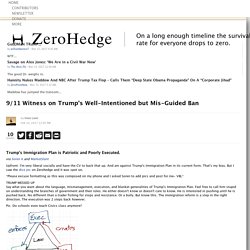 And am against Trump's Immigration Plan in its current form. That's my bias. But I saw the dice pic on Zerohedge and it was spot on. *Please excuse formatting as this was composed on my phone and I asked Soren to add pics and post for me- VBL* China's solar power capacity more than doubles in 2016. A Walkthrough of Silver Abuse from the 1990's Until Now. Summary Submitted by Vince Lanci and MarketSlant. 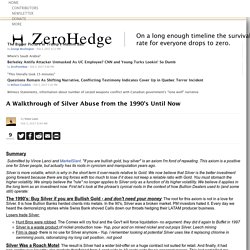 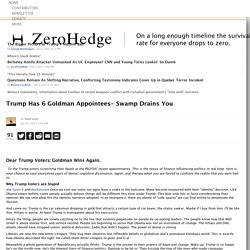 To the Trump voters scratching their heads at the PEOTUS' recent appointments. This is the nexus of finance influencing politics in real time. Here is your chance to save yourselves years of denial, cognitive dissonance, regret, and therapy when you are forced to confront the reality that you were lied to. Why Trump Voters are Stupid Via Soren K and Marketslant Once we cast our votes our egos have a stake in the outcome. America's Supposed "Enemies" Are Literally Disappearing...But They Won't Likely Gently Fade Away. Submitted by Chris Hamilton via Econimica blog, China, Russia, and Iran seem to be the most frequently mentioned state level "enemies" of America (not my view but that of the federal government). 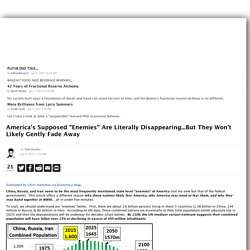 This article offers a different reason why these nations likely fear America, why America may need to fear them, and why they may band together in WWIII... all in under five minutes. Central Bank Gold Policies - People's Bank of China - Gold University - BullionStar. Introduction Through it’s central bank, the People’s Republic of China holds the world’s 6th largest central bank gold holdings, with over 1800 tonnes of gold held in its official reserves of the People’s Bank of China.

These gold reserves holdings are notable for having quadrupled since the early 2000s amid much secrecy. Since mid 2015, however, the Chinese government has embarked on a revised communication policy of releasing monthly updates on the size of its gold holdings. Although there is no official confirmation of gold storage arrangements, it is thought that the Chinese official gold reserves are vaulted in Beijing, China’s capital, and may be under the protection of the Chinese army.

China’s central bank, the People’s bank of China (PBoC), holds and manages China’s official monetary gold reserves. Singapore GDP Surges Over 9% In Q4 - Most Since 2012. Following Q3's 2% contraction, and with analysts' highest expectation at +5.1% (StanChart), Singapore GDP grew at a shocking 9.1% in Q4 QoQ. This is the biggest QoQ growth since Q1 2012... This was four standard deviations above average estimates. These are preliminary numbers based on the first two minths of the quarter but the rebound was seemingly based on China's exuberance... Manufacturing +14.6% q/q;Services +9.4% q/q. A New Balance Of Power In The Gold Market. With precious metals soaring on safe haven buying... We thought John Rubino's thoughts (via DollarCollapse.com) were particularly prescient... Gold analyst Michael Ballanger just posted an article noting how much things have changed — perhaps for the better — in the gold market. Here’s an excerpt: China’s Gold Market Opens Up To Boost RMB Internationalization.

Last week the Shanghai Gold Exchange (SGE) launched a new English website to offer international customers more information and tools on trading gold in renminbi through its subsidiary in the Shanghai Free Trade Zone the Shanghai International Gold Exchange (SGEI). BullionStar took the opportunity to translate a speech by a Teng Wei, Deputy General Manager of the SGEI, named “How China’s Gold Market Can Help The RMB Achieve International Status” that was held at the Renminbi World summit in Beijing on the 29th and 30th of November 2016.

In the speech Teng Wei outlined his vision for the SGEI going forward regarding renmibi (RMB) internationalization, connecting the onshore and offshore renminbi market and increasing gold market share. My comment before you read the translation: Chart(s) Of The Week: 'Lombard Street' For A New Age. Submitted by Jeffrey Snider via Alhambra Investment Partners, At one point in time not all that long ago, basic economics (small “e”) ruled central banking. There was really no other choice, as out of necessity bred change and understanding. The English were perhaps first in that lead, as the Empire with greatest economic and financial reach. $80M GOLD BARS WITH GHANA SEAL; MORE QUESTIONS THAN ANSWERS. $45m gold deal: The inside story. Turkey Crisis Puts Jailed Millionaire at Heart of Gold Trail - Bloomberg.

Asia's Gold Investing Support Goes AWOL: China. Dear Gold Bugs, Grow Up: The 1970's are Back. TRUMP, DEBT COLLAPSE, & GOLD: Is The End Near? Singapore a safe haven for gold investors, Singapore News. What's the catch with this gold plan? - The Daily Reckoning - UK Edition. Why is Turkey Turning to Gold? India Confiscates Gold, Even Jewelry, In Raids On Hidden Money.