DRM be damned: How to protect your Amazon e-books from being deleted. If you buy e-books from Amazon and want to engage in a bit of digital civil disobedience—by stripping the files’ DRM and making sure that Amazon can’t deny you access—we’re about to show you how. 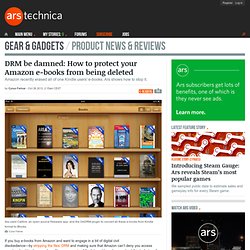 Yes, many parts of the Internet have known about this technique for some time now, but we feel that it bears mentioning again here. Over the past week, the tech world has been abuzz with news that—surprise, surprise—Amazon can remotely wipe any Kindle, at any time, for effectively any reason. (The company did it before, ironically, with George Orwell’s 1984, back in 2009.) This week’s case involves a Norwegian woman (Google Translate) named Linn Nygaard. She bought a Kindle in the United Kingdom, took it home to Norway, and bought UK e-books on the Kindle. "I have not heard anything from Amazon about this, except that I got a very strange phone [call] earlier from someone with a hidden number," Nygaard told Norwegian broadcaster NRK. All our datasets: the complete index. 14 Free Product Key Finder Programs. 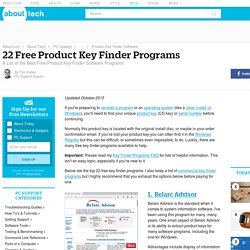 Belarc Advisor Belarc Advisor is the standard when it comes to system information software. I've been using this program for many, many years. One small aspect of Belarc Advisor is its ability to extract product keys for many software programs, including the one for Windows. Advantages include display of information in your browser window, no adware/toolbars to worry about, and an extensive list of other important computer data.

Lock down your privacy. Get Out of Debt Fast with ReadyForZero. Tech for those over 40, but not over the hill. Faster Than an SSD: How to Turn Extra Memory Into a RAM Disk. Whether you have a hard drive or an SSD, your computer’s RAM is its fastest storage medium by a wide margin. 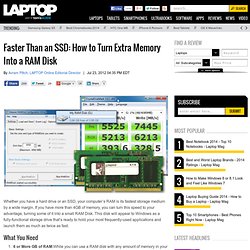 If you have more than 4GB of memory, you can turn this speed to your advantage, turning some of it into a small RAM Disk. This disk will appear to Windows as a fully-functional storage drive that’s ready to hold your most frequently-used applications and launch them as much as twice as fast. What You Need 6 or More GB of RAM:While you can use a RAM disk with any amount of memory in your system, we don’t recommend that you create one if you have 4GB or less. Whatever amount of memory you assign to the disk will be unavailable to the OS and, since 4GB is the minimum standard these days, you really need 6GB or more to have both a RAM disk and a reasonable amount of system memory available.Fortunately, if your computer takes DDR3 RAM — the standard type for more then 4 years — upgrading will be very inexpensive. Setting Up Your RAM Disk Install DataRAM RAMDisk. Recommended by. LAPTOP Magazine - Product reviews, tech news, buying guides, and more.

14” Thin + Light. Tech Specs * The HDD capacity on VIZIO computers may appear to be smaller than the size stated in the product specifications, documentation or on the packaging. 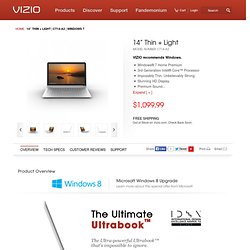 This is because manufacturers describe and advertise HDD space in terms of decimal capacity, a base of powers of 10. For example, one Gigabyte (GB) means 109 = 1,000,000,000 bytes. However, Microsoft® Windows and other operating systems and programs report storage capacity using powers of two. Thus, 1 GB = 230 = 1,073,741,824 bytes, and shows less storage space. ** Battery life ratings are for comparison purposes only, and do not indicate the battery life that will be obtained by any individual user.

VIZIO, Inc. has made every effort to ensure the accuracy of the information provided herein. How to Organize Evernote for Maximum Efficiency. Please note: The way I organize Evernote today is completely different than what I wrote here. 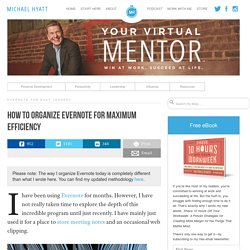 You can find my updated methodology here. I have been using Evernote for months. However, I have not really taken time to explore the depth of this incredible program until just recently. I have mainly just used it for a place to store meeting notes and an occasional web clipping. Photo courtesy of ©iStockphoto.com/STEVECOLEccs However, thanks to Brett Kelly’s very helpful e-book, Evernote Essentials, the Evernote user forum, and a little experimentation, I have begun to see the incredible power of this digital repository. It all begins by establishing a solid organizational structure. If you are just getting started with Evernote, I suggest that you buy Brett Kelly’s remarkably practical e-book, Evernote Essentials, 4.0. Bananatag. Effortlessly Track Team Progress via E-mail.