Rape and Sexual Assault Statistics, Canadian Gov. A Numerical Representation of the Truth.

People with Disabilities and Sexual Assault. Brief Synopsis: People who experience forms of disabilities may face limited options where escaping from abusive relationship is concerned. 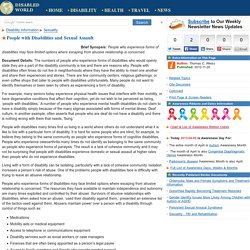 Document Details: The numbers of people who experience forms of disabilities who would openly state they are a part of the disability community is low and there are reasons why. People with disabilities often times do not live in neighborhoods where they have the ability to meet one another and share their experiences and stories. There are few community centers, religious gatherings, or even coffee shops that cater to people with disabilities unfortunately. Many people do not want to identify themselves or been seen by others as experiencing a form of disability. Sexual assault report 2014 US Gov. Repeat Rape in Undetected Rapists. Twitter conversation about unreported rape goes global. It started out as a Facebook conversation on Thursday between two good friends in two different Canadian cities, sharing their frustration with the act of blaming victims of rape in general and the attacks on the alleged victims of Jian Ghomeshi in particular. 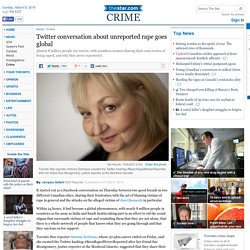 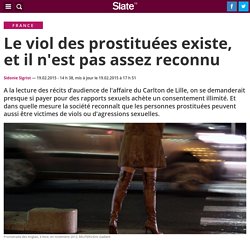 Whether the case is instantiated at the provincial or federal level; the judicial decisions reflect the values of society, regardless of the assumed impartiality of the judge. The judge is not the only actor who plays a pivotal role in upholding the status quo; the police (especially the RCMP) are complicit in reproducing violence against women and girls. Rehtaeh Parsons is just one woman who did not receive an adequate police response; she was raped while boys (now men) produced pornographic images of her, she was intoxicated to the point of vomiting profusely at the time.

The boys circulated the pornographic images of her rape, yet the police and the court decided that there was “insufficient” evidence to lay sexual assault charges. A woman cannot consent when she is drunk. Such as with images of women in pornography, there is a belief that the sexual nature of women (and girls) is licentious.

Believing men is not “a feminist imperative” Recently, actor Shia LaBeouf claimed that he was “raped” while performing in an art installation. 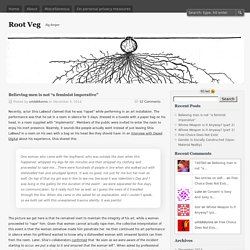 The performance was that he sat in a room in silence for 5 days, dressed in a tuxedo with a paper bag on his head, in a room supplied with “implements”. Members of the public were invited to enter the room to enjoy his inert presence. Bizarrely, it sounds like people actually went instead of just leaving Shia LaBeouf in a room on his own with a bag on his head like they should have. In an interview with Dazed Digital about his experience, Shia shared this: One woman who came with her boyfriend, who was outside the door when this happened, whipped my legs for ten minutes and then stripped my clothing and proceeded to rape me… There were hundreds of people in line when she walked out with dishevelled hair and smudged lipstick.

The picture we get here is that he remained inert to maintain the integrity of his art, while a woman proceeded to “rape” him. From Shia LaBeouf to Rolling Stone's frat house story, the trouble with "I Believe Her" The first line in the feminist battle against male violence isn’t always “I believe her”. 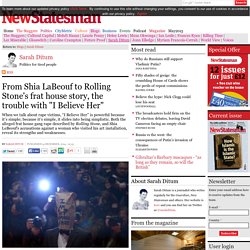 Sometimes, she is not to be believed. Why are we supposed to believe Shia LaBeouf? I don’t have any particular opinion on Shia LaBeouf. 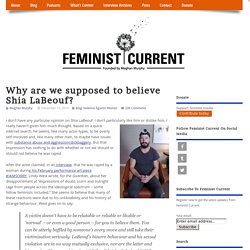 I don’t particularly like him or dislike him. I really haven’t given him much thought. Based on a quick internet search, he seems, like many actor-types, to be overly self-involved and, like many other men, to maybe have issues with substance abuse and aggression/dickbaggery. But that impression has nothing to do with whether or not we should or should not believe he was raped. After the actor claimed, in an interview, that he was raped by a woman during his February performance art piece #IAMSORRY, Lindy West wrote, for the Guardian, about her disappointment at “expressions of doubt, scorn and outright rage from people across the ideological spectrum – some fellow feminists included.” Statistiques agressions sexuelles québec. «75.000 viols par an»: comment sait-on combien de femmes sont victimes de viol en France?

Les plaintes enregistrées par la police ne suffisent pas et même les enquêtes de victimation ne disent pas toute la vérité de l'ampleur du phénomène. Making rape expensive: Why this campus assault bill is a model for cracking down everywhere. The 114th Congress promises to be a total disaster, but the Campus Accountability and Safety Act might be the rare proposal to receive bipartisan consensus in the new session. Among its other provisions, the bill would level harsher penalties against colleges and universities that fail to address sexual violence on campus. “We’re looking at a variety of things, including larger fines,” Missouri Sen. Claire McCaskill said last year. “I feel very strongly that fines would need to be based on the size of the institution.”

Gregory Warner/NPR Tina Amissi grew up in a small village in the Democratic Republic of Congo with 26 brothers and sisters. Amissi's father supported her dream to go to medical school in the city of Bukavu. "My father said, 'You'll leave your mother? ' When the classwork got too hard and Amissi wanted to drop out of medical school, it was her father who walked hundreds of miles from his village to her dorm room just to give her a critical pep talk. Study finds a third of college men would rape if they could get away with it. In a small but disturbing survey conducted at the University of North Dakota, nearly a third of male college students said they would commit rape if they could get away with it — and if it wasn’t described as “rape.” ThinkProgress reports: According to the survey, which analyzed responses from 73 men attending the same college, 31.7 percent of participants said they would act on “intentions to force a woman to sexual intercourse” if they were confident they could get away with it.

When asked whether they would act on “intentions to rape a woman” with the same assurances they wouldn’t face consequences, just 13.6 percent of participants agreed. The study also looked at the men’s general attitudes towards women and found that, unsurprisingly, those who were willing to rape a woman were blatantly misogynistic, displaying open hostility and resentment for women. It is ‘all men': Our culture of predatory misogyny. You know how they are telling you that it is “not all men?” That men like Jian Ghomeshi are a terrible exception and if we as men simply stand up and say we are not as bad as that, or that we are not rapists or do not beat “our” girlfriends or that we show that it is not men, generally, who are violent and abusive, but only “bad” men?

Well that is bullshit. It is all men. We, collectively, and most commonly as individuals, are responsible for creating the conditions that not only facilitate Ghomeshi, but that ensure he will exist. This is a very uncomfortable and inconvenient truth. Agression sexuelle : comment réagir. Connaissez-vous le numéro des urgences ? Comme ça, sans chercher sur Google ? Et maintenant : est-ce que vous vous en souviendriez en état de choc ?