Visualizing Mathematics with 3D Printing. Imprimantes 3D - 3D Modular Systems. Fan Art: 3D Printed Doctor Who Cyberman Helmet. Hey All,I wanted to post images of a personal project I have been working on for my son and me for Halloween. 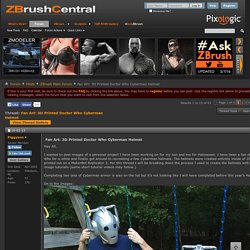 I have been a fan of Doctor Who for a while and finally got around to recreating a few Cyberman helmets. The helmets were created entirely inside of ZBrush and printed out on a MakerBot Replicator 2. For this thread I will be breaking down the process I used to create the helmets with simple image tutorials (some short tutorial videos may follow.)Completing two sets of Cyberman armor is also on the list but it's not looking like I will have completed before this year's Halloween :)On to the Images: Click here to view the original image of 1079x609px. Click here to view the original image of 1041x767px. Then had some fun at the ZBrush Summit with one of the Helmets :) ("Louie Tucci as the Doctor" - Joe Menna) Was honored by Rick Baker posing for a photo! 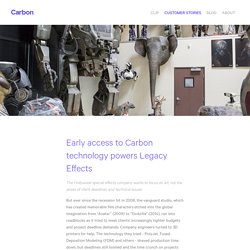 Lead Systems Engineer Jason Lopes encountered Carbon’s CLIP technology at the Additive Manufacturing Users Group (AMUG) conference: “Right away I was attracted because of the quality of the parts they were showing me, and the speed at which they were able to produce parts with final-part mechanical properties” says Lopes. Carbon offered Lopes a chance to take a prototype back to his studio and join their early access program. He was skeptical at first. “In this industry, you want to believe everything you hear, but you have to pull back and ask more questions,” he says. The Carbon team’s commitment to understanding a customer’s problems and aiding them in finding solutions meant they took time to listen to Lopes’ industry-specific needs, understand his workflow and support him to customize his experience. 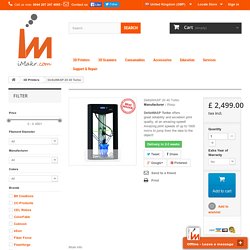 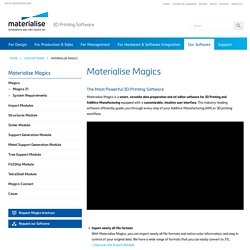 This industry-leading software efficiently guides you through every step of your Additive Manufacturing (AM) or 3D printing workflow: Import nearly all file formats With Materialise Magics, you can import nearly all file formats and native color information, and stay in control of your original data. We have a wide range of formats that you can easily convert to STL. > Discover the Import Module Repair and prepare files The STL file editor software in Magics allows you to correct problems, as well as create watertight data and shortcuts to suit your AM workflow, all in a user-friendly interface. Proko. Full Access to Figure Drawing Videos - miss new tutorials, signup for my mailing list - Let's get into shading a drawing! 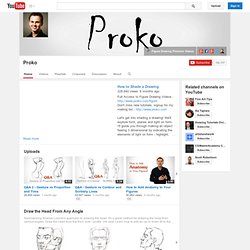 We'll explore form, planes and light on form. I'll guide you through making an object feeling 3 dimensional by indicating the elements of light on form - highlight, center light, halftones, core shadow, reflected light, cast shadow and occlusion shadow. How the local value of the object effects the tones. And how does intensity of light affect tones. In this Premium Lesson I describe my complete process of drawing a figure, step by step. Comparatif d'imprimantes 3D. Deep In The Heart Art Foundry - Tour The Foundry. Enlargements The start to a monument often begins with the digital enlargement of a maquette (or small version of the monument). 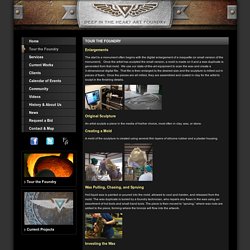 Once the artist has sculpted the small version, a mold is made on it and a wax duplicate is generated from that mold. We use our state-of-the-art equipment to scan the wax and create a 3-dimensional digital file. That file is then enlarged to the desired size and the sculpture is milled out in pieces of foam. Once the pieces are all milled, they are assembled and coated in clay for the artist to sculpt in the finishing details. Original Sculpture An artist sculpts a piece in the media of his/her choice, most often in clay, wax, or stone. The Beast - A Large and Precise, 4x Extruder 3D Printer by cultivate3d. The Beast's enormous build area allows users to print objects that have never before been possible on a printer with such a low price point. 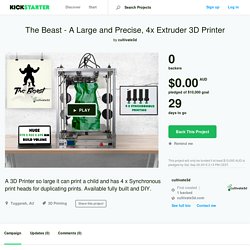 Our hope is for "The Beast" to make many previously unattainable projects and prints possible and to make it accessible to as many makers, inventors, DIY enthusiasts and artists as we can. The Beast's ability to simultaneously print 4 identical objects or groups of objects will enable small scale manufacturing capabilities at a fraction of the cost of 4 individual 3D printers.

The Beast effectively cuts print times by 4 when printing simultaneously. 4x Synchronous printing combined with a high speed rail system and Bowden extruders means "The Beast" is capable of producing prints upwards of 10x faster than other FDM (filament type) 3D printers. The speed of printing can be increased even more by changing to a larger nozzle. 4x Printing also enables the user to print 4 of the same object/s at the same time with different colours or materials.

LumiPocket LT: More than a 3D Printer, a Personal Fabricator by Lumi Industries. Risks and challenges From our last experience with Lumipocket, our last campaign, we have finally defined a group of reliable suppliers who already know what what we need and when we want it. 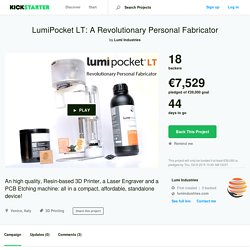 Moreover, most parts have already been produced with success and needs only to be replicated, so that all our attention can be put on the UV laser module, so on half of the components. Assembling and testing it is another critical moment, and testing is never enough. You need to be completely sure that what goes out from your warehouse is a perfectly working device without any defect. Then, for sure, for Murphy’s law, something will always go wrong or delay will be there, but we feel that we have enough experience now on managing unexpected troubles and solving problems in the best way and in the fastest time. Now the major risks are due to a more complex product, and the use of laser, even if low power, in this machine will make the certification process more difficult, and we are aware of this. 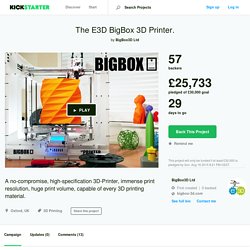 We know what we're doing. We're constantly testing nearly all the big name printers out there, and have built over 15 different RepRap designs. We're insatiable, and we wanted a machine that had it all: huge print volume; high quality prints; every material: all the fun features and all the convenient extras. That machine just didn't exist, so we had to create yet another 3D printer Kickstarter (!). So here it is. The most striking feature of BigBox is an absurdly huge build volume. Objects built in the plane of the bed are stronger than tall objects built away from the bed so this is a real practical advantage.

Full Spectrum Laser. RetinaCreate™ is ideal for beginners and 3D Printing experts alike, with a best in class automatic support algorithm to get you printing fast. 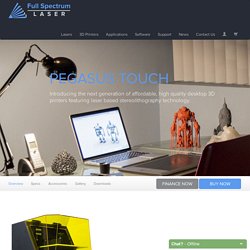 3D Printing: Are You Ready for the New Decentralized Industrial Revolution? The world around us has advanced so much that science fiction is no more a fiction. Thirty-Five Percent of Engineering Jobs Now Require 3-D Printing Skills - 3DDE Conference. The technology behind 3-D printing is progressing rapidly, with companies around the world investing billions of dollars into R&D to improve hardware, software, and printable plastics and other materials.

Meanwhile, the use of 3-D printing has gone mainstream. As a result, knowing how to use a 3-D printer has become an in-demand job skill. A recent report from data company Wanted Analytics found that in one month 35 percent of engineering job listings from a variety of fields, including biomedical, software, and transportation industries, required applicants familiar with 3-D printing and its additive manufacturing processes. The same report found that companies are having a difficult time finding candidates with the right skills. “The entire field is diverging, branching, and evolving as fast as any evolutionary technology you can possibly imagine,” says IEEE Associate Member Terry S. Source: TheIndustry.com. 3D Printing: Are You Ready for the New Decentralized Industrial Revolution? Hardware Designs Should Be Free. Here's How to Do It. We must design free hardware.

But the question remains: how? First, we must understand why we can’t make hardware free the same way we make software free. Hardware and software are fundamentally different. A program, even in compiled executable form, is a collection of data which can be interpreted as instruction for a computer. Like any other digital work, it can be copied and changed using a computer. Dr. Hardware Designs Should Be Free. Here's How to Do It. Bill to Ban Undetectable 3D Printed Guns Is Coming Back. Since Congressman Steve Israel first called for legislation that would ban 3-D printed guns, those plastic-printed firearms have evolved from a few simple components to a full one-shot pistol to rifles and multi-shot revolvers, with more advances on the horizon. Israel’s bill, meanwhile, has gone nowhere, leaving a widening gap between DIY weapons and the law.

But the representative from New York says he hasn’t given up: In the next few months, Israel’s office tells WIRED he plans to reintroduce legislation that would ban 3-D printed guns or any other fully-plastic firearm. The Undetectable Firearms Modernization Act, which Israel first tried and failed to pass last year, forbids the possession or manufacture of any gun that could slip through a standard metal detector unnoticed, including those that include a removable chunk of non-functional metal—what he sees as a loophole in the current law against plastic weapons. The NRA, not surprisingly, isn’t so supportive.

Stalactite. Specialist Dental Treatment and Implants in Wimpole Street London. This 3D-Printed Exoskeleton Could One Day Turn You Into a Cyborg.