How to Read an Astrology Chart. Remember, the interpretations for each aspect, house placement and sign a planet is in is taken alone. 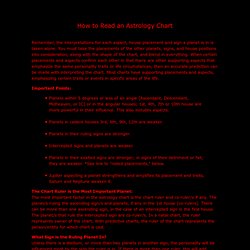 You must take the placements of the other planets, signs, and house positions into consideration, along with the shape of the chart, and blend in everything. When certain placements and aspects confirm each other in that there are other supporting aspects that emphasize the same personality traits or life circumstances, then an accurate prediction can be made with interpreting the chart. Most charts have supporting placements and aspects, emphasizing certain traits or events in specific areas of the life. What is the Vertex? « Alice Portman, Astrologer. Tamsoft.co.in/articles.html. Vertex in the Signs and in Aspect. Vertex in Aries You are expected to pick up the reins of leadership, initiate new directions, take a decisive stand, overcome inhibitions to activate personal drive, learn courage, and conquer fears. 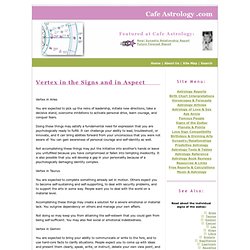 Doing these things may satisfy a fundamental need for expression that you are psychologically ready to fulfill. It can challenge your ability to lead, troubleshoot, or innovate, and it can bring abilities forward from your unconscious that you were not aware of. You can gain awareness of personal courage and self-identity as well. Not accomplishing these things may put the initiative into another’s hands or leave you unfulfilled because you have compromised or fallen into tempting mediocrity. 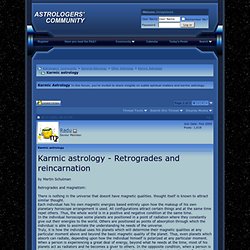 Each individual has his own magnetic energies based entirely upon how the makeup of his own planetary horoscope arrangement is used. All configurations attract certain things and at the same time repel others. Firstly, he is at any given time going through part of a threefold Retrograde Process. When the individual is in Phase 1 (jumping ahead of himself into trying to live the future now) it is nearly impossible for him to employ the retrograde negatively, fore he is trying to use all his energy for the propulsion of forward motion. The Asteroids in Astrology with Cathy Burroughs Part III: Vesta. In the last installment, we explored the meanings of the asteroids by sign, house and conjunction in a particular individual's chart (2/15/54; Newton, MA; 2:18 pm). 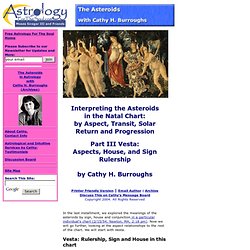 Now we will go further, looking at the aspect relationships to the rest of the chart. We will start with Vesta. Vesta: Rulership, Sign and House in this chart. Introduction To Vesta In The Natal Chart. The asteroid Vesta is associated with the mythology of the ancient Vestal Virgins and both Scorpio and Virgo. 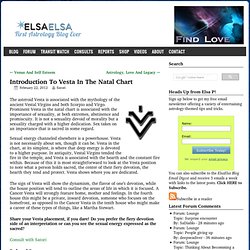 Prominent Vesta in the natal chart is associated with the importance of sexuality, at both extremes, abstinence and promiscuity. It is not a sexuality devoid of morality but a sexuality charged with a higher dedication. Sex takes on an importance that is sacred in some regard. Sexual energy channeled elsewhere is a powerhouse. Aspects to the Nodes - Moon's Nodes in Astrology. A friend shared these w me today CONJUNCTIONS TO S. 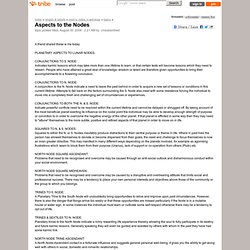 NODE: Indicates karmic lessons which may take more than one lifetime to learn, or that certain tests will become lessons which they need to relearn. People who have attained a great deal of knowledge, wisdom or talent are therefore given opportunities to bring their accomplishments to a flowering conclusion. Aspects 101: Major Astrological Aspects and What They Mean. ©1-13-2011 by Donna Cunningham, MSW Since some of our readers are relative newcomers to astrology, I like to include an occasional article that covers the basics. 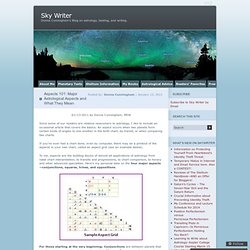 An aspect occurs when two planets form certain kinds of angles to one another in the birth chart, by transit, or when comparing two charts. If you’ve ever had a chart done, even by computer, there may be a printout of the aspects in your own chart, called an aspect grid (see an example below). The Galaxy Express. Eros in your partner's houses. Posted March 04, 2009 03:45 AM The girl usually feels the guy's Sun, Mars, Eros and Lust.The guy usually feels the girl's Sun, Moon, Venus, Psyche. 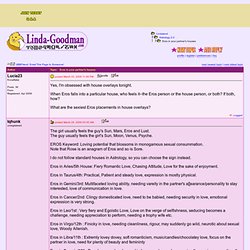 EROS Keyword: Loving potential that blossoms in monogamous sexual consummation.Note that Rose is an anagram of Eros and so is Sore. I do not follow standard houses in Astrology, so you can choose the sign instead. Eros & Psyche. She wants to hear: I want you. 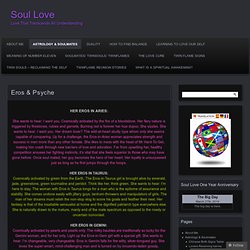 Cosmically activated by the fire of a bloodstone. Her fiery nature is triggered by firestones, rubies and garnets. Burning red is forever her hue dujour, She sizzles. She wants to hear: I want you. Vertex conjunct South Node. "But the angles conjunction don't "energize" the points like a planets will in a conjuction, they just give information. 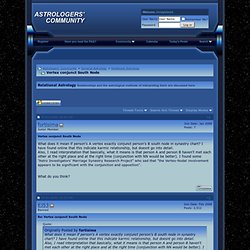 In this case the South Lunar Node as the marker of past lives is touching the personal, fated hotspot. Think of it as a scheduled rendezvous between soulmates (of one variety or another) as per a pre-incarnation soul agreement to meet in this lifetime in order to resolve karma together. " Destiny's Gate - the Vertex in Astrology. (Originally written and posted in 1996, but significant revision and expansion of content March 11, 2009) So you're hungry for a little info regarding the ever illusive astrological Vertex and its interpretation? Well... you've come to (or rather stumbled into) the right place! It would seem there's not much good, solid info that's ever been written about the Vertex...

AN IN DEPTH STUDY OF SAPPHO [ 80 ] Sappho signifies aesthetic refinement; the desire to bond deeply with or feel the same way as others. education of females in the fine arts; emotional extremes in love; friendship needs; poetic ability; romantic and artistic sensitivity; same-sex bonding that exceeds ordinary friendship; the sensitisation of individuals to their sexuality; sensuality; the sharing of aesthetics, artistry, interests and values; and sociability. Inharmonious aspects to Sappho indicate difficulties in forming close friendships; loneliness; problems in expressing or understanding love and sexuality; and trouble in balancing of intimacy needs with other areas of the personality. Sappho's natal sign placement shows what the individual does for or with close friends; while its natal house placement shows what he or she most needs to share. Synastry: sexual attraction. 1. Magnetic Attraction – (You’re a Magnet for me, baby…) Look for person A’s birth planets sign conjuncting the angles of person B’s chart (Ascendant/ Descendant magnetic axis or the Midheaven/ I.C. gravity axis).

This is especially true of person A’s luminaries and personal planets (Sun, Moon, Venus, and Mars) and especially true of conjuncting person B’s Ascendant/Descendant magnetic axis. Chiron Signs in the Birth Chart. Choose your Chiron Sign from the menu below or scroll down the page. Aries Chiron Sign Chiron in Aries affects the sense of self.

They may find themselves on a voyage of self-discovery or need to overcome feelings of worthlessness when Chiron is placed here. Chiron deals with healing, so they may need to discover ways of healing themselves. This sign is associated with headaches, head wounds and other injuries in this area. Return. Retrograde planets and their meanings. Natal Jupiter Retrograde * has doubts about what they deserve and so ... * finds it easy to settle for crumbs * feels superior in some way inside * abundance is felt on the inside * looks inside for answers to religious questions. Chiron in synastry ~ Molly's Astrology ~ Molly's Astrology Blog. A while back, Anya asked: Synastry - Jupiter Conjunct Vesta.