A Guide To Languages Spoken In South Africa. Ndebele Village in Mpumalanga, South Africa © South African Tourism/Flickr Add travel ideas to a Plan and see them on a map Got it! 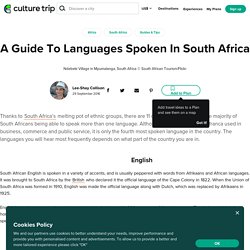 Thanks to South Africa’s melting pot of ethnic groups, there are 11 official languages, with the majority of South Africans being able to speak more than one language. Although English is the lingua franca used in business, commerce and public service, it is only the fourth most spoken language in the country. The languages you will hear most frequently depends on what part of the country you are in. English South African English is spoken in a variety of accents, and is usually peppered with words from Afrikaans and African languages.

English is taught as a compulsory language in schools, along with Afrikaans or an African language. Cape Town City Hall © Martie Swart/Flickr Afrikaans Afrikaans is a West Germanic language that evolved from Dutch, spoken by 17th-century colonizers in the Cape. Nguni Languages Sotho-Tswana Languages Xitsonga. KS2 History - BBC Bitesize. Save the Rhino International. The current rhino poaching crisis began in 2008, with increasing numbers of rhino killed for their horn throughout Africa until 2015. 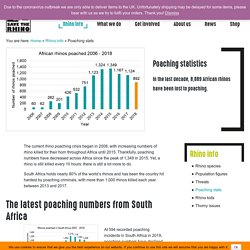 In February 2020 the South African Department of Environment, Forestry and Fisheries, released the 2019 poaching numbers. Unfortunately, this positive – and very welcome – decrease does not mean rhinos are now thriving. Page not found. Rhinoceros {Diceros bicornis} The rhinoceros is a large, primitive looking mammal that dates from the Miocene era millions of years ago. 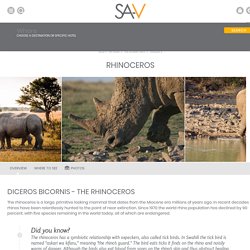 In recent decades rhinos have been relentlessly hunted to the point of near extinction. Since 1970 the world rhino population has declined by 90 percent, with five species remaining in the world today, all of which are endangered. Did you know? The rhinoceros has a symbiotic relationship with oxpeckers, also called tick birds. In Swahili the tick bird is named "askari wa kifaru," meaning "the rhino's guard. " The white or square-lipped rhino is one of two rhino species in Africa. Name Black Rhinoceros - Diceros bicornis White Rhinoceros - Ceratotherium simum Interesting Fact The White Rhino: The white rhino's name derives from the Dutch "weit," meaning wide, a reference to its wide, square muzzle adapted for grazing.

Did you know? The Black Rhino: The black, or hooked-lipped rhino, along with all other rhino species, is an odd-toed ungulate (three toes on each foot). Size Weight Habitat. Sport In South Africa. Lively soccer fans with a Vuvuzela and homemade guitar South Africa is a sports crazy nation – it’s practically a religion, the most popular spectator sports being soccer, rugby and cricket. 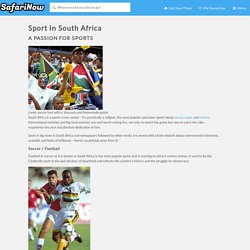 The Proteas are a very successful team, ranking in the Top Five for Test and Limited Over cricket world team rankings. South African Cricket has come a long way since the dark days of pre-democratic South Africa. The team has grown in both talent and strength and now boasts well distributed makeup of black as well as white player. Unfortunately the Proteas has not yet been able to win the coveted Cricket World Cup yet, but, as any supporter will tell you: "Just wait for next time! " My South African Adventure!! #WhatIReallyReallyWant... Nkosi Sikelel' iAfrika (south african national anthem, with lyrics) - Inno nazionale sudafricano.