To celebrate Vim's anniversary, creator Bram Moolenaar recently dropped version 8.0. Ordinarily the update of a text editor wouldn't be worth mentioning, but this is the first major Vim release in ten years. In today's world, where web browsers drop major point updates (what they consider major, anyway) several times a year, Vim's lack of major updates is not just refreshing, but speaks of an entirely different approach to developing software. Even leaving aside the absurd version system of today's web browsers, eight releases in 25 years would be considered slow by today's software development standards. Interestingly, though, Vim's biggest rival, GNU Emacs, has a roughly similar development pace. Yet Vim and Emacs taken together may well be the most used software in the software developer's toolkit. What is a web developer? Page last changed today Last week I was the target of a good old-fashioned internet witch hunt when I dared to propose that you should be able to work without tools (frameworks, libraries, and so on) in order to be a web developer. 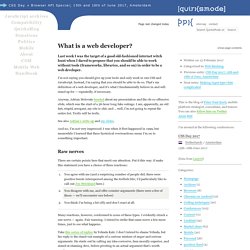 I’m not saying you should give up your tools and only work in raw CSS and JavaScript. Instead, I’m saying that you should be able to do so. That’s my definition of a web developer, and it’s what I fundamentally believe in and will stand up for — repeatedly, if necessary. Anyway, Adrian Holovaty tweeted about my presentation and the oh-so offensive slide, which was the start of a 36-hour long fake outrage.

See also Adrian’s write-up and my slides. And no, I’m not very impressed. There are certain points here that merit our attention. You agree with me (and a surprising number of people did; there were positive tweets interspersed among the trollish bile; I’d particularly like to call out Jen Strickland here.) Take this series of replies by Yehuda Katz. A Programmer’s Introduction to Unicode – Nathan Reed’s coding blog. Ｕｎｉｃｏｄｅ! 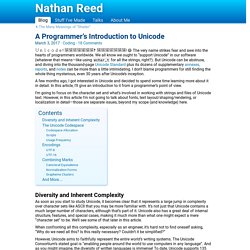 🅤🅝🅘🅒🅞🅓🅔‽ 🇺‌🇳‌🇮‌🇨‌🇴‌🇩‌🇪! 😄 The very name strikes fear and awe into the hearts of programmers worldwide. We all know we ought to “support Unicode” in our software (whatever that means—like using wchar_t for all the strings, right?). But Unicode can be abstruse, and diving into the thousand-page Unicode Standard plus its dozens of supplementary annexes, reports, and notes can be more than a little intimidating.

I don’t blame programmers for still finding the whole thing mysterious, even 30 years after Unicode’s inception. A few months ago, I got interested in Unicode and decided to spend some time learning more about it in detail. I’m going to focus on the character set and what’s involved in working with strings and files of Unicode text. Design Patterns. In software engineering, a design pattern is a general repeatable solution to a commonly occurring problem in software design. 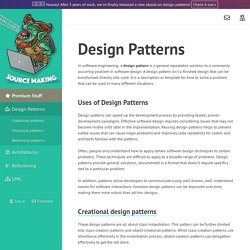 A design pattern isn't a finished design that can be transformed directly into code. It is a description or template for how to solve a problem that can be used in many different situations. Uses of Design Patterns Design patterns can speed up the development process by providing tested, proven development paradigms. Effective software design requires considering issues that may not become visible until later in the implementation. Often, people only understand how to apply certain software design techniques to certain problems. In addition, patterns allow developers to communicate using well-known, well understood names for software interactions. Getting Started with the Alexa Skills Kit. Overview Alexa provides a set of built-in capabilities, referred to as skills. 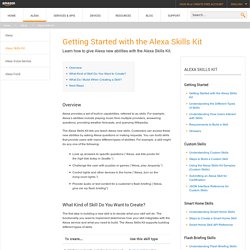 For example, Alexa’s abilities include playing music from multiple providers, answering questions, providing weather forecasts, and querying Wikipedia. The Alexa Skills Kit lets you teach Alexa new skills. Customers can access these new abilities by asking Alexa questions or making requests. You can build skills that provide users with many different types of abilities. Look up answers to specific questions (“Alexa, ask tide pooler for the high tide today in Seattle.”) What Kind of Skill Do You Want to Create? The first step in building a new skill is to decide what your skill will do. For more details about the differences between custom skills, smart home skills, and flash briefing skills see Understanding the Different Types of Skills. What Do I Build When Creating a Skill? You create a cloud-based service that handles the requests for the skill type and host it in the cloud. Next Steps.