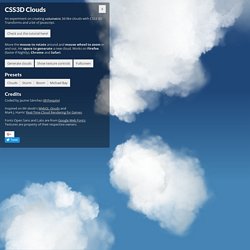 Check out the tutorial here! Move the mouse to rotate around and mouse wheel to zoom in and out. Hit space to generate a new cloud. Works on Firefox (faster if Nightly), Chrome and Safari. Texture list Select one or more textures to create clouds. White clouddark cloudsmoke cloudexplosionexplosion 2box Presets Credits Coded by Jaume Sánchez (@thespite) Original Hover Effects with CSS3. Animated Buttons with CSS3. 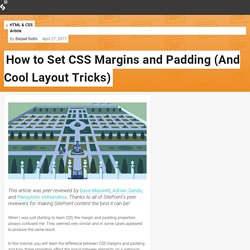 Thanks to all of SitePoint’s peer reviewers for making SitePoint content the best it can be! When I was just starting to learn CSS, the margin and padding properties always confused me. They seemed very similar and in some cases appeared to produce the same result. In this tutorial, you will learn the difference between CSS margins and padding and how these properties affect the space between elements on a webpage. We will also discuss margin collapsing, the effect of using different units while creating responsive websites, and conclude with some layout tricks you can do with CSS margins and padding. The Box Model Elements in CSS are represented as a rectangular box. ContentPadding BorderMargin The content area of an element lies in the middle of the element.

The following diagram should make the arrangement clearer. W3C box modelTraditional box model All browsers use the W3C box model by default. CSS Grid VS Flexbox: A Practical Comparison. Danny Markov Not too long ago, the layout for all HTML pages was done via tables, floats, and other CSS properties that were not well suited for styling complex web pages. 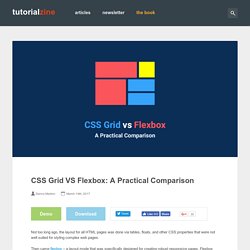 Then came flexbox – a layout mode that was specifically designed for creating robust responsive pages. Flexbox made it easy to properly align elements and their content, and is now the preferred CSS system of most web developers. Now we have a new contender for the best-system-to-build-html-layouts trophy (trophy title is a work in progress). It is the mighty CSS Grid, and by the end of this month, it will be available natively in Firefox 52 and Chrome 57, with other browsers (hopefully) following soon. CSS Grid Layout: A New Layout Module for the Web. People have been using grid designs in magazines, newspapers, posters, etc. for a long time before the Web appeared. 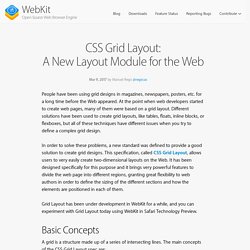 At the point when web developers started to create web pages, many of them were based on a grid layout. Different solutions have been used to create grid layouts, like tables, floats, inline blocks, or flexboxes, but all of these techniques have different issues when you try to define a complex grid design. In order to solve these problems, a new standard was defined to provide a good solution to create grid designs. This specification, called CSS Grid Layout, allows users to very easily create two-dimensional layouts on the Web. It has been designed specifically for this purpose and it brings very powerful features to divide the web page into different regions, granting great flexibility to web authors in order to define the sizing of the different sections and how the elements are positioned in each of them. 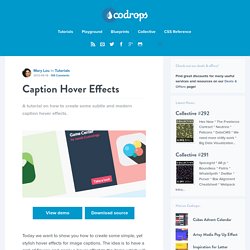 View demo Download source Today we want to show you how to create some simple, yet stylish hover effects for image captions. The idea is to have a grid of figures and apply a hover effect to the items which will reveal a caption with the title, author and a link button. Shakrmedia.github. Caption Hover Effects. Modern CSS Layouts: The Essential Characteristics. Advertisement Today, too many websites are still inaccessible. 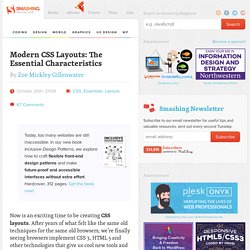 In our new book Inclusive Design Patterns, we explore how to craft flexible front-end design patterns and make future-proof and accessible interfaces without extra effort. Hardcover, 312 pages. Get the book now! Now is an exciting time to be creating CSS layouts. But all of this change can be stressful, too. Be sure to check out the following articles: We won’t talk about design trends and styles that characterize modern CSS-based layouts.

Progressively enhanced,Adaptive to diverse users,Modular,Efficient,Typographically rich. Progressive Enhancement Link Progressive enhancement means creating a solid page with appropriate markup for content and adding advanced styling (and perhaps scripting) to the page for browsers that can handle it. The idea of allowing a design to look different in different browsers is not new. TweetCC in Safari. tweetCC in IE 6. Learn more about progressive enhancement: