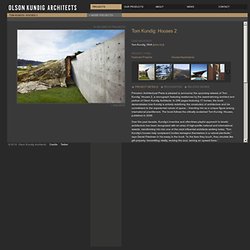 In 248 pages featuring 17 homes, the book demonstrates how Kundig is actively redefining the vocabulary of architecture and his commitment to the experiential nature of space – branding him as a unique figure among international practitioners. The book follows the critically acclaimed Tom Kundig: Houses, published in 2006. Kinetic architecture (1/3) Kinetic architecture (1/3) fLUX, Binary Waves – Lab[au] Another great project by LAb[au], “fLUX binary waves” is an urban and cybernetic installation based on the measuring of infrastructural ( passengers, cars…) and communicational ( electromagnetic fields produced by mobile phones, radio…) flows and their transposition into luminous, sonic and kinetic rules. 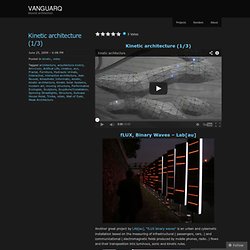 This relation between the installation and the urban activity happens in real time and sets each person as an element of the installation, as a centre of the public realm. The installation fLUX, binary waves is constituted by a network of 32 rotating and luminous panels of 3 meter-high and 60 centimetres wide, placed every 3 meters to form a kinetic wall. The panels rotate around their vertical axis, and have a black reflective surface on one side, the other being plain mat white. Shih Chieh Huang Installation artist Shih Chieh Huang transforms spaces with everyday objects. The exhibition is on till June 6th 2009. Kinetic architecture. Architecture has now come to a stage where the technical possibilities seem limitless. 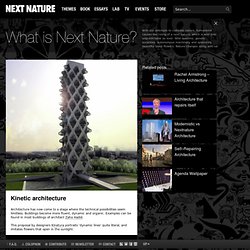 Buildings become more fluent, dynamic and organic. Examples can be found in most buildings of architect Zaha Hadid. This proposal by designers Kinetura portraits ‘dynamic lines’ quite literal, and imitates flowers that open in the sunlight. “The Kinetower’s exterior window elements respond to sunlight or user control much in the same way a flower blooms in the morning, transforming it’s hard facade into a softer and almost unrecognizable version of it’s former self. The metamorphosis is made possible by the use of material that is rigid when taut but flexible enough to bend. Via Yanko Design. 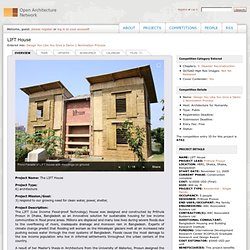 Millions are displaced and many lose lives during severe floods due to the overflowing of rivers, inadequate drainage and monsoon rain in Bangladesh. Experts of climate change predict that flooding will worsen as the Himalayan glaciers melt at an increased rate pushing excess water through the river systems of Bangladesh. A result of her Master’s thesis in Architecture from the University of Waterloo, Prosun designed the LIFT House to float upwards with rising water levels due to floods and water logging, and return to ground level as the water recedes. HBRI Housing and Building Research Institute Dhaka, Dhaka. 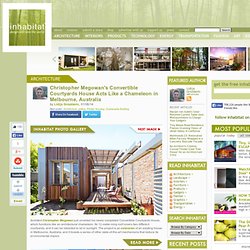 Its 12-meter-long roof covers two different courtyards, and it can be retracted to let in sunlight. The project is an extension of an existing house in Melbourne, Australia, and it boasts a series of other state-of-the-art mechanisms that reduce its environmental impact. Paleofuture Blog. Today we have two men that are either geniuses or completely crazy. 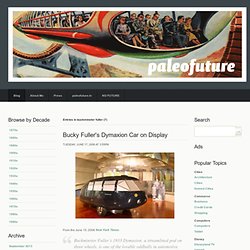 While that fine line is usually difficult to discern in any worthwhile endeavor it is especially difficult in the context of futurism. We begin with Richard Buckminster Fuller (1895-1983), perhaps most famous for inventing the geodesic dome. What may be most compelling about the man was his fascination with documenting his own life. Stanford University Libraries acquired Fuller's archives in 1999. In what is called the Dymaxion Chronofile, Fuller was obsessive about documenting everything that happened to him. Dymaxion House. Conceived and designed in the late 1920's but not actually built until 1945, the Dymaxion House was Fuller's solution to the need for a mass-produced, affordable, easily transportable and environmentally efficient house. 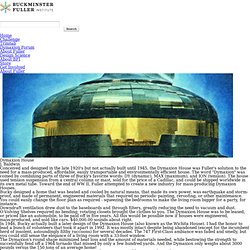 The word "Dymaxion" was coined by combining parts of three of Bucky's favorite words: DY (dynamic), MAX (maximum), and ION (tension). The house used tension suspension from a central column or mast, sold for the price of a Cadillac, and could be shipped worldwide in its own metal tube. Toward the end of WW II, Fuller attempted to create a new industry for mass-producing Dymaxion Houses. Bucky designed a home that was heated and cooled by natural means, that made its own power, was earthquake and storm-proof, and made of permanent, engineered materials that required no periodic painting, reroofing, or other maintenance.