Toxic Colors: Synthetically Dyed Clothes Harm the Environment and Could Harm Your Health Too! - Unity Outfitters. That little black dress you are wearing is one of the top producers of industrial wastewater pollution worldwide, our addiction to toxic colors is destroying the planet. 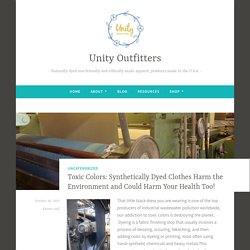 Dyeing is a fabric finishing step that usually involves a process of desizing, scouring, bleaching, and then adding color by dyeing or printing, most often using harsh synthetic chemicals and heavy metals.This process impacts not only the workers, but also the environment and the general public. The master weaver: London’s first micro mill in 100 years creates eco-friendly and unique textiles. Micro has become something of a buzzword: we’ve had micro breweries, micro roasteries, even micro flats. 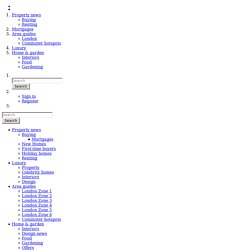 But when Daniel Harris established the London Cloth Company in Clapton in 2011, he opened London’s first micro mill. It was also the first mill of any size to be opened in the capital for more than a century. Having taken a degree in sewing and worked for eight years stitching fabrics for TV, film and fashion, Harris bought his first loom, rescuing it from an old barn in Wales. Automated Sewbot to make 800,000 adidas T-shirts daily. Technology developed in the USA will be used by a Chinese company to supply European sports brand adidas with T-shirts made in the US by robots. 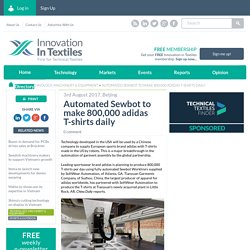 This is a major breakthrough in the automation of garment assembly by the global partnership. Leading sportswear brand adidas is planning to produce 800,000 T-shirts per day using fully automated Sewbot Workline’s supplied by SoftWear Automation, of Atlanta, GA. Tianyuan Garments Company, of Suzhou, China, the largest producer of apparel for adidas worldwide, has partnered with SoftWear Automation to produce the T-shirts at Tianyuan's newly acquired plant in Little Rock, AR, China Daily reports. Using cameras to map the fabric and robots to steer it through the sewing needles, the system will handle soft fabrics and make the T-shirts for adidas on the system which is scheduled to be fully operational by the end of next year. How a custom blazer in 90 minutes just might change the apparel business. BOSTON — With its tidy racks of dress shirts, trousers and sweaters, the Ministry of Supply shop on Newbury Street looks, in many ways, similar to other clothing stores. 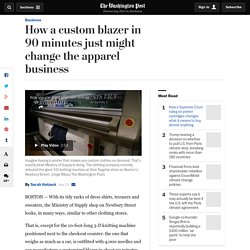 That is, except for the 10-foot-long 3-D knitting machine positioned next to the checkout counter: the one that weighs as much as a car, is outfitted with 4,000 needles and can manufacture a customized blazer in about 90 minutes. The process requires little in the way of human labor. After a customer selects the colors, cuffs and buttons of the garment, an employee programs the device to crank out a jacket to those specifications. Acabados de las prendas - Finitura dei capi. 012 - O Segredo das Coisas - Jeans. Local wool and old-fashioned know-how enable southern NSW sock manufacturer to weave way into niche market - ABC Rural. 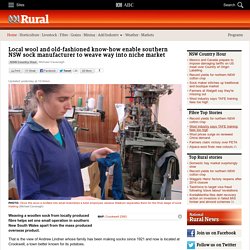 That is the view of Andrew Lindner whose family has been making socks since 1921 and now is located at Crookwell, a town better known for its potatoes. Mr Linder said carving out a niche market had been a key to staying in manufacturing in Australia, when many other companies had got out. His family operation keeps it as local as possible with only the scouring carried out overseas, in China. In his factory at the rear of the shop, found in the town's main street, Mr Lindner continually checks the different machines as the various spools of coloured wool are knitted into socks. Factories. チャートを効果的に使ったサイト「Everlane」 Everlaneは、品質にこだわったTシャツやバッグ・アクセサリーを100ドル以下で販売するオンライン・ストア（Facebookアカウントでログイン可能）です。 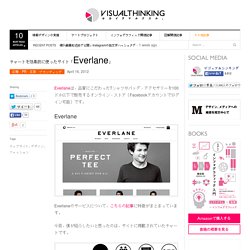 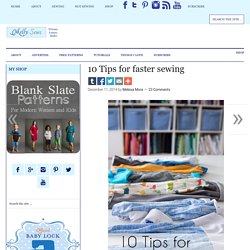 The holidays are a time of both 1) lots of sewing demands and 2) less time to sew. Which means that any little thing you can do for faster sewing is a good thing. So with that in mind, my Baby Lock machines and I are going to share our best tips for assembly line sewing today. Tip #1: Organize fabrics and Patterns I have discovered that it often takes only a little longer to sew multiple items than it does to sew one item. How to Choose Your Thread - Sew Mama Sew. Welt and paper jig.

Posted by Kathleen Fasanella on Jun 22, 2005 at 8:54 pm / Patterns, Sewing / Trackback As I mentioned yesterday, you’ll need a pattern for a paper jig into which you’ll stick the welt and press it. 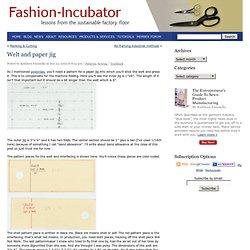 Get Into Textiles: Textiles: Mass Production And Techniques - Ep 5 Of 10. 15 things home sewers can learn from industrial sewing