The Plimoth Jacket™ A Paradise in Silk and Gold In 2009, Plimoth Plantation completed an ambitious project to re-create a woman's embroidered waistcoat of the early 1600s. 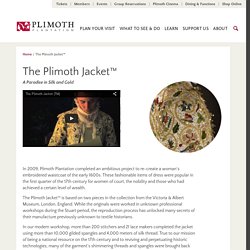 These fashionable items of dress were popular in the first quarter of the 17th century for women of court, the nobility and those who had achieved a certain level of wealth. The Plimoth Jacket™ is based on two pieces in the collection from the Victoria & Albert Museum, London, England. While the originals were worked in unknown professional workshops during the Stuart period, the reproduction process has unlocked many secrets of their manufacture previously unknown to textile historians.

The Bedazzling of the American Gymnast. Though television brings all the athletes up close, they can get lost amid the actual competition on the floor, and shine helps highlight and distinguish each girl. 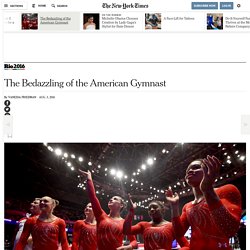 “When the judges are there, every little thing counts,” said Samantha Peszek, a member of the 2008 Olympic team who is working for NBC’s digital and social content team for this summer’s games. The crystals also serve to emphasize the aesthetic aspect of a sport that has become ever more focused on athleticism and tricks — to its detriment, some argue. In a way, the fanciness and drama of the leotards can be seen as an attempt to correct a perceived imbalance between artistic power and physical power: telegraphing the idea that while “our skill level says one thing, our dress style says another.” The Olympic stadium “is the biggest stage of our lives,” Ms.

Historic Costumes and How to Make Them. This practical and informative guidebook is a "must-have" for anyone planning to create accurate period costumes for theatrical productions and historical reenactments. 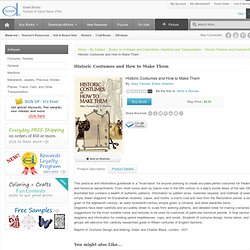 From short tunics worn by Saxon men in the fifth century to a lady's bustle dress of the late 1800s, this profusely illustrated text contains a wealth of authentic patterns. Screen style & identity. The Costumer's Guide to Movie Costumes. Archived News - May 2009 Thanks to Berg for pointing out that this website carries various movie costume-related jumpsuits, including Lost. 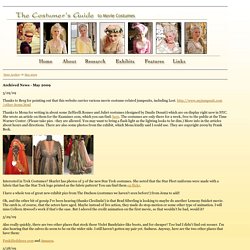 Thanks to Mona for writing in about some Zeffirelli Romeo and Juliet costumes (designed by Danilo Donati) which are on display right now in NYC. Undertaking the Making: Costume & Textiles Pattern Project. Prince broke all the rules of fashion, and damn did he look good. Was there ever a male performer more enamored with ruffles — or lace or velvet — than Prince? 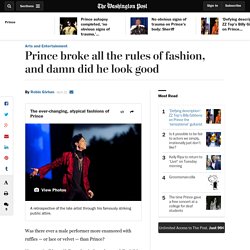 He wore it all beautifully, seductively and powerfully. With his frilly shirts and velvet suits, his brocades and silks, Prince played with gender stereotypes and moved us to to reconsider our relationship to our own sexuality. He used fashion as an aphrodisiac. TBT: Ever After (1998) Designer transforms your favorite fandoms into fashionable costumes.

What if Harley Quinn wore bloomers and the Joker were a saucy Victorian maiden? 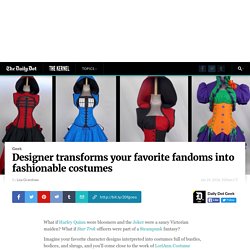 What if Star Trek officers were part of a Steampunk fantasy? Imagine your favorite character designs interpreted into costumes full of bustles, bodices, and shrugs, and you'll come close to the work of LoriAnn Costume Designs, where the reality is probably better than you envisioned. LoriAnn Gerlisky's designs feature a range of styles, from Renaissance to Steampunk and even pirate looks.

But it’s when these stunning pieces are given a pop culture twist that they particularly take our breathe away. Gerlisky's been sewing for as long as she can remember. LoriAnn Gerlisky Her journey to selling her work online and creating pop culture-inspired items began with a suggestion from her mother. Encounters in the Archive: Reflections on costume. Donatella Barbieri London College of Fashion / V&A Research Fellow in Design for Performance Abstract Encounters in the Archive will be shown in the Tapestries Court at the V&A in 2012 as part of Transformation and Revelation, a series of displays produced by the Theatre and Performance Department in collaboration with the Society of British Theatre Designers. 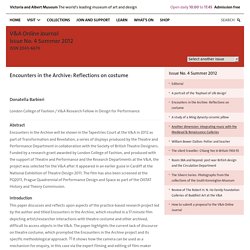 7 of the Most Expensive Movie Dresses of All Time, From Breakfast at Tiffany’s to Titanic. Downton Abbey's New Costume Designer Tells Us All About Season 5 - Fashionista. This week I'm skipping my usual "Downton Abbey" fashion recap to bring you a mid-season interview with the show's costume designer, Anna Robbins. 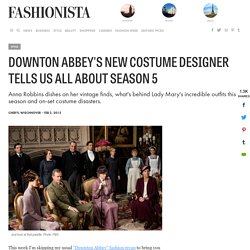 Robbins, who originally studied law and never looked back when she discovered costume design, joined "Downton" as costume designer for season five. If you've noticed that the costumes seem more, well, elevated this season, it's not your imagination. She's definitely put her creative stamp on the series. Fashionable Stages: Creating a Costume or Creating an Advertising Opportunity? - Irenebrination: Notes on Architecture, Art, Fashion and Style.

If you're a professional costume designer at the moment you're definitely not harbouring good thoughts about the fashion industry. 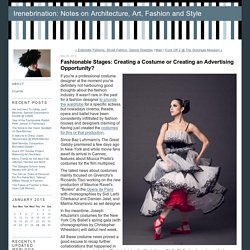 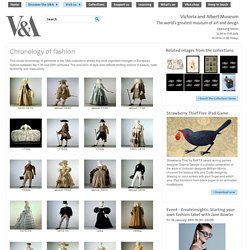 Museum no. As I Said...: Fashion In Film: The Great Gatsby (2013) Director: Baz Luhrmann Leonardo DiCaprio, Carey MulliganCostume Design: Catherine Martin Let's say, you hear that Baz Luhrmann is beginning a new movie project, what do you expect? Well, I expected, pomp, circumstance, excess, flash, music, sound, and fury. Was I disappointed? With those elements? No. Anyone who's seen Strictly Ballroom, Romeo + Juliet, or Moulin Rouge would surely know what to expect. They did do extensive research; Deirdre Clemente of the blog Fitzgerald And Fashion served as one historical consultant.