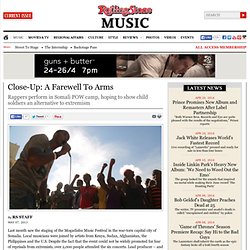 Gerstle::/photo_credits:: ::event_date::::/event_date:: Rappers perform in Somali POW camp, hoping to show child soldiers an alternative to extremism By RS Staff May 07, 2013 Last month saw the staging of the Mogadishu Music Festival in the war-torn capital city of Somalia. ::pf_add_img_1::images/stories/rsme/music/features/2013/May/closeupmog150x115.jpg::/pf_add_img_1:: Somalia Islamists abandon Kismayo amid AU attack. 29 September 2012Last updated at 07:39 ET The BBC's Gabriel Gatehouse says residents are nervous about what may happen when troops enter the city. 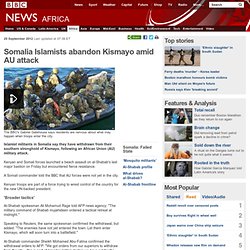 Islamist militants in Somalia say they have withdrawn from their southern stronghold of Kismayo, following an African Union (AU) military attack. Kenyan and Somali forces launched a beach assault on al-Shabab's last major bastion on Friday but encountered fierce resistance. A Somali commander told the BBC that AU forces were not yet in the city. Kenyan troops are part of a force trying to wrest control of the country for the new UN-backed president. 'Broader tactics' Al-Shabab spokesman Ali Mohamud Rage told AFP news agency: "The military command of Shabab mujahideen ordered a tactical retreat at midnight. " Speaking to Reuters, the same spokesman confirmed the withdrawal, but added: "The enemies have not yet entered the town.

But he said the people of Kismayo were "very happy and were welcoming Kenyan and Somali troops with both arms". Analysis. 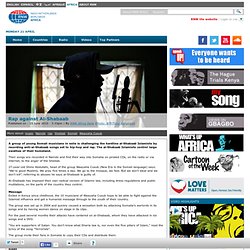 The al-Shabaab Islamists control large swathes of their homeland. Their songs are recorded in Nairobi and find their way into Somalia on pirated CDs, on the radio or via internet, to the anger of the Shebab. 27-year-old Shino Abdullahi, head of the group Waayaha Cusub (New Era in the Somali language) says: "We're good Muslims. We pray five times a day.

We go to the mosque, we fast. Al-Shabaab has imposed their own radical version of Islamic law, including dress regulations and public mutilations, on the parts of the country they control. The group was set up in 2004 and quickly caused a sensation both by attacking Somalia's warlords in its songs and by having women dance on stage in its clips. For the past several months their attacks have centered on al-Shabaab, whom they have attacked in six songs and a DVD. "You are supporters of Satan. Matador Network DanG. Lixle and Shiine of Waayaha Cusub. 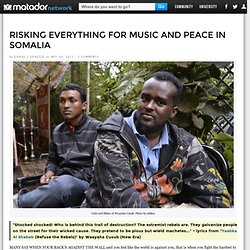 Photo by author. “Shocked shocked! Who is behind this trail of destruction? The extremist rebels are. They galvanize people on the street for their wicked cause. MANY SAY WHEN YOUR BACK’S AGAINST THE WALL and you feel like the world is against you, that is when you fight the hardest to live and to thrive. Daily Nation. By Mwaura Samora msamora@ke.nationmedia.com Shiine Abdullahi Ali has weathered many storms in his quest to fight the ills that afflict the Somali people. 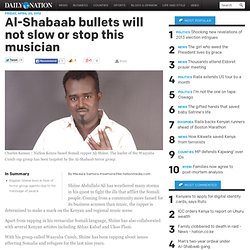 Coming from a community more famed for its business acumen than music, the rapper is determined to make a mark on the Kenyan and regional music scene. Apart from rapping in his vernacular Somali language, Shiine has also collaborated with several Kenyan artistes including Abbas Kubaf and Ukoo Flani. With his group called Waayaha Cusub, Shiine has been rapping about issues affecting Somalia and refugees for the last nine years. Free Muse. The video is produced by Daniel J. 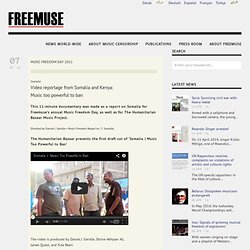