How to Wear a Sari / Wrap a Sari. Harrysmum's Klimt Babette. Sneak Peek: Best of Bathrooms. The bathroom can be one of the most difficult rooms to decorate. 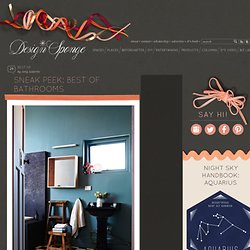 You have to work around so many bulky fixtures and utilitarian objects. My favorite bathrooms are those that treat the space as an extension of the house, with vintage objects, great artwork and beautiful rugs. Here are 50 great bathrooms that do it right. — Amy Azzarito For more inspiration, see our other Best of Bathrooms: Image above: A dark and dramatic bathroom that didn’t cost an arm and a leg. Image above: This dark color is chalkboard paint mixed with 10% white. Image above: Color can make a huge impact in a tiny bathroom. See all 50 bathrooms after the jump . . . Image above: Dark colors can do wonders for a bathroom.

Image above: In the bathroom of his country escape in Victoria, Australia, the homeowner managed to find a matching sink and tub for only $60! Image above: The homeowner found all the items for her nautically themed bathroom in Australia from eBay. Image above: Dream shower in Austin, Texas. Braids 101. Obsession : Fishtail braids. 1 INSIDE OUT FRENCH BRAID & 2 TWISTS. Photos/post/graphic design: Kristin Ess Let’s say your friend is getting married. 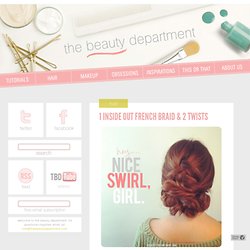 And let’s say she asks you to help her with her hair. And let’s say you panic. This has happened to a few people I know recently, and it’s mostly because destination weddings are such a big thing right now. People are getting married in rural countryside barns, on a lake, in the forest and on scenic hill tops all across the country. Hair Romance. Hair Romance is a wonderful blog dedicated to all things hair related, where Christina, a super lovely australian blogger, offers a lot of valuable hair advice. 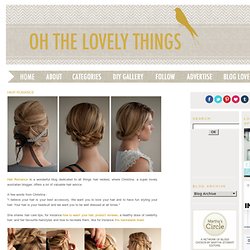 A few words from Christina : "I believe your hair is your best accessory. We want you to love your hair and to have fun styling your hair. Your hair is your headsuit and we want you to be well dressed at all times. " During the month of May 2011, she posted a hairstyle everyday. She created 30 gorgeous hairstyles in 30 days! Her hairstyle challenge has been so popular that she designed tutorials for all the hairstyles in an easy reference ebook.

She says that the hairstyles are easy to master and that if she can do it, we can do it too. » The first lime «: Homemade pore strips! Steps 1-2: First take one spoon of milk and one of Unflavored Gelatin (it works with flavored too!). 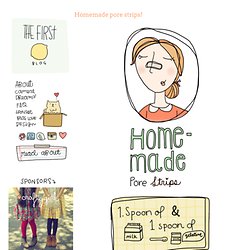 Mix it very well, and then microwave for about 15 seconds. Step 3: Place the mixture over your nose and wait for about 30 minutes, peel it of and you are done! Nail Polish Prints. Finally I took the time to paint my nails- to try the rubbing alcohol prints! 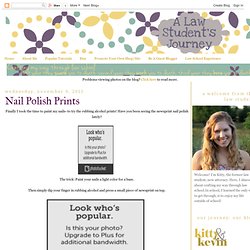 Have you been seeing the newsprint nail polish lately? The trick: Paint your nails a light color for a base. Then simply dip your finger in rubbing alcohol and press a small piece of newsprint on top. You want to hold it on there for about 30 seconds, I thought you could just press and go...but you need the ink to be dark. I realized that after a couple of fingers. I read you could use other prints as well. There I learned- the simple patterns are best. 9 Step Dark Smokey Eye Tutorial. 9 Step Dark Smokey Eye Tutorial >> Check out the updated version of this tutorial here! 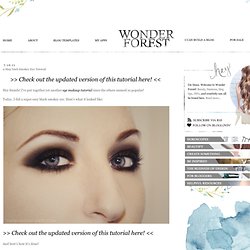 << Hey friends! I've put together yet another eye makeup tutorial since the others seemed so popular! Today, I did a super easy black smokey eye. >> Check out the updated version of this tutorial here! Mistletoe Berries - Pottermore Wiki. Mistletoe Berries are an ingredient used in potion-making. 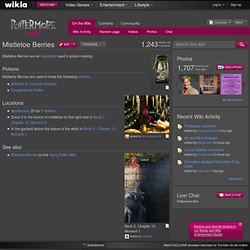 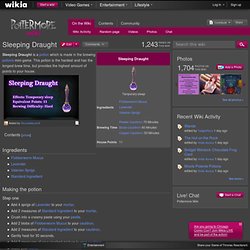 This potion is the hardest and has the longest brew time, but provides the highest amount of points to your house. Ingredients Making the potion Step one Add 4 sprigs of Lavender to your mortar. Step two Add 2 measures of Standard Ingredient to your cauldron. Brew times Time to return to cauldron. Listen to Bob Dylan's Nobel Lecture (VIDEO). AFP/Getty Images Bob Dylan’s reluctance to even acknowledge he’d won the Nobel Prize for Literature, let alone show up to accept it in person, produced plenty of accidental comedy—to say nothing of a pronounced debate over whether songwriting could be considered a branch of literature. 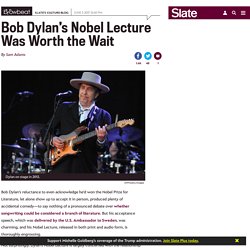 But his acceptance speech, which was delivered by the U.S. Ambassador to Sweden, was charming, and his Nobel Lecture, released in both print and audio form, is thoroughly engrossing. Not surprisingly, Dylan’s Nobel Lecture is largely concerned with the relationship between literature and music, tracing, in what he admits is “a roundabout way,” a path through the songs and the novels that made the deepest impression on him. Dylan writes (and talks) about internalizing the vernacular of the folk and blues music that first inspired him: El Depósito del Tranvía – LEÓN ANTIGUO. Por: Luis Alegre Milenio León, 31 de mayo de 2009 El 27 de julio de 1882 comenzó a funcionar el servicio de tranvías en León. 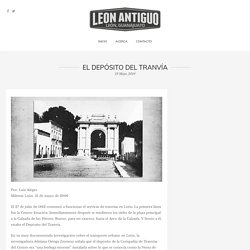