The History of Information

If the Medium is the Message, Would McLuhan Like PowerPoint? Marshall McLuhan was one of the earliest scholars to discuss the changing nature of media in the electronic age and today would have been his 100th birthday. 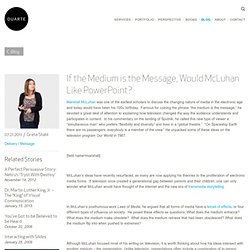 Famous for coining the phrase “the medium is the message,” he devoted a great deal of attention to explaining how television changed the way the audience understands and participates in content. In his commentary on the landing of Sputnik, he called this new type of viewer a “simultaneous man” who prefers “flexibility and diversity” and lives in a “global theatre.” “On Spaceship Earth there are no passengers; everybody is a member of the crew.” He unpacked some of these ideas on the television program Our World in 1967. [field name=marshall] McLuhan’s ideas have recently resurfaced, as many are now applying his theories to the proliferation of electronic media forms. In McLuhan’s posthumous work Laws of Media, he argued that all forms of media have a tetrad of effects, or four different types of influence on society. 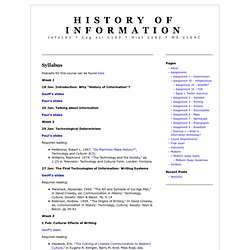 Blog - History of Information. Introduction The telegraph was the result of a slew of inventions from all over the world. 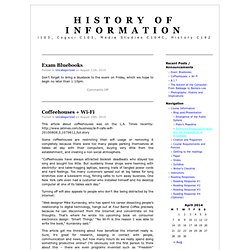 For simplicity sake, I would like to focus on the invention of the telegraph in America and its reception by the society. Many are unaware of the fact that the telegraph actually “preceded the railroad in forging extra local and interregional links (Du Boff 461).” The reason for this was that the telegraph was used primarily for business reasons. Prior to the creation and distribution of the telegraph, America experienced a “business revolution (460).” Source: -Cinthia Do The Era of Monopoly: 1880-1893 The emergence of the first telephone system began with the invention of the switchboard in the early 1880s. Although the switchboard system provided a new medium for interconnection, privacy remained a major issue. To get an idea of the relationship between gossip, information, and the telephone, here is a YouTube clip from I Love Lucy. -Keisha Soleta -Ricardo Gomez When J. -Genevieve Wong -Marianne Hanna.

History of Information (I)