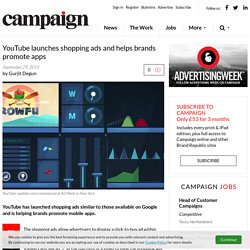 Viewers will see an "i" at the top right of a video to view the shopping ads. They will be in the same format as YouTube’s TrueView display which uses "info cards". The updates to YouTube were announced at Ad Week New York today. TrueView has been running for five years. The feature charges advertisers for their ad only when a user chooses to watch it for longer than 30 seconds. In a blog post Diya Jolly, the director of video ads product management, said: "Shopping ads on YouTube provide an entirely new revenue stream for creators, providing another way to monetize product-focused videos. "They also provide a more interactive experience for viewers, letting them shop directly from videos. YouTube is also helping advertisers promote their mobile apps through its videos. Advertisers will be able to promote their apps in YouTube’s gaming app too. Follow @GurjitDegun. Consumer retail trends 2015. Marks & Spencer's head of clothing quits retailer after sales slip.

The Marks & Spencer director in charge of the retailer’s clothing and homewares business has quit after nearly 30 years with the business. 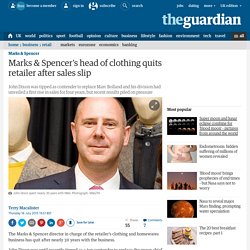 John Dixon was until recently tipped as a top contender to replace the group chief executive, Marc Bolland. Dixon will be replaced as head of general merchandise by Steve Rowe, who was the head of food. M&S clothing sales suffer spring falls. Marks & Spencer took a battering from independent investors over poor designs and low pay at its annual shareholder meeting as it revealed a renewed slide in clothing sales this spring. 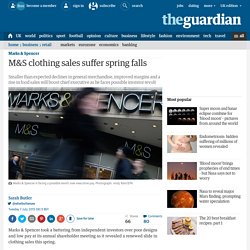 Shares in the retailer fell 2% as it said sales of clothing and homeware had slipped 0.4% at established stores in the three months to 13 June. The sales fall is a blow for the chief executive, Marc Bolland, after M&S delivered its first rise in clothing sales in four years in the previous quarter. Worker confronts M&S chief over 'poverty wages' Marks and Spencer’s chief executive, Marc Bolland, has been confronted by one of his employees demanding that he pay staff the living wage. 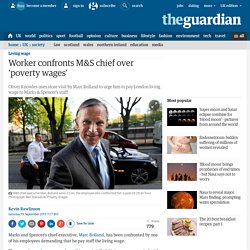 The executive, whose pay package this year totalled £2.1m, was presented with a T-shirt on Friday bearing the slogan “simply pay your M&S staff living wage” by 27-year-old shop worker Oliver Knowles. Bolland declined to wear it, but did take it with him. Has Supreme Lost its Edge? 'Putting the D in bread': Marks and Spencer's unfortunate ad campaign is ridiculed online. Marks & Spencers - Latest news about the Marks and Spencer Group, stocks and shares prices. 28 September 1894: Marks and Spencer opens its first 'Penny Bazaar' With a reputation for good quality, if occasionally slightly dull, merchandise, and as the grocer to Britain’s middle classes (alongside Waitrose), it’s perhaps a little surprising to find out that solid, dependable Marks & Spencer started out life as the 19th-century equivalent of a pound shop in the north of England. 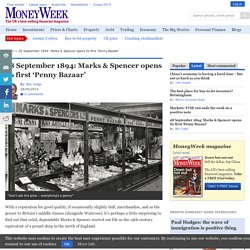 Michael Marks was a refugee from eastern Europe. Originally from Slonim in Belarus, he made his way to Leeds, where he set up a stall in Kirkgate Market. The rise and fall of American Apparel. It wasn't having oral sex with an employee in front of a female journalist that now threatens to undo Dov Charney, founder of American Apparel. 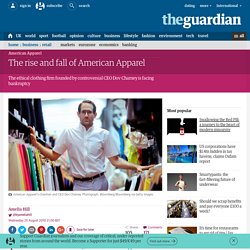 The sock is not, one should add, worn on his foot. For the exhibitionist Charney, whose excesses are the stuff of fashion-industry legend, to be finally humbled by accounts that are more street corner than Wall Street is, some might think, a bit like Al Capone finally being brought to book over tax evasion. Asos founder Nick Robertson stands down - BBC News. Image copyright Getty Images Nick Robertson, the founder and chief executive of online fashion retailer Asos is to stand down after 15 years, the company has announced. 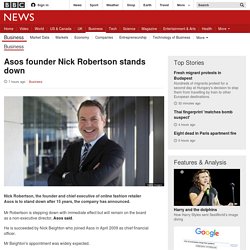 Mr Robertson is stepping down with immediate effect but will remain on the board as a non-executive director, Asos said. He is succeeded by Nick Beighton who joined Asos in April 2009 as chief financial officer. Mr Beighton's appointment was widely expected. The rise of the midi: next season's boot height. Fashion loves nothing more than discovering a new body zone – and the trickier, the better. 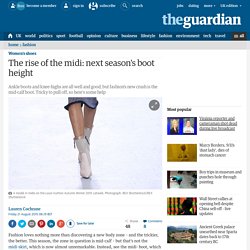 This season, the zone in question is mid-calf – but that’s not the midi-skirt, which is now almost unremarkable. Instead, see the midi- boot, which reaches not quite to the knee but anywhere between 10 and 20cm shy in a sort of no-man’s-land of leg. Ankle and knee boots will not do this winter: the midi-boot is the alpha choice and, at first glance, it requires the slender limbs of a barre core devotee to match. The midi-boot had catwalk approval, of course – seen at brands ranging from Jonathan Saunders to Marni and JW Anderson.