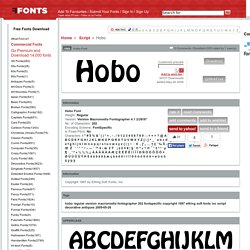 Tags Free Fonts Download. Create a Dark Grunge 3D Text Scene in Photoshop. In this Photoshop tutorial, you are going to learn how to create some 3D text using only Photoshop. 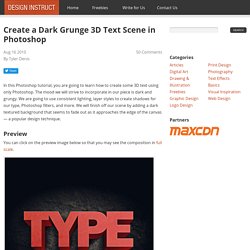 The mood we will strive to incorporate in our piece is dark and grungy. We are going to use consistent lighting, layer styles to create shadows for our type, Photoshop filters, and more. We will finish off our scene by adding a dark textured background that seems to fade out as it approaches the edge of the canvas — a popular design technique. Preview You can click on the preview image below so that you may see the composition in full scale. Tutorial Resources Texture: Lava Rock Texture 01 by Bill ChambersTexture: Experimental Grunge by Zen Textures Step 1: Open Photoshop and Set Up Your Canvas Open up Photoshop and create a new 1200x1200px document at 72 dpi.

Step 2: Add the Text Next, we want to create some text, so let’s use the Horizontal Type Tool (T) to type the text "TYPE" using Franklin Gothic Heavy, or a similar heavy font. Step 3: Duplicate the Text Step 4: Connecting the Text. Add Fantastic Color to 3D Text - Part I. This is the first part of a two part series. 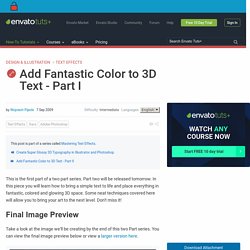 Part two will be released tomorrow. Create Destructive Black and White Lettering with a Dramatic Splash Effect. Today, I'm gonna take you into the beauty of black and white design. 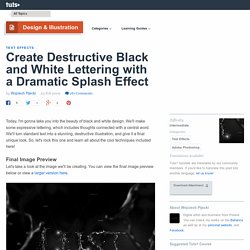 We'll make some expressive lettering, which includes thoughts connected with a central word. We'll turn standard text into a stunning, destructive illustration, and give it a final unique look. So, let's rock this one and learn all about the cool techniques included here! Let's take a look at the image we'll be creating. You can view the final image preview below or view a larger version here. Create a Steam Powered Typographic Treatment - Part I. Whether or not you're a Steampunk fan, this two part tutorial is sure to test your knowledge on Illustrator, Cinema 4D and Photoshop. 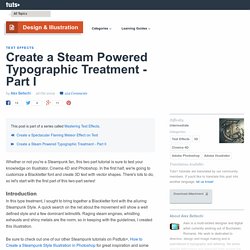 In the first half, we're going to customize a Blackletter font and create 3D text with vector shapes. There's lots to do, so let's start with the first part of this two-part series! In this type treatment, I sought to bring together a Blackletter font with the alluring Steampunk Style. A quick search on the net about the movement will show a well defined style and a few dominant leitmotifs.

Raging steam engines, whistling exhausts and shiny metals are the norm, so in keeping with the guidelines, I created this illustration. Tron Legacy Tutorial. Since the very first time I saw the trailer of Tron Legacy I decided that I would have to try to do something inspired on that, all those light effects were exactly what I always love to do in Photoshop. 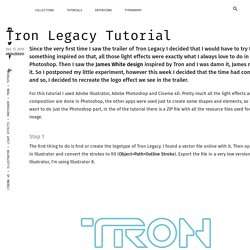 Then I saw the James White design inspired by Tron and I was damn it, James nailed it. So I postponed my little experiment, however this week I decided that the time had come and so, I decided to recreate the logo effect we see in the trailer. For this tutorial I used Adobe Illustrator, Adobe Photoshop and Cinema 4D. Pretty much all the light effects and composition are done in Photoshop, the other apps were used just to create some shapes and elements, so if you want to do just the Photoshop part, in the of the tutorial there is a ZIP file with all the resource files used for this image. Step 1 The first thing to do is find or create the logotype of Tron Legacy. Step 2 Once you have the vector logo it's time to create the 3D version of it. Step 3 Step 4 Step 5. Create a Harry Potter Style Text Effect in Photoshop. Just watched Harry Potter and the Deathly Hallows. 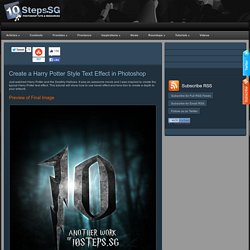 It was an awesome movie and I was inspired to create the typical Harry Potter text effect. This tutorial will show how to use bevel effect and lens blur to create a depth to your artwork. Preview of Final Image Create an A4 size document with 300dpi resolution. Set the Background to black color. Right-click on the text layer and choose Blending Options. Nice 3D Text Effect In Photoshop CS5. This tutorial will explain some basic 3D concepts in the Photoshop CS5 Extended environment, in order to create a nice 3D text.

It aims to provide a step-by-step guide to creating a 3D scene, and presents some tips and techniques for using Repoussé, applying materials, combining 3D layers, dealing with the object, mesh and camera tools, shadows and reflections, and some rendering basics as well. Then, it will explain how to adjust the output to get the final result. The Final Result. Poster from the Words. Would you like to make your own cool musical poster? 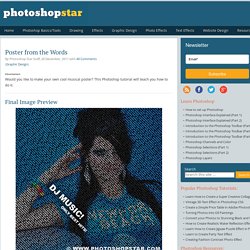 This Photoshop tutorial will teach you how to do it. Final Image Preview Resources Girl Step 1. Create This Dazzling 3D Text Effect in Photoshop. In this tutorial, you will learn how to create 3D text in Illustrator then transfer it to Photoshop to apply the effects. 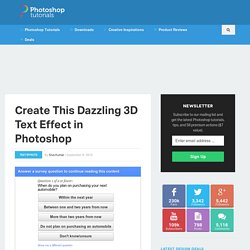 You’ll learn how to apply styles to regular 3D text to create a stunning design. Preview of Final Result Dazzling 3D Text Effect Photoshop Tutorial When ever you create any effects, use the action palette to store the functions because if you need the same effect again it will be easier for you to get the same result. How To Create Great Typographic Wallpaper In Photoshop. Create a Cool Liquid Text Effect with Feather Brush Decoration in Photoshop. In this tutorial, I will show you the steps I took to create this Cool Liquid Text Effect with Feather Brush Decoration in Photoshop. This is an intermediate level tutorials and some steps can be a bit tricky, but why not have a try! We will be heavily using the liquid filter (which in my opinion is one of the most versatile tools in Photoshop) in this tutorial.

Create Awesome Black and White Abstract Text Effect in Photoshop. In this tutorial, I will show you the steps I took to Create Awesome Black and White Abstract Text Effect in Photoshop. The main focus of this tutorial is the use of layer masking techniques, plus some interesting drawing skills. Have a try! This is an intermediate tutorial so some steps can be tricky – if you’re having difficulty with it, I suggest you go to the basic section of PSD Vault and practice those tutorials first, then come back and do this one. Here is a preview of the final effect I have for this tutorial: (Click to Enlarge) PSD File Download You can download the PSD File for this tutorial via the VIP Members Area for only $6.95/Month (or less)! Ok Let’s get started! Create a Dream Design with 3D Typography. Hello, my name is Alex Beltechi, a designer that is currently studying in college and working in the print media realm.

I would love to explain my vast experience and overwhelming knowledge to you, but due to the fact that I have no such qualities, I’ll stick to sharing what skills I’ve been developing lately, through tutorials. Among keyboard shortcuts and mouse clicks, I enthusiastically tap piano keys and dream of adjusting a lens’ focus. And in case you’d like to find me on the web, you can read my tutorials on PSDTUTS or see more of my work on my Behance portfolio.