Designer Collaborations. A good collaboration requires teamwork, and the new Tiny Prints and POPSUGAR Curated Collection is a match made in heaven. 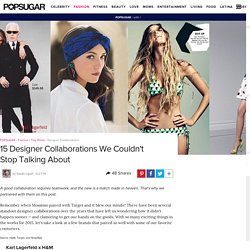 That's why we partnered with them on this post. Remember when Mossimo paired with Target and it blew our minds? There have been several standout designer collaborations over the years that have left us wondering how it didn't happen sooner — and clamoring to get our hands on the goods. With so many exciting things in the works for 2015, let's take a look at a few brands that paired so well with some of our favorite couturiers. Vivienne Westwood chronology. 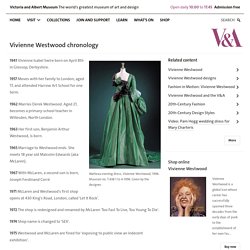 Museum no. T.438:1 to 4-1996. Given by the designer. 1941 Vivienne Isabel Swire born on April 8th in Glossop, Derbyshire. 1957 Moves with her family to London, aged 17, and attended Harrow Art School for one term. 1962 Marries Derek Westwood. Emakina - Karl Lagerfeld. Regent Street London. As with most websites we use cookies to improve your user experience by enabling our website to ‘remember you’, either for the duration of your visit (using a ‘session cookie’) or for repeat visits (using a ‘persistent cookie’). 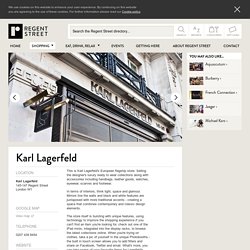 There are also two different types of cookies - first party (which we own) and third party (where we allow a third party, such as Google, to set cookies on your computer or mobile device). Cookies do lots of different jobs, like letting you navigate between pages efficiently, storing your preferences, and generally improving your experience of a website. Cookies make the interaction between you and the website faster and easier. If a website doesn’t use cookies, it will think you are a new visitor every time you move to a new page on the site - for example, when you enter your login details and move to another page it won’t recognise you and it won’t be able to keep you logged in.

How to refuse or withdraw consent. What Makes a Good Collaboration? Target’s latest design collaboration, a 250-piece collection with old school Palm Beach brand Lilly Pulitzer, doesn’t hit stores until April 19. Yet editors and fans alike have are expecting a hit. “Lilly Pulitzer seems like a safe -- but smart -- bet for Target; its visual identity is established and its customer base is fanatic,” wrote Racked’s Nicola Fumo. “I’ll be camping outside Target for the next four months....,” commented @sjwiley on an Elle magazine Instagram post.

The appeal of Lilly for Target is easy to understand. The brand is bright, cheerful and aspirational. “First off, even when they’re not successful, they’re successful,” says Marshal Cohen, chief industry analyst at the market research firm NPD Group, who has been been tracking these partnerships closely since Isaac Mizrahi hit Target in 2002. It’s not that mass retailers don’t want collaborations to sell out. Choupette Lagerfeld Book - Karl Lagerfeld's Cat.

Images. The Maddening and Brilliant Karl Lagerfeld. THE HISTORY OF FASHION is the history of longing. 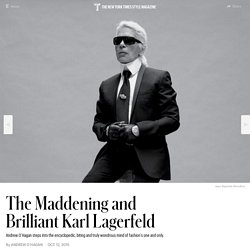 Nobody is born stylish. Everybody wants to be a little memorable, and some would like to be somebody else, or more like the self we see in the better part of our minds. It’s about one hundred years since fashion took its place alongside literature, painting and music as a way to look for the social essence of one’s era. Proust saw it happening, and, in ‘‘In Search of Lost Time,’’ Madame de Guermantes’s dresses are ‘‘not a casual decoration alterable at will, but a given, poetical reality like that of the weather, or the light peculiar to a certain hour of the day.’’ I tried to recall the passage as I waited for Karl Lagerfeld in his Paris apartment off the Boulevard St. Continue reading the main story Video The room is all about the books, lying horizontally on towering shelves that go to the ceiling.

‘‘You have no past?’’ ‘‘Not as far as I remember. I believe he is talking about Yves Saint Laurent. And so we began. ‘‘Yes,’’ he said. Karl Lagerfeld Photos to Be Shown in Paris. KARL IN THE FRAME: Karl Lagerfeld trains his camera on wherever his varied interests take him: fashion, architecture, Paris at night and all manner of personalities. 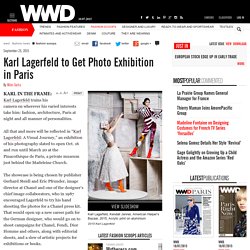 All that and more will be reflected in “Karl Lagerfeld: A Visual Journey,” an exhibition of his photography slated to open Oct. 16 and run until March 20 at the Pinacothèque de Paris, a private museum just behind the Madeleine Church. The showcase is being chosen by publisher Gerhard Steidl and Eric Pfrunder, image director at Chanel and one of the designer’s chief image collaborators, who in 1987 encouraged Lagerfeld to try his hand shooting the photos for a Chanel press kit. That would open up a new career path for the German designer, who would go on to shoot campaigns for Chanel, Fendi, Dior Homme and others, along with editorial shoots, and a slew of artistic projects for exhibitions or books. “People always want to know about my style of photography. I can’t answer that,” according to Lagerfeld. Department Store Retailing - UK - April 2015. Home. 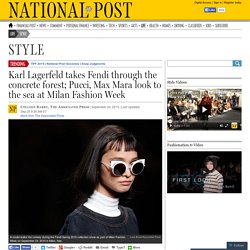 After a drenching opening day, the sun came out for the second day of womenswear previews for next spring and summer on Thursday, lightening moods and allowing the fashion crowd again to show off its style prowess on the streets of Milan, after a day spent dashing from cabs and cars to umbrellas. Some highlights from Thursday’s shows: Luca Bruno/Associated PressA model walks the runway during the Fendi Spring 2016 collection show as part of Milan Fashion Week on September 24, 2015 in Milan, Italy. Maid Marian wouldn’t have needed Robin Hood to defend her in these threads and skins. Karl Lagerfeld turning couture on its head. The Chanel designer put on a lavish Autumn/Winter 15 couture show in July (15), with models wearing one-off pieces on a set which looked like a casino. 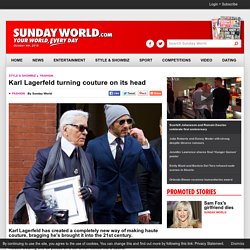 One of the looks took the label's classic quilted jacket and re-imagined it for a new generation. It was made using a high-tech laser which spun the piece using powder, reading the design and then spitting it out in 3D. Karl Lagerfeld Explains How He Got Into Fashion. "I love [to be asked] mean questions because then I can have fun. 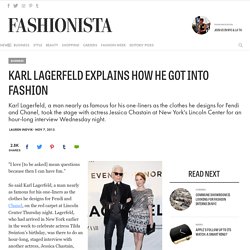 " So said Karl Lagerfeld, a man nearly as famous for his one-liners as the clothes he designs for Fendi and Chanel, on the red carpet at Lincoln Center Thursday night. Lagerfeld, who had arrived in New York earlier in the week to celebrate actress Tilda Swinton's birthday, was there to do an hour-long, staged interview with another actress, Jessica Chastain, who played moderator. Chastain's questions weren't mean, but they were at times daringly personal. When Chastain asked the German-born Lagerfeld what kind of pajamas he wore to bed, he politely declined to answer. On other subjects, the 80-year-old designer was more forthcoming, and as the talk progressed he grew more serious, offering some (seemingly genuine) insights into his life and interests. Karl Lagerfeld interview – Shopping & Style – Time Out London. © Photography by Karl Lagerfeld Chanel is for the mega-rich. 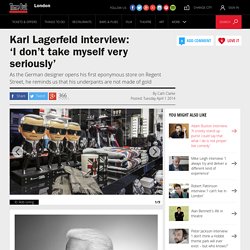 Is the Karl Lagerfeld range more democratic? ‘It’s more affordable, less expensive. My business partner wanted Karl Lagerfeld to be on the same level as Chanel. But I said no. Karl Lagerfeld interview: 'Keira had the least pretentious wedding ever' Custodian of the house of Chanel for 30 years, Karl Lagerfeld talks to Kate Finnigan about Keira Knightley's wedding, Coco's legacy and why Twitter bores him to tears. 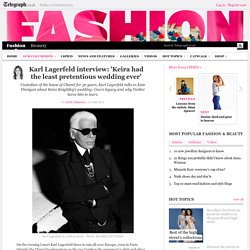 BY Kate Finnigan | 10 June 2013 Karl Lagerfeld in a self-portrait. Photo: MATRIX PICTURES. Chanel, H&M, Macy’s, Diet Coke: What Should Karl Lagerfeld Design Next? Never again will you see Lagerfeld in H&M. Img-thing? World's Most Powerful Luxury Brands. Karl Lagerfeld Launches New Label. 19 March 2012 Lauren Milligan Updated Monday March 19, 2.20pm: Go inside Karl Lagerfeld's world with his newly-launched website, which - as well as giving fans to shop his latest label's new offering - also offers an insight into what inspires and interests the man himself, from his most recent photography exhibitions to his favourite sayings and words of wisdom. See his work as guest editor for the Metro and read his guide to the chicest Parisian destinations, including book shops, hotels and fashion boutiques.

When I'm ready, I soak in the bathtub, if you really want to know. My latest uniform is actually two looks—a special jacket with tails made by Dior, but not what you wear for weddings. 16 Facts About Karl Lagerfeld - Fashion.Business.Success. 1. Karl Lagerfeld: King of couture. Karl Lagerfeld doesn’t like to talk about the past. Kendall Jenner poses in Vogue alongside Karl Lagerfeld's cat. Karl Lagerfeld adds a bit of colour to his monochrome look in Saint Tropez. Biography. The People Shaping the Global Fashion Industry. Karl Lagerfeld, Mr Multitasker. As Alexander Wang Exits Balenciaga, Three Potential Successors Emerge. Photo In January, when he was appointed creative director of Gucci, Alessandro Michele was barely known to fashion’s press corps and buying teams, let alone the wider world. Karl Lagerfeld Sets Karl Kids Collection. Karl Lagerfeld Forays Into Kidswear, Unveils Karl Kids Collection.