Degrees of Infinity. Many of us recall the sense of wonder we felt upon learning that there is no biggest number; for some of us, that wonder has never quite gone away. 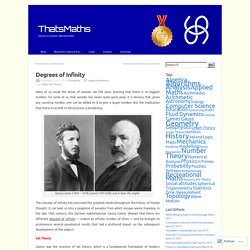 It is obvious that, given any counting number, one can be added to it to give a larger number. But the implication that there is no limit to this process is perplexing. Georg Cantor (1845 – 1918) around 1870 (left) and in later life (right). The concept of infinity has exercised the greatest minds throughout the history of human thought. Strange but True: Infinity Comes in Different Sizes. In the 1995 Pixar film Toy Story, the gung ho space action figure Buzz Lightyear tirelessly incants his catchphrase: "To infinity … and beyond! 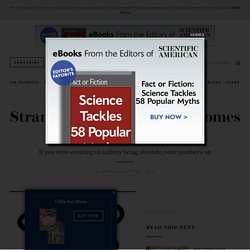 " The joke, of course, is rooted in the perfectly reasonable assumption that infinity is the unsurpassable absolute—that there is no beyond. That assumption, however, is not entirely sound. As German mathematician Georg Cantor demonstrated in the late 19th century, there exists a variety of infinities—and some are simply larger than others. The American government's growth has been severed and we need to take a cue from biology to revive it : C_S_T. Can you represent PI in a finite number of digits in any number system? : askscience. Banach–Tarski paradox. 7. Year 7 (VII) was a common year starting on Saturday (link will display the full calendar) of the Julian calendar. 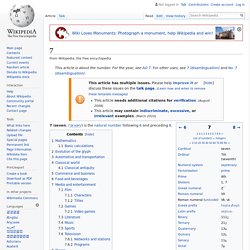 At the time, it was known as the Year of the Consulship of Metellus and Nerva (or, less frequently, year 760 Ab urbe condita). The denomination 7 for this year has been used since the early medieval period, when the Anno Domini calendar era became the prevalent method in Europe for naming years. Events[edit] By place[edit] Roman Empire[edit] Asia[edit] Ralph Abraham. Ralph H. 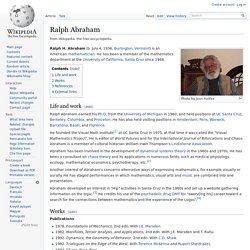 Abraham (b. July 4, 1936, Burlington, Vermont) is an American mathematician. He has been a member of the mathematics department at the University of California, Santa Cruz since 1968. Life and work[edit] Ralph Abraham earned his Ph.D. from the University of Michigan in 1960, and held positions at UC Santa Cruz, Berkeley, Columbia, and Princeton. He founded the Visual Math Institute[1] at UC Santa Cruz in 1975, at that time it was called the "Visual Mathematics Project". 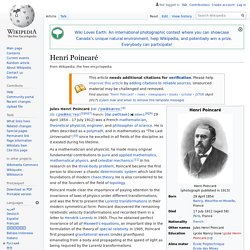 He is often described as a polymath, and in mathematics as The Last Universalist by Eric Temple Bell,[4] since he excelled in all fields of the discipline as it existed during his lifetime. As a mathematician and physicist, he made many original fundamental contributions to pure and applied mathematics, mathematical physics, and celestial mechanics.[5] He was responsible for formulating the Poincaré conjecture, which was one of the most famous unsolved problems in mathematics until it was solved in 2002–2003 by Grigori Perelman.

In his research on the three-body problem, Poincaré became the first person to discover a chaotic deterministic system which laid the foundations of modern chaos theory.

Bell’s math showed that quantum weirdness rang true. First of two parts There’s just enough time left in 2014 to sneak in one more scientific anniversary, and it just might be the most noteworthy of them all. 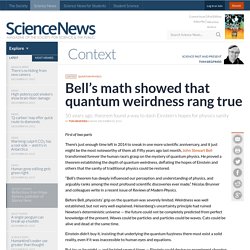 Fifty years ago last month, John Stewart Bell transformed forever the human race’s grasp on the mystery of quantum physics. He proved a theorem establishing the depth of quantum weirdness, deflating the hopes of Einstein and others that the sanity of traditional physics could be restored. “Bell’s theorem has deeply influenced our perception and understanding of physics, and arguably ranks among the most profound scientific discoveries ever made,” Nicolas Brunner and colleagues write in a recent issue of Reviews of Modern Physics.

Before Bell, physicists’ grip on the quantum was severely limited. Einstein didn’t buy it, insisting that underlying the quantum fuzziness there must exist a solid reality, even if it was inaccessible to human eyes and equations. Koch snowflake. The first seven iterations in animation. 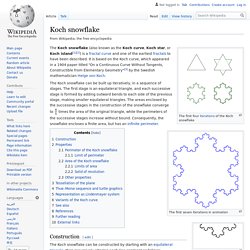 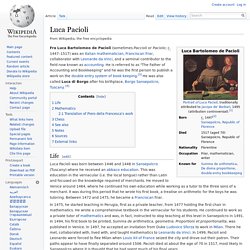 He is referred to as "The Father of Accounting and Bookkeeping" and he was the first person to publish a work on the double-entry system of book-keeping.[3] He was also called Luca di Borgo after his birthplace, Borgo Sansepolcro, Tuscany. [4] Life[edit] Luca Pacioli was born between 1446 and 1448 in Sansepolcro (Tuscany) where he received an abbaco education.

This was education in the vernacular (i.e. the local tongue) rather than Latin and focused on the knowledge required of merchants. Johannes Kepler. Johannes Kepler (German: [ˈkʰɛplɐ]; December 27, 1571 – November 15, 1630) was a German mathematician, astronomer, and astrologer. 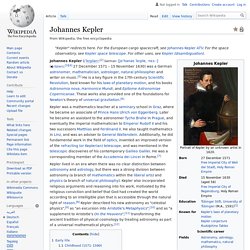 A key figure in the 17th century scientific revolution, he is best known for his laws of planetary motion, based on his works Astronomia nova, Harmonices Mundi, and Epitome of Copernican Astronomy. These works also provided one of the foundations for Isaac Newton's theory of universal gravitation. During his career, Kepler was a mathematics teacher at a seminary school in Graz, Austria, where he became an associate of Prince Hans Ulrich von Eggenberg. Later he became an assistant to astronomer Tycho Brahe, and eventually the imperial mathematician to Emperor Rudolf II and his two successors Matthias and Ferdinand II. Octahedron. In geometry, an octahedron (plural: octahedra) is a polyhedron with eight faces. 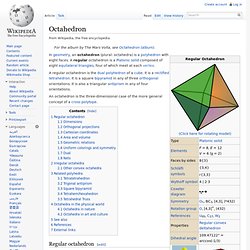 A regular octahedron is a Platonic solid composed of eight equilateral triangles, four of which meet at each vertex. An octahedron is the three-dimensional case of the more general concept of a cross polytope. Regular octahedron[edit] Dimensions[edit] Stellation. In geometry, stellation is the process of extending a polygon (in two dimensions), polyhedron in three dimensions, or, in general, a polytope in n dimensions to form a new figure.

Starting with an original figure, the process extends specific elements such as its edges or face planes, usually in a symmetrical way, until they meet each other again to form the closed boundary of a new figure. The new figure is a stellation of the original. The word stellation comes from the Latin stellātus or stella, which means "star". Kepler's definition[edit] In 1619 Kepler defined stellation for polygons and polyhedra, as the process of extending edges or faces until they meet to form a new polygon or polyhedron. Stellated octahedron. The stellated octahedron, or stella octangula, is the only stellation of the octahedron. It was named by Johannes Kepler in 1609, though it was known to earlier geometers.

Breaking up the indivisible to observe the implausible—particles with a fractional charge. It was 1909 when Robert Millikan and Harvey Fletcher carried out their famous oil drop experiment in which they determined that the smallest unit of charge possible was 1.592x10-19 Coulombs, a value we now refer to as e, the fundamental charge (the modern accepted value is 1.602176565(35)x10-19 C). It is the magnitude of the negative charge carried by the electron, as well as the positive charge of a proton. It is also the smallest unit of charge that any stable, independent particle can possibly have—no particles can have -3/4e charge, nor can they carry +2.8e of charge—barring technicalities. A paper published in this week's edition of Science examines in detail one of the technical loopholes to the preceding statement. Bell’s math showed that quantum weirdness rang true.

Reynolds number. The plume from this candle flame goes from laminar to turbulent. The Reynolds number can be used to predict where this transition will take place. A vortex street around a cylinder. This can occur around cylinders and spheres, for any fluid, cylinder size and fluid speed, provided that the flow has a Reynolds number in the range ~40 to ~1000.[1] Sir George Stokes, introduced Reynolds numbers Osborne Reynolds popularised the concept.

Størmer number. Leucocoprinus birnbaumii, aka Lepiota lutea, the yellow houseplant or house plant soil mushroom, Tom Volk's Fungus of the Month for February 2002, I get *lots* of email about this fungus. In the table below I've put a small sampling of some of these interesting emails. Why is there Fibonacci Sequence in Mandelbrot Set? 7 The Fibonacci Sequence. Mandelbrot set. Initial image of a Mandelbrot set zoom sequence with a continuously colored environment Mandelbrot animation based on a static number of iterations per pixel.

"sacred" geometry. Citizen Maths - Course. The unexpected math behind Van Gogh's "Starry Night" - Natalya St. Clair. A few lesson plans exist for teaching visual arts and self-similarity (objects that have the same pattern) that could be used after showing this lesson. Shodor has some free lesson plans for students in grades 4 through 8. High school students can learn recursion algorithms to create the Koch curve using Scratch for free. Educational technologist Dylan Ryder has also written about creating fractals. A beautiful app worth checking out is Starry Night Interactive App by media artist Petros Vrellis. Download it to your tablet and create your own version of Starry Night.

Gödel numbering. Kurt Gödel. Kurt Friedrich Gödel (/ˈkɜrt ɡɜrdəl/; German: [ˈkʊʁt ˈɡøːdəl] ( ); April 28, 1906 – January 14, 1978) was an Austrian, and later American, logician, mathematician, and philosopher. Considered with Aristotle and Gottlob Frege to be one of the most significant logicians in history, Gödel made an immense impact upon scientific and philosophical thinking in the 20th century, a time when others such as Bertrand Russell,[1] A. Spirasolaris. Fibonacci number. Sacred geometry.

Gödel's incompleteness theorems. What on Earth is a Logarithm?