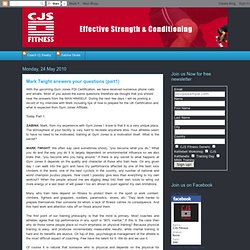 Most of you asked the same questions therefore we thought that you should hear the answers from the MAN HIMSELF. During the next few days I will be posting a record of my interview with Mark including tips of how to prepare for the UK Certification and what is expected from Gym Jones Affiliate. Today Part 1. SABINA: Mark, from my experience with Gym Jones I know is that it is a very unique place. The atmosphere of your facility is very hard to recreate anywhere else. MARK TWIGHT: We often say (and sometimes shout), “you become what you do.”

Many who train here depend on fitness to protect them in the sport or work context: climbers, fighters and grapplers, soldiers, paramedics, skiers, etc. The first point of our training philosophy is that the mind is primary. Twight I. Nothing But Pull-Ups. Gym Jones - Power, Speed, Endurance, Suffering and Salvation. Gym Jones MSFU. Hell on Earth Fitness Plan. Heil gets schooled in the house of pain. 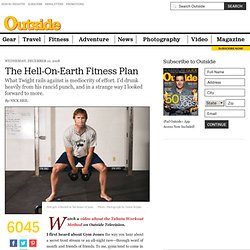 Photo: Photograph by Jamie Kripke Gym Jones: Hell on Earth Fitness Plan Gym Jones creator Mark Twight Watch a video about the Tabata Workout Method on Outside Television. I first heard about Gym Jones the way you hear about a secret trout stream or an all-night rave—through word of mouth and friends of friends. Gym Jones is located in Salt Lake City, where it was created by Mark Twight, a world-class alpinist who chiseled a career on walls of rock and ice so dangerous that, in some instances, he had only about a 50 percent chance of survival.

Like its owner, the gym took on a mystical, slightly nightmarish quality: part martial-arts dojo, part smash lab, part medieval dungeon, all intended to facilitate the arduous process of mental and physical transformation. The routines were said to be so intense, so blindingly debilitating, that they brought even the hardest men to their knees, whimpering in slicks of their own sweat. Ah, yes, the music. CJS Fitness: Effective Strength and Conditioning: GYM JONES - 7 days in Utah. Rob makes sure Jenny Raff hits the target on the airdyne Every time I visit Salt Lake City and train at Gym Jones I appreciate more and more every second I can spend there... and I know I will be coming back for more. 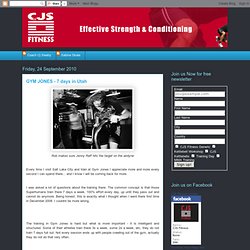 I was asked a lot of questions about the training there. The common concept is that those Superhumans train there 7 days a week, 100% effort every day, up until they pass out and cannot do anymore. Being honest, this is exactly what I thought when I went there first time in December 2008. I couldnt be more wrong. The training in Gym Jones is hard but what is more important - it is intelligent and structured. I think that the most important lesson I have learned from Rob MacDonald this time, is that intelligent training doesnt mean that your athlete (or yourself) has to get dead tired, it means that they have to get BETTER. PS. 10 mins airdyne (15 sec hard/15sec less hard - not easy) 10 mins rest 5 mins airdyne (15/15) faster pace than before 5 mins rest.

Gym Jones - One Piece. The Straight Dope: Gym Jones. At the climbing gym the other night, a friend asked if I knew Mark Twight and sent my to his training facility's page: Gym Jones Twight is famously a completely different in person than in his musings. 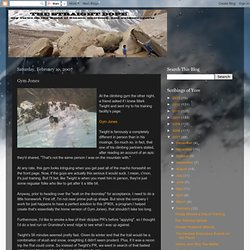 So much so, in fact, that one of his climbing partners stated, after reading an account of an epic they'd shared, "That's not the same person I was on the mountain with. " At any rate, this gym looks intriguing when you get past all of the macho horseshit on the front page. Now, if the guys are actually this serious it would suck. Anyway, prior to heading over the "wait on the doorstep" for acceptance, I need to do a little homework.

Furthermore, I'd like to smoke a few of their diciples PR's before "appying", so I thought I'd do a test run on Grandeur's west ridge to see what I was up against. Twight's 56 minutes seemed pretty fast. The route was gorgeous but a little tendious. Tuco was awesome. On the way home I though about going after Twight's 36.42 on Beachon Hill.