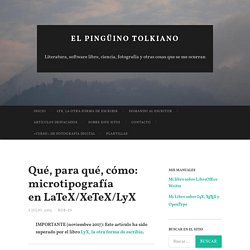 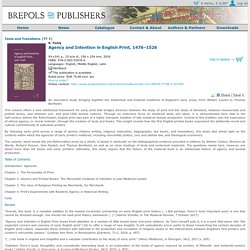 This volume offers a new intellectual framework for early print that bridges divisions between the study of print and the study of literature, between manuscripts and printed books, and between pre- and post-1500 textual cultures. Through an extensive focus on medieval texts and ideas, it is demonstrated here that in the half-century before the Reformation, English print was part of a highly energetic tradition of late medieval textual production. Central to this tradition was the expression of ethical agency, or moral ‘entente’, through the creation of texts and books. This insight reveals how the first English printed books expressed the deliberate moral and cultural commitments of individual printers. Introduction: Agencies Chapter 1. Chapter 2. Chapter 3. Chapter 4. Coda. Nam june paik on technology.

Critical Examination. Qualitative Research Definition and Methods. Qualitative research is a type of social science research that collects and works with non-numerical data and that seeks to interpret meaning from these data that help understand social life through the study of targeted populations or places. 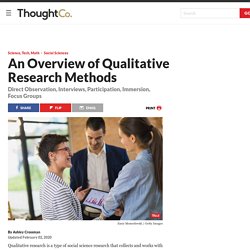 Within sociology, qualitative research is typically focused on the micro-level of social interaction that composes everyday life, whereas quantitative research typically focuses on macro-level trends and phenomena. Key Takeaways. Audiences, relevance, and cognitive environments. LISTSERV. Mailing list software The term Listserv (written by the registered trademark licensee, L-Soft International, Inc., as LISTSERV) has been used to refer to electronic mailing list software applications in general, but is more properly[3] applied to a few early instances of such software, which allows a sender to send one email to the list, and then transparently sends it on to the addresses of the subscribers to the list. 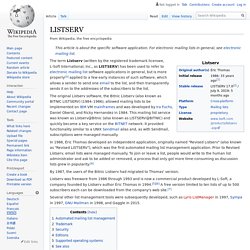 The original Listserv software, the Bitnic Listserv (also known as BITNIC LISTSERV) (1984–1986), allowed mailing lists to be implemented on IBM VM mainframes and was developed by Ira Fuchs, Daniel Oberst, and Ricky Hernandez in 1984. This mailing list service was known as Listserv@Bitnic (also known as LISTSERV@BITNIC) and quickly became a key service on the BITNET network. Mission Statement. Ten Hot Topics around Scholarly Publishing. 2.1. 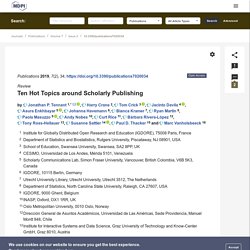 Topic 1: Will preprints get your research ‘scooped’? A ‘preprint’ is typically a version of a research paper that is shared on an online platform prior to, or during, a formal peer review process [6,7,8]. Preprint platforms have become popular in many disciplines due to the increasing drive towards open access publishing and can be publisher- or community-led. A range of discipline-specific or cross-domain platforms now exist [9]. A persistent issue surrounding preprints is the concern that work may be at risk of being plagiarized or ‘scooped’—meaning that the same or similar research will be published by others without proper attribution to the original source—if the original is publicly available without the stamp of approval from peer reviewers and traditional journals [10]. 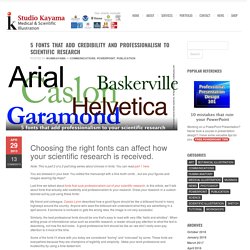 Note: This is part 2 of a 2-part blog series about choices in fonts. You can read part 1 here. You are dressed in your best. You edited the manuscript with a fine-tooth comb…but are your figures and images wearing flip-flops? Last time we talked about fonts that suck professionalism out of your scientific research. My friend and colleague, Cassio Lynm described how a good figure should be like a billboard found in many highways around the country. Similarly, the best professional fonts should be one that’s easy to read with very little “bells and whistles”. Some of the fonts I’ll share with you today are considered “boring” and “overused” by some. 1. 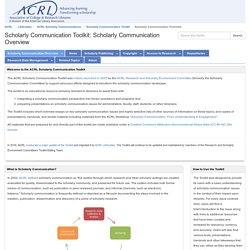 The system includes both formal means of communication, such as publication in peer-reviewed journals, and informal channels, such as electronic listservs. " Scholarly communication is frequently defined or depicted as a lifecycle documenting the steps involved in the creation, publication, dissemination and discovery of a piece of scholarly research. There are several actors or stakeholders present at the various stages in this lifecycle, including researchers, funders, peer reviewers, publishers, and, of course, libraries. Historically, the role of libraries in the scholarly communication lifecycle was confined to information consumer -- they collected and organized scholarly resources for discovery and use by others. Association of Learned and Professional Society Publishers. Academic articles for free at participating local libraries. Scholarly communication. Academic publishing. Academic publishing describes the subfield of publishing which distributes academic research and scholarship. 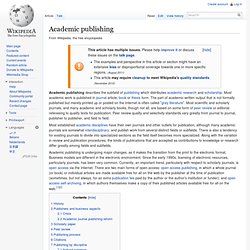 Most academic work is published in journal article, book or thesis form. The part of academic written output that is not formally published but merely printed up or posted on the Internet is often called "grey literature". The Major Branches of Science. The Major Branches of Science Science is a systematic study of the nature and manners of an object and the natural universe that is established around measurement, experiment, observation and formulation of laws. 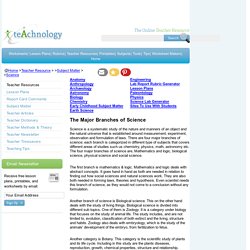 There are four major branches of science; each branch is categorized in different type of subjects that covers different areas of studies such us chemistry, physics, math, astronomy etc. The four major branches of science are, Mathematics and logic, biological science, physical science and social science. The first branch is mathematics & logic. Mathematics and logic deals with abstract concepts. Decodeunicode.org. Dot-font: Being a Typographer. What does it mean to call someone a typographer? 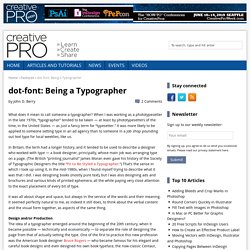 When I was working as a phototypesetter in the late 1970s, “typographer” tended to be taken — at least by phototypesetters of the time, in the United States — as just a fancy term for “typesetter.” It was more likely to be applied to someone setting type in an ad agency than to someone in a job shop pounding out text type for local weeklies, like us. In Britain, the term had a longer history, and it tended to be used to describe a designer who worked with type — a book designer, principally, whose main job was arranging type on a page. (The British “printing journalist” James Moran even gave his history of the Society of Typographic Designers the title “Fit to Be Styled a Typographer.”) That’s the sense in which I took up using it, in the mid-1980s, when I found myself trying to describe what it was that I did.

What Does a Typographer Do? – Graphic Design Degree Hub.