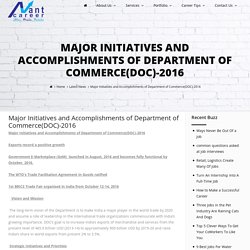 The WTO's Trade Facilitation Agreement in Goods ratified 1st BRICS Trade Fair organised in India from October 12-14, 2016 Vision and Mission The long-term vision of the Department is to make India a major player in the world trade by 2020 and assume a role of leadership in the international trade organizations commensurate with India’s growing importance.

Karnataka quota talk: 100% reservations for blue-collar jobs is ruinous. The Karnataka government's decision to reserve all blue-collar jobs in all industries receiving concessions from the government—except IT and biotech (BT)—for Kannadigas puts it on a slippery slope. 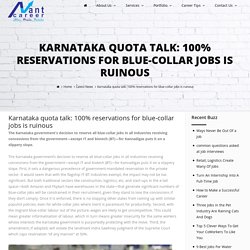 The Karnataka government’s decision to reserve all blue-collar jobs in all industries receiving concessions from the government—except IT and biotech (BT)—for Kannadigas puts it on a slippery slope. First, it sets a dangerous precedence of government-mandated reservation in the private sector. It would seem that with the flagship IT-BT industries exempt, the impact may not be too significant. E-Commerce Logistics Market Detailed Analysis and Forecast by 2024. The imminent explosion of cross-border e-commerce websites will cause a stir in the global e-commerce logistics market, predicts TMR in a new study. 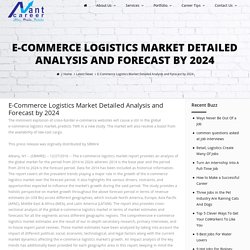 The market will also receive a boost from the availability of low-cost cargo. This press release was orginally distributed by SBWire Albany, NY -- (SBWIRE) -- 12/27/2016 -- The e-commerce logistics market report provides an analysis of the global market for the period from 2014 to 2024, wherein 2014 is the base year and the period from 2016 to 2024 is the forecast period.

Data for 2014 has been included as historical information. Social mobility promises 'broken' for ethnic minority childrens. Black and Asian Muslim children are less likely to get professional jobs, despite doing better at school, according to an official report. 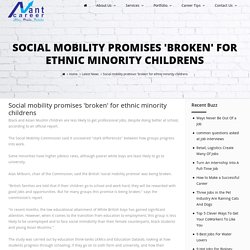 The Social Mobility Commission said it uncovered "stark differences" between how groups progress into work. Some minorities have higher jobless rates, although poorer white boys are least likely to go to university. Alan Milburn, chair of the Commission, said the British 'social mobility promise' was being broken. "British families are told that if their children go to school and work hard, they will be rewarded with good jobs and opportunities. But for many groups this promise is being broken," says the commission's report.

"In recent months, the low educational attainment of White British boys has gained significant attention. The study was carried out by education think-tanks LKMco and Education Datalab, looking at how students progress through schooling, if they go on to sixth form and university, and how their achievements translate into jobs. Usage of technology and improved mobility helps e-commerce grow. Staying and ideating together, the start-up way. A young and successful Kerala-based entrepreneur is leading by example and piloting an ‘impact sourcing’ project in the State. 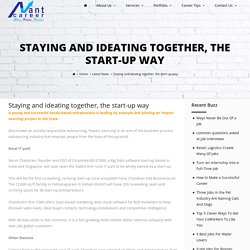 Also known as socially responsible outsourcing, ‘impact sourcing’ is an arm of the business process outsourcing industry that employs people from the base of the pyramid. Rural IT park. Ecommerce company alibaba to soon lunch its first branch in mumbai,india. Kotak Mahindra Bank, IDFC Bank and Aditya Birla Finance are the company's new partners in India Alibaba, largest e-commerce entity in China, is setting up its first India office in Mumbai, apparently an indication that it would step up investment in the country in the coming year, to capture a pie of the growing e-commerce market here. 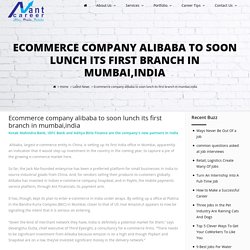 So far, the Jack Ma-founded enterprise has been a preferred platform for small businesses in India to source industrial goods from China. And, for vendors selling their products to customers globally. Alibaba has invested in Indian e-commerce company Snapdeal, and in Paytm, the mobile payments service platform, through Ant Financials, its payment arm. Vodafone bets on enterprise business to drive growth. Vodafone is in talks with a state election commission to provide customised communication services, including a monitoring system that would allow the election commissioner to see as many as 22,000 polling booths at one shot, as India’s second largest telco bets on its enterprise business to drive growth. 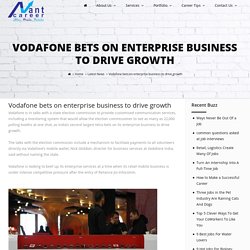 The talks with the election commission include a mechanism to facilitate payments to all volunteers directly via Vodafone’s mobile wallet, Nick Gliddon, director for business services at Vodafone India, said without naming the state. Best small ecommarce business resolutions in new years. The beginning of the new year is a great time for the owners of small ecommerce businesses to take stock and note all they have accomplished the past 12 months. 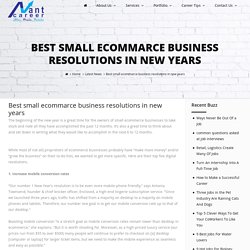 It’s also a great time to think about and set down in writing what they would like to accomplish in the next 6 to 12 months. While most (if not all) proprietors of ecommerce businesses probably have “make more money” and/or “grow the business” on their to-do lists, we wanted to get more specific. Here are their top five digital resolutions. 1. Increase mobile conversion rates “Our number 1 New Year's resolution is to be even more mobile-phone friendly,” says Antonia Townsend, founder & chief knicker officer, Enclosed, a high-end lingerie subscription service. Boosting mobile conversion “is a stretch goal as mobile conversion rates remain lower than desktop in ecommerce,” she explains. 2. The beginning of the New Year is the perfect time to review your email marketing strategy – and purge and segment your email marketing lists. 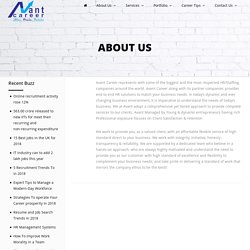 Avant Career along with its partner companies provides end to end HR solutions to match your business needs. In today’s dynamic and ever changing business environment, it is imperative to understand the needs of today’s business. We at Avant adopt a comprehensive yet tiered approach to provide complete services to our clients. Avant Managed by Young & dynamic entrepreneurs having rich Professional exposure focuses on Client Satisfaction & retention We work to provide you, as a valued client, with an affordable flexible service of high standard direct to your business. HR Solutions in Delhi, office executive jobs India, Indian Staffing company.