Amazon.co. This worksheet has a free sample available. 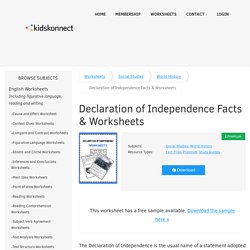 Download the sample here » Download This Sample This sample is exclusively for KidsKonnect Basic members! To download this worksheet, click the button below to signup for free (it only takes a minute) and you'll be brought right back to this page to start the download! Sign Up Already a member? The Declaration of Independence is the usual name of a statement adopted by the Continental Congress on July 4, 1776, which announced that the thirteen American colonies, then at war with Great Britain, regarded themselves as thirteen newly independent sovereign states, and no longer a part of the British Empire.

The colonists were frustrated with King George and Great Britain. Declaration of Independence Worksheets Throughout the extensive worksheet pack there are multiple lesson resources and quizzes for students to practice their knowledge which can be used within the classroom or homeschooling environment. Five Writers Writing tasks. Book: My Brother Sam is Dead. Magic Tree House #22: Revolutionary: Amazon.co.uk: Mary Pope Osborne, Sal Murdocca: 9780679890683: Books. The American Revolutionary War: Keeping Independence Part 1: The American Independent Spirit. 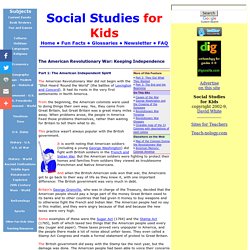 It had its roots in the very first settlements in North America. From the beginning, the American colonists were used to doing things their own way. Yes, they came from Great Britain, but Great Britain was a great many miles away. This practice wasn't always popular with the British government. It is worth noting that American soldiers (including a young George Washington) did fight with British soldiers in the French and Indian War.

And when the British-American side won that war, the Americans got to go back to their way of life as they knew it, with one important difference: The British government was very much in debt. The British government did away with the Stamp tax the next year, but the damage was done. Boston was a hotbed of revolutionary feelings already. LIBERTY! . Chronicle of the Revolution. Liberty or Death: The American Revolution: 1763-1783 (American Story (Hardcover)): Amazon.co.uk: Betsy Maestro, Giulio Maestro joi: 9780688088026: Books. Liberty!: How the Revolutionary War Began (Landmark Books): Lucille Recht Penner, David Wenzel: 9780375822001: Amazon.com: Books. Liberty's Kids - The Complete Series: Walter Cronkite, Billy Crystal, Dustin Hoffman, Michael Douglas, Whoopi Goldberg, Sylvester Stallone, Arnold Schwarzenegger, Annette Benning, Various: Movies & TV.

Preparing For The Oath: U.S. History And Civics For Citizenship. Colonial America for Kids: The Thirteen Colonies. History >> Colonial America The United States was formed from thirteen British colonies in 1776. 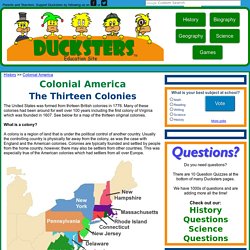 Many of these colonies had been around for well over 100 years including the first colony of Virginia which was founded in 1607. See below for a map of the thirteen original colonies. What is a colony? A colony is a region of land that is under the political control of another country. Usually the controlling country is physically far away from the colony, as was the case with England and the American colonies. The Thirteen Colonies Here is a list of the thirteen colonies with the year they were founded in () and a note on how they were founded. Virginia (1607) - John Smith and the London Company. Queen Elizabeth wanted to establish colonies in the Americas in order to grow the British Empire and to counter the Spanish. Each colony, however, has its own unique history on how it was founded.