Kim Peek - The Real Rain Man [Full Film] Daniel Tammet: Different ways of knowing. Savant syndrome. When Brain Damage Unlocks The Genius Within. Derek Amato stood above the shallow end of the swimming pool and called for his buddy in the Jacuzzi to toss him the football. 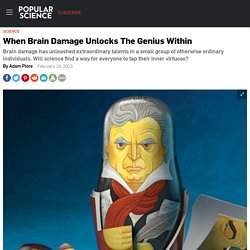 Then he launched himself through the air, head first, arms outstretched. He figured he could roll onto one shoulder as he snagged the ball, then slide across the water. It was a grave miscalculation. The tips of Amato's fingers brushed the pigskin—then his head slammed into the pool's concrete floor with such bone-jarring force that it felt like an explosion. He pushed to the surface, clapping his hands to his head, convinced that the water streaming down his cheeks was blood gushing from his ears. At the edge of the pool, Amato collapsed into the arms of his friends, Bill Peterson and Rick Sturm. It would be weeks before the full impact of Amato's head trauma became apparent: 35 percent hearing loss in one ear, headaches, memory loss. Without thinking, he rose from his chair and sat in front of it. 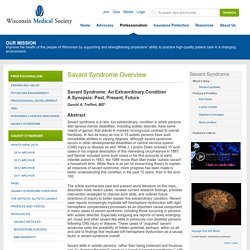 Treffert, MD* Abstract. The savant syndrome: an extraordinary condition. A synopsis: past, present, future. 10 Fascinating People With Savant Syndrome. Humans Despite being one of the most fascinating conditions of the human mind, we still don’t know much about savant syndrome: a condition where a person displays an incredible gift in one specific area of intelligence, yet suffers from an often severe handicap in other areas. 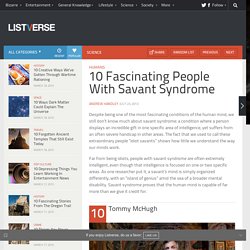 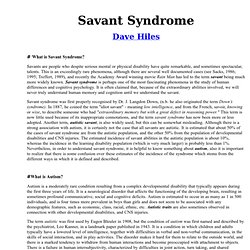 Savants are people who despite serious mental or physical disability have quite remarkable, and sometimes spectacular, talents. This is an exceedingly rare phenomena, although there are several well documented cases (see Sacks, 1986; 1995; Treffert, 1989), and recently the Academy Award winning movie Rain Man has led to the term savant being much more widely known. Savant syndrome is perhaps one of the most fascinating phenomena in the study of human differences and cognitive psychology. Savant syndrome was first properly recognised by Dr. #What is Autism? Autism is a moderately rare condition resulting from a complex developmental disability that typically appears during the first three years of life. Rain Man. The film won four Oscars at the 61st Academy Awards (March 1989), including Best Picture, Best Original Screenplay, Best Director, and Best Actor in a Leading Role for Hoffman. 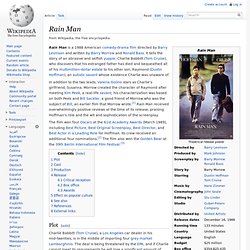 Its crew received an additional four nominations.[2] The film also won the Golden Bear at the 39th Berlin International Film Festival.[3] Plot[edit] Charlie Babbitt (Tom Cruise), a Los Angeles car dealer in his mid-twenties, is in the middle of importing four grey market Lamborghinis. The deal is being threatened by the EPA, and if Charlie cannot meet its requirements he will lose a significant amount of money. Ideasthesia. Example of associations between graphemes and colors that are described more accurately as ideasthesia than as synesthesia Examples and evidence[edit] A common example of ideasthesia is the association between graphemes and colors, usually referred to as grapheme-color synesthesia. 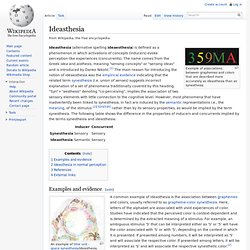 Here, letters of the alphabet are associated with vivid experiences of color. Studies have indicated that the perceived color is context-dependent and is determined by the extracted meaning of a stimulus. For example, an ambiguous stimulus '5' that can be interpreted either as 'S' or '5' will have the color associated with 'S' or with '5', depending on the context in which it is presented.

Evidence for grapheme-color ideasthesia comes also from the finding that colors can be flexibly associated to graphemes, as new meanings become assigned to those graphemes. In another study, synesthetes were prompted to form novel synesthetic associations to graphemes never seen before. Asperger syndrome. Asperger syndrome (AS), also known as Asperger disorder (AD) or simply Asperger's, is an autism spectrum disorder (ASD) that is characterized by significant difficulties in social interaction and nonverbal communication, alongside restricted and repetitive patterns of behavior and interests. 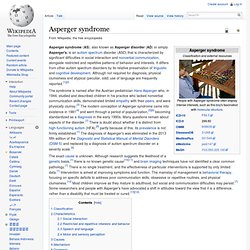 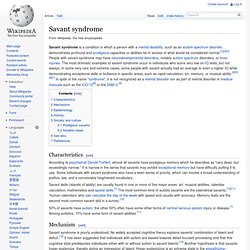 The most dramatic examples of savant syndrome occur in individuals who score very low on IQ tests, but not always. In some very rare and extreme cases, some people with savant actually had an average to even a higher IQ while demonstrating exceptional skills or brilliance in specific areas, such as rapid calculation, art, memory, or musical ability.[4][5][6][7] In spite of the name "syndrome", it is not recognized as a mental disorder nor as part of mental disorder in medical manuals such as the ICD-10[8] or the DSM-V.[9] Characteristics[edit] Mechanism[edit]