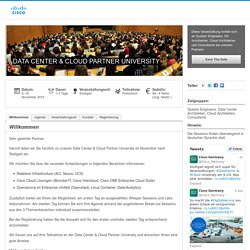 Data retention: we need this Opposition to oppose. Opinion Posted Instead of stepping up as a party of opposition, Labor has thrown Tony Abbott a mass surveillance lifeline and indicated it will support his attack on our freedoms, writes Scott Ludlam. 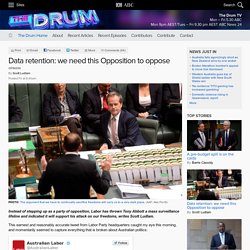 This earnest and reasonably accurate tweet from Labor Party headquarters caught my eye this morning, and momentarily seemed to capture everything that is broken about Australian politics: The worst Prime Minister in Australian history, mortally damaged from a series of self-inflicted political disasters, gropes towards the only thing he thinks can save him: fear. To terrify the Australian people into putting up with him until the 2016 election. To this end, he is clutching at laws to force Australian telecommunications providers to entrench passive electronic surveillance across everyone in the country: a two-year mandatory data retention regime. You saw this coming, didn't you: Labor proposes to cave in. GitHut - Programming Languages and GitHub. The EU data protection regulation after 3 years of negotiation. By Jean de Ruyt and Sebastian Vos. 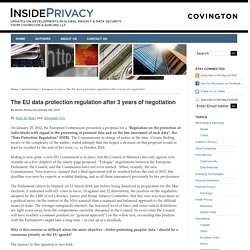 Sid_analysts_can_now_unminimize_uk_phone_data. World's Biggest Data Breaches & Hacks. Witter / ? 30 amazing data viz galleries everyone should follow. Not so long ago, we brought to you a set of Pinterest users to follow, as an example of the kind of curating efforts many people are making in social network websites such as that one. 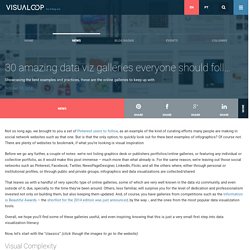 But is that the only option, to quickly look out for thew best examples of infographics? Of course not. There are plenty of websites to bookmark, if what you’re looking is visual inspiration Before we go any further, a couple of notes: we’re not listing graphics desk or publishers portfolios/online galleries, or featuring any individual or collective portfolio, as it would make this post immense – much more than what already is. For the same reason, we’re leaving out those social networks such as Pinterest, Facebook, Twitter, NewsPageDesigner, LinkedIn, Flickr, and all the others where, either through personal or institutional profiles, or through public and private groups, infographics and data visualizations are collected/shared. 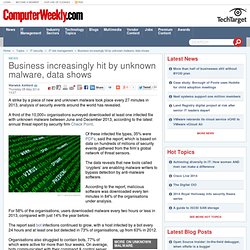 A third of the 10,000+ organisations surveyed downloaded at least one infected file with unknown malware between June and December 2013, according to the latest annual threat report by security firm Check Point. Getty Images/Hemera Of these infected file types, 35% were PDFs, said the report, which is based on data on hundreds of millions of security events gathered from the firm’s global network of threat sensors. The data reveals that new tools called ‘crypters’ are enabling malware writers to bypass detection by anti-malware software.

According to the report, malicious software was downloaded every ten minutes in 84% of the organisations under analysis. For 58% of the organisations, users downloaded malware every two hours or less in 2013, compared with just 14% the year before. Email Alerts. Open source diagramming framework for Java. Ein Doku-Spiel im Herzen der Erdölindustrie: Fort McMoney – Die Stadt mit zwei Gesichtern - Data Nachrichten. Practical-tools-hadley-wickham.pdf. NSA Surveillance: First Prism, Now Muscled Out Of Cloud. Companies can no longer discount the risk of losing control of confidential corporate data in the cloud. 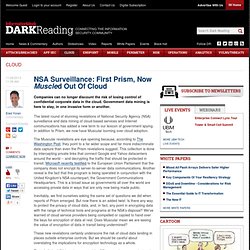 Government data mining is here to stay, in one invasive form or another. The latest round of stunning revelations of National Security Agency (NSA) surveillance and data mining of cloud-based services and Internet communications has added a new term to our lexicon of government spying. In addition to Prism, we now have Muscular looming over cloud adoption. The Muscular revelations are eye opening because, according to The Washington Post, they point to a far wider scope and far more indiscriminate data capture than even the Prism revelations suggest. This collection is done by intercepting private links that connect Google and Yahoo datacenters around the world -- and decrypting the traffic that should be protected in transit.

T. Hunk: Raw data to analytics in < 60 minutes. Update: now with UI setup instructions Finally, I got a bit of down time to sit down and get to the third part of the “Hunk: Splunk Analytics for Hadoop Intro” series of blogs, a follow up to part 1 and part 2 Summary of what we’ll do 1. 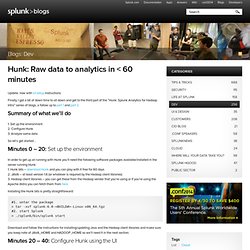 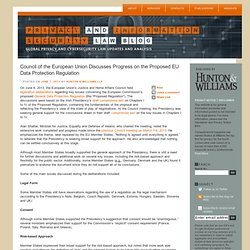 The discussions were based on the Irish Presidency’s draft compromise text on Chapters I to IV of the Proposed Regulation, containing the fundamentals of the proposal and reflecting the Presidency’s view of the state of play of negotiations. At the Council meeting, the Presidency was seeking general support for the conclusions drawn in their draft compromise text on the key issues in Chapters I to IV. NSA spying scandal fallout: Expect big impact in Europe and elsewhere (Updated) UPDATE: I’ll admit I am shocked to have received this response from the European Commission to my request for comment, with particular regard to the impact on EU citizens’ privacy: “We do not have any comments. This is an internal U.S. matter.” For the reason behind my surprise, read on… This is a great day to be a conspiracy theorist. Vindication! Data, Data, Data: Thousands of Public Data Sources.

We love data, big and small and we are always on the lookout for interesting datasets. 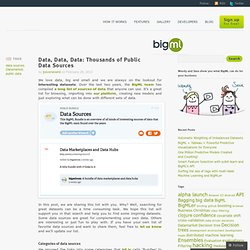 Over the last two years, the BigML team has compiled a long list of sources of data that anyone can use. It’s a great list for browsing, importing into our platform, creating new models and just exploring what can be done with different sets of data. In this post, we are sharing this list with you. Why? Well, searching for great datasets can be a time consuming task. Categories of data sources We grouped the links into some categories that bit.ly calls ‘Bundles’ to help you find what you are looking for and bundled the Bundles into a single Data Sources Bundle.

A Map of Muslim Protests Around the World - Global. The Best Data Visualization Projects of 2011. I almost didn't make a best-of list this year, but as I clicked through the year's post, it was hard not to. 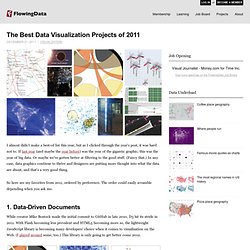 If last year (and maybe the year before) was the year of the gigantic graphic, this was the year of big data. Or maybe we've gotten better at filtering to the good stuff. (Fancy that.) In any case, data graphics continue to thrive and designers are putting more thought into what the data are about, and that's a very good thing.