The Self Care Corner: Create Your "Calm Down Kit" Stigma, discrimination against mentally ill are common. A separate and unequal system People with mental illness face legal discrimination Stigma against the mentally ill is so powerful that it's been codified for 50 years into federal law, and few outside the mental health system even realize it. 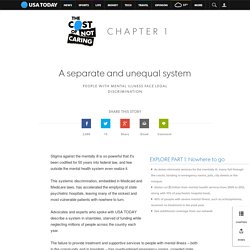 This systemic discrimination, embedded in Medicaid and Medicare laws, has accelerated the emptying of state psychiatric hospitals, leaving many of the sickest and most vulnerable patients with nowhere to turn. Advocates and experts who spoke with USA TODAY describe a system in shambles, starved of funding while neglecting millions of people across the country each year. The failure to provide treatment and supportive services to people with mental illness – both in the community and in hospitals – has overburdened emergency rooms, crowded state and local jails and left untreated patients to fend for themselves on city streets, says Patrick Kennedy, a former congressman from Rhode Island who has fought to provide better care for the mentally ill. It’s Critical to Be an Advocate for Those with Mental Illness.

There has been so much in the news recently about the lack of decent care that people are getting in psychiatric facilities. 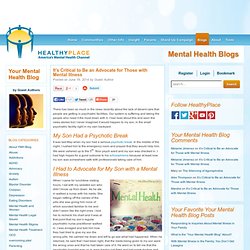 Our system is suffering and taking the people who need it the most down with it. I had read about this and seen the news stories but I never imagined it would happen to my son, in the small psychiatric facility right in my own backyard. My Son Had a Psychotic Break It was last May when my son had a serious psychotic break. Putting the GO in GOALS. By Sharon Anne Waldrop An internal battery that’s hard to boost is part of living with depression, but our 5-step program gives you strategies for overcoming inertia. 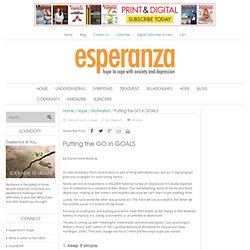 Ninety percent of respondents in the 2009 National Survey on Depression in Canada reported lack of motivation as a symptom of their illness. That overwhelming sense of inertia also feeds depression, making us feel useless and hopeless because we can’t seem to get anything done. Luckily, the cycle works the other way around, too. The more we can accomplish, the better we feel and the easier it is to fend off low mood. Focusing on small goals and pushing yourself to meet them builds up the charge in that depleted battery.

Make a pledge to end mental health stigma and discrimination. A-Z Mental health. Where Our Pain Hides. Top 5 Dangers Of Being A Perfectionist. Whether you can’t tolerate your own faults or others’, demanding perfection can poison your life. 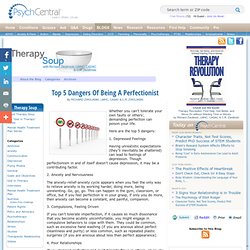 Here are the top 5 dangers: 1. Depressed Feelings Having unrealistic expectations (they’ll inevitably be shattered) can lead to feelings of depression. Though perfectionism in and of itself doesn’t cause depression, it may be a contributing factor. The Five Stages of Grief After a Diagnosis of Mental Illness. In the eight years that I’ve lived with schizophrenia, I’ve seen good days and horrible days, I’ve had successes and I’ve had failures. 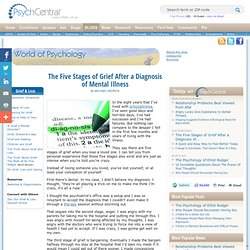 But nothing can compare to the despair I felt in the first few months and years of living with the illness. They say there are five stages of grief when you lose a loved one. I can tell you from personal experience that those five stages also exist and are just as intense when you’re told you’re crazy. Instead of losing someone you loved, you’ve lost yourself, or at least your conception of yourself. Anger causes violence: Treat it rather than mental illness to stop mass murder. Photo by Puerto Rico National Guard via Reuters In the 1980s, around the time of the massive deinstitutionalization of the mentally ill, I was working toward my degree in clinical psychology by training at a psychiatric hospital in Washington, D.C. 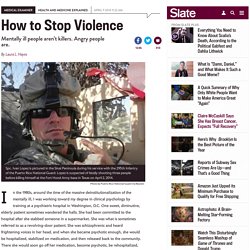 One sweet, diminutive, elderly patient sometimes wandered the halls. Glossary of Psychological Terms. Self-Care For Higher Self-Esteem. One of the most important things you can do for mind and body is take a break once in a while. 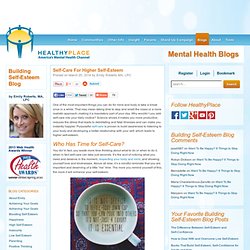 That may mean taking time to stop and smell the roses or a more realistic approach–making it a mandatory part of your day. Why wouldn’t you add self-care into your daily routine? Science shows it makes you more productive, reduces the stress that leads to debilitating and fatal illnesses and can make you instantly happier. Purposeful self-care is proven to build awareness to listening to your body and developing a better relationship with your self, which leads to higher self-esteem.

Screw stigma. I’m coming out. — Journalism, Deliberated. Admitting that I was not well—and was getting treatment—transformed my life, which I realize now, looking back, was headed down a very lonely and scary path. 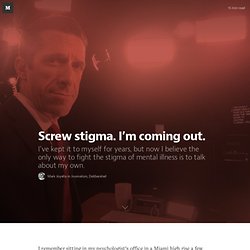 I kept waiting and waiting for my real life to begin, without making any progress to getting the things that I wanted. Sitting in a psychiatrist’s office one day in 2008, a wonderful but steely tough doctor gave it to me straight. Recovering isn't that easy..... I Am Not Crazy - A New Approach to Mental Health Awareness. Being Stuck in a Rut Can Harm Your Self-Esteem. So you’ve been stuck in a funk, lost the momentum or are feeling less than jazzed about your life. 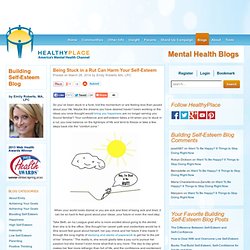 Maybe the dreams you have desired haven’t been working or the ideas you once thought would bring you happiness are no longer serving you. Sound familiar? Your confidence and self-esteem takes a hit when you’re stuck in a rut; you lose balance on the tightrope of life and tend to freeze or take a few steps back into the “comfort zone.” When your world looks dismal or you are sick and tired of being sick and tired, it can be so hard to feel good about your ideas, your future or even the next step. 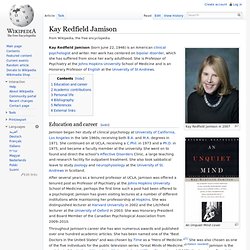 Many people just aren’t neighbors anymore in the classic sense of the word. Oh sure, we’ll wave across the fence, but that’s pretty much it. Angela Gambrel, Author of the Surviving Mental Health Stigma Blog. Online Bipolar Support Groups. HealthyPlace.com - Trusted Mental Health Information and Support - HealthyPlace. Mental health stigma: where's my cheesecake? I once had a friend who was almost suffocated by cheesecake. She was a nice woman – let's call her Penny. I met her in a hospital, as you do. Penny was undergoing treatment for breast cancer, and let's just say she was a little bit pissed off with it. Not the breast cancer, but the way she had become "Poor Penny with Breast Cancer How Tragic She's Only 38, You Know". MoodGYM: Welcome. Living Life To The Full. Lift your mood with a little help from your friends.

To Look into Further

Hypervigilance in Anxiety - Symptoms. 7 Things Anxiety Sufferers Would Like their Family and Friends to Know. Gpcare.org. Cognitive behavioural therapy (CBT) is well established as an effective treatment for a range of disorders (e.g., anxiety, affective disorders) (see Nathan & Gorman, 1998). As the name suggests, CBT utilises a combination of behavioural and cognitive techniques to target a patient's symptoms. The focus is on teaching patient's how to control their symptoms, correct faulty thinking patterns and manage their own disorder. Ideally, at the end of treatment, patients should be able to use the strategies they have been taught to deal with any future problems and possible return of symptoms. The content of CBT should be determined according to need and the duration should be time limited. There are a number of studies demonstrating that CBT is effective for a variety of disorders (e.g., depression, anxiety, schizophrenia, eating disorders) (see Enright, 1997 for a review).

Www.cci.health.wa.gov.au/docs/ACFB02A.pdf. Cognitive Behavioural Therapy (CBT) Worksheets Free Download. Bipolar and Anger. By Stephen Propst [full article] Www.getselfhelp.co.uk/docs/BipolarMoodManagement.pdf. Bring Your Life Into Balance: A free self-guided program for becoming a healthier, happier you. We often hear from people who feel overwhelmed by stress, family, work and relationship problems, health challenges, and painful emotions. They’ve tried many approaches to help themselves feel better, but they just can’t seem to follow through, or what they’ve done hasn't helped them enough.