Optima Genesis. Statistical Data and the Education Debate Part 1: Effect and Cause. There is a lot of debate over what counts as evidence in education and I have barely begun to read up on the topic, but there are a few errors that I keep seeing made again and again in the use of statistics in educational debate that need to be emphasised. 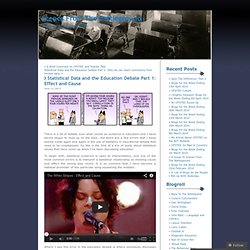 So this is the first of a trio of posts about statistical issues that have come up when I’ve been discussing education. To begin with, statistical evidence is open to interpretation, and one of the most common errors is to interpret a statistical relationship as showing cause and effect the wrong way round. It is so common that I have become a habitual promoter of this particular song explaining the mistake. Where I see this error in the education debate is where somebody dismisses an obvious reaction (R) to a problem (P) by saying “P happens where R happens, therefore R causes P”. So we have: Schools which exclude a lot of pupils have more behaviour problems. I could go on. Like this: Like Loading... Statistical Data and the Education Debate Part 2: Why we can reach conclusions from limited data.

I have brought this post forward as I have just seen a number of people react to this OFSTED report by making some of the errors described here. 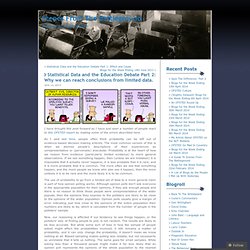 As I said last time, people often think probability can be left out of evidence-based decision making entirely. The most common version of this is when we dismiss people’s descriptions of their experiences as unrepresentative or (perversely) anecdotal. Probability is at the heart of how we reason from evidence (particularly limited evidence) to more general observations. If we see something happen, then (unless we are mistaken) it is impossible that it actually never happens, it is less probable that it is rare, and it is more probable that it is common. 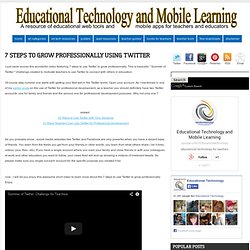 This is basically " Summer of Twitter " challenge created to motivate teachers to use Twitter to connect with others in education. Of course step number one starts with getting your feet wet in the Twitter world: Open your account. As I mentioned in one of my earlier posts on the use of Twitter for professional development, as a teacher you should definitely have two Twitter accounts: one for family and friends and the second one for professional development purposes. Why not only one ? Related : As you probably know , social media websites like Twitter and Facebook are only powerful when you have a decent base of friends. New Challenge? Advice for getting that job.

Career Progression: More of a winding road than a ladder. 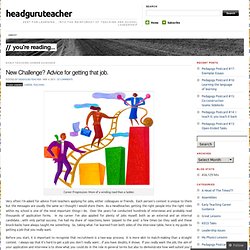 Very often I’m asked for advice from teachers applying for jobs, either colleagues or friends. Each person’s context is unique to them but the messages are usually the same so I thought I would share them. As a Headteacher, getting the right people into the right roles within my school is one of the most important things I do. Over the years I’ve conducted hundreds of interviews and probably read thousands of application forms. In my career I’ve also applied for plenty of jobs myself, both as an external and an internal candidate…with only partial success. Before you start, it is important to recognise that recruitment is a two-way process; it is more akin to match-making than a straight contest.

My ideal candidate looks something like this: They understand teaching and learning and talk about it with knowledge and passion. They have leadership capacity or potential... How do you stand out from the crowd? Before you apply Interviews.