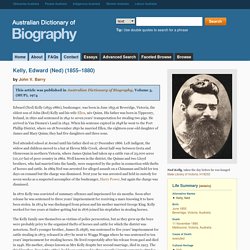 His father was born in Tipperary, Ireland, in 1820 and sentenced in 1841 to seven years' transportation for stealing two pigs. He arrived in Van Diemen's Land in 1842. When his sentence expired in 1848 he went to the Port Phillip District, where on 18 November 1850 he married Ellen, the eighteen-year-old daughter of James and Mary Quinn; they had five daughters and three sons. Ned attended school at Avenel until his father died on 27 December 1866. Ned Kelly. Edward "Ned" Kelly (December 1854[1] – 11 November 1880) was an Australian bushranger of Irish descent. 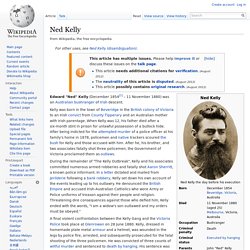 Kelly was born in the town of Beveridge in the British colony of Victoria to an Irish convict from County Tipperary and an Australian mother with Irish parentage. When Kelly was 12, his father died after a six-month stint in prison for unlawful possession of a bullock hide. After being indicted for the attempted murder of a police officer at his family's home in 1878, policemen and native trackers scoured the bush for Kelly and those accused with him. After he, his brother, and two associates fatally shot three policemen, the Government of Victoria proclaimed them as outlaws. During the remainder of "The Kelly Outbreak", Kelly and his associates committed numerous armed robberies and fatally shot Aaron Sherritt, a known police informant. A final violent confrontation between the Kelly Gang and the Victoria Police took place at Glenrowan on 28 June 1880. Family background and early life. Category:Bushrangers. 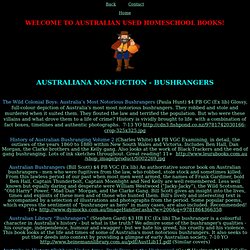 They robbed and stole and murdered when it suited them. They flouted the law and terrified the population. But who were these villains and what drove them to a life of crime? History of Australian Bushranging Volume 2 (Charles White) $4 PB VGC Examining, in detail, the outlaws of the years 1860 to 1880 within New South Wales and Victoria. Edward Davis (bushranger) Edward Davis (1816–1841) was an Australia convict turned bushranger. 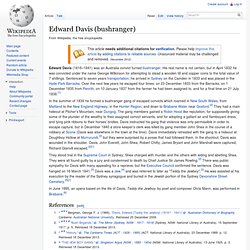 His real name is not certain, but in April 1832 he was convicted under the name George Wilkinson for attempting to stead a wooden till and copper coins to the total value of 7 shillings. Sentenced to seven years transportation, he arrived in Sydney on the Camden in 1833 and was placed in the Hyde Park Barracks. Over the next few years he escaped four times: on 23 December 1833 from the Barracks, on 1 December 1835 from Penrith, on 10 January 1837 from the farmer he had been assigned to, and for a final time on 21 July 1838.[1] In the summer of 1839 he formed a bushranger gang of escaped convicts which roamed in New South Wales, from Maitland to the New England Highway, in the Hunter Region, and down to Brisbane Water near Gosford.[2] They had a main hideout at Pilcher's Mountain, near Dungog.

Edward Davis (bushranger) Edward Davis. Edward Davis (1816-1841), Jewish convict and bushranger, is said to have been born at Gravesend, England, but this is not certain and it is doubtful that his name was Davis. 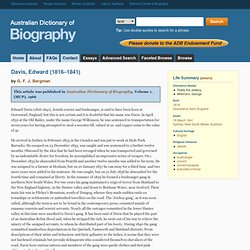 In April 1832 at the Old Bailey, under the name George Wilkinson, he was sentenced to transportation for seven years for having attempted to steal a wooden till, valued at 2s. and copper coins to the value of 5s. The Bushranger Act. By 1830 there were so many bushrangers roaming around New South Wales that the government passed a special Act to make it easier to catch people who might be bush- rangers. 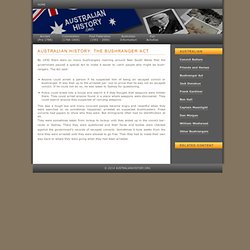 The Act said: Anyone could arrest a person if he suspected him of being an escaped convict or bushranger. It was then up to the arrested per- son to prove that he was not an escaped convict. If he could not do so, he was taken to Sydney for questioning. Police could break into a house and search it if they thought that weapons were hidden there. This was a tough law and many innocent people became angry and resentful when they were searched or, as sometimes happened, arrested as suspected bushmasters. They were sometimes taken from lockup to lockup until they ended up in the convict bar- racks in Sydney. The Jew Boy Gang- Hunter Valley Bushrangers. Death of an old identity - The other day there died in the Scone Hospital, at the ripe age of 85 years, a man with a history, as far as his past is concerned. 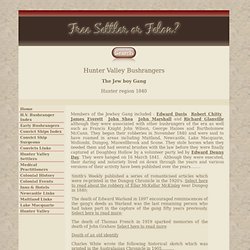 The name Warland at once strikes one as being familiar, for who does not know Warland's Range? The deceased, Edward Warland, first came to Turanville in 1838, fifty either years ago and was a brother of the late W. H. Warland, who came to the colony a few years earlier. The latter was the owner of Harben Vale.