American Lung Association. The Respiratory System Your lungs are part of the respiratory system, a group of organs and tissues that work together to help you breathe. 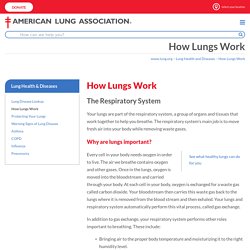 The respiratory system's main job is to move fresh air into your body while removing waste gases. Why are lungs important? Every cell in your body needs oxygen in order to live. The air we breathe contains oxygen and other gases. Respiratory Cells. Lungs and Respiratory System. Listen What They Do The two openings of the airway (the nasal cavity and the mouth) meet at the pharynx (pronounced: FAR-inks), or throat, at the back of the nose and mouth. 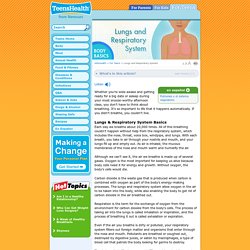 The pharynx is part of the digestive system as well as the respiratory system because it carries both food and air. At the bottom of the pharynx, the pathway for both food and air divides in two. One passageway is for food (the esophagus, pronounced: ih-SAH-fuh-gus, which leads to the stomach) and the other for air. ASU - Ask A Biologist. Back to comic Where are epithelial cells? 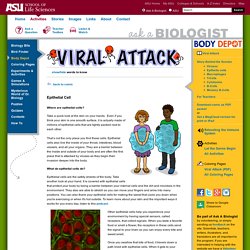 Take a quick look at the skin on your hands. Untitled. Respiratory System: Facts, Function and Diseases. The human respiratory system is a series of organs responsible for taking in oxygen and expelling carbon dioxide. 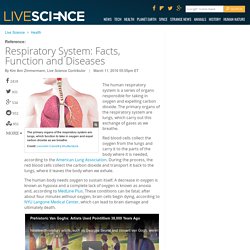 The primary organs of the respiratory system are lungs, which carry out this exchange of gases as we breathe. Red blood cells collect the oxygen from the lungs and carry it to the parts of the body where it is needed, according to the American Lung Association. During the process, the red blood cells collect the carbon dioxide and transport it back to the lungs, where it leaves the body when we exhale. The human body needs oxygen to sustain itself. A decrease in oxygen is known as hypoxia and a complete lack of oxygen is known as anoxia and, according to MedLine Plus. Untitled.