Animal Treatment in Zoos and Aquariums 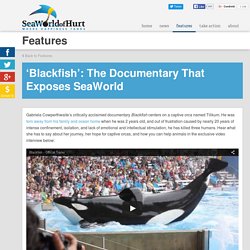 He was torn away from his family and ocean home when he was 2 years old, and out of frustration caused by nearly 20 years of intense confinement, isolation, and lack of emotional and intellectual stimulation, he has killed three humans. Hear what she has to say about her journey, her hope for captive orcas, and how you can help animals in the exclusive video interview below: In her documentary, Cowperthwaite pieces together Tilikum’s story with shocking film footage, expert testimonies, and heartbreaking interviews with the people who know Tilikum better than anyone: his former trainers. 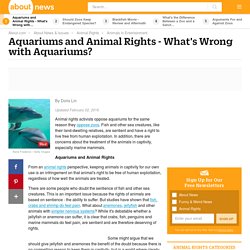 Animal rights activists oppose aquariums for the same reason they oppose zoos. Fish and other sea creatures, like their land-dwelling relatives, are sentient and have a right to live free from human exploitation. Sinful treatment of animals - Review of Zoo Aquarium de ... CAPS - Conservation claims of Sea Life centres don’t stand up to scrutiny. Since early last year, CAPS has worked alongside local groups to oppose plans to open a new Sea Life aquarium in the busy Trafford Shopping Centre in Greater Manchester. 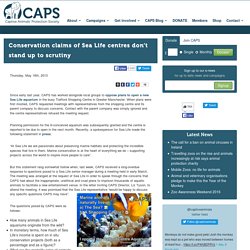 When plans were first mooted, CAPS requested meetings with representatives from the shopping centre and its parent company to discuss concerns. Contact with the parent company was simply ignored and the centre representatives refused the meeting request. Planning permission for the ill-conceived aquarium was subsequently granted and the centre is reported to be due to open in the next month. Recently, a spokesperson for Sea Life made the following statement in press: “At Sea Life we are passionate about preserving marine habitats and protecting the incredible species that live in them. But this statement rang somewhat hollow when, last week, CAPS received a long-overdue response to questions posed to a Sea Life senior manager during a meeting held in early March. The Debate - The Ethics Of Keeping Whales And Dolphins Captive. In February 1984, there was a workshop on "Animals on Display: Educational and Scientific Impact" held at the John G. 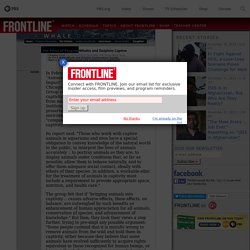 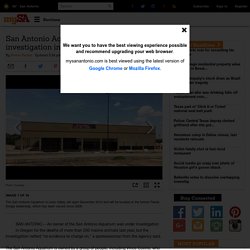 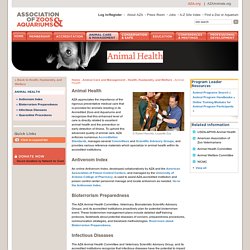 How Aquariums Can Actually Save Animals in the Wild. CAPS - 10 facts about zoos. 1. 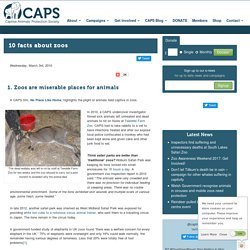 Zoos are miserable places for animals A CAPS film, No Place Like Home, highlights the plight of animals held captive in zoos. This dead wallaby was left to rot by staff at Tweddle Farm Zoo for two weeks and the zoo refused to carry out a post mortem to establish why the animal died. Ethics - Animal ethics: Animals for entertainment. A List of Arguments for and Against Zoos. By Doris Lin Updated February 09, 2017. 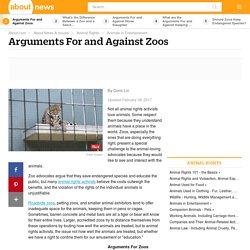 Not all animal rights activists love animals. Some respect them because they understand animals have a place in the world. National Zoo Deaths: "Circle of Life" or Animal Care Concerns? Animal deaths from illness and injury have raised questions about animal care, and about the impact of federal budget cuts, at one of the nation's foremost zoos. 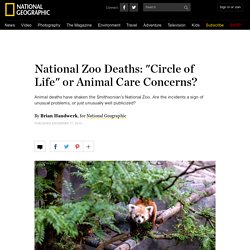 A red river hog, a lesser kudu, and a Dama gazelle have died in recent months at the Cheetah Conservation Station, home to the big cats and other species of the African savannah, and one of the most popular exhibits at the Smithsonian's National Zoo in Washington, D.C. The series of tragic animal deaths, plus a zebra attack on a zookeeper, has triggered investigation and controversy at the federally funded zoo. The hog succumbed to an infection, and the two antelope died from injuries that they sustained from running into the walls of their enclosures. Humane zoos good for animals. Yeah, we know, we know. 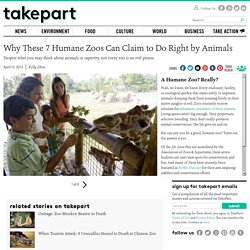 Every enclosure, facility, or zoological garden that exists solely to imprison animals—keeping them from roaming freely in their native jungles—is evil. Zoos routinely receive criticism for inhumane treatment of their animals. Living spaces aren't big enough. They perpetuate selective breeding. They don't really promote animal conservation. But can any zoo be a good, humane zoo? Of the 221 zoos that are accredited by the Association of Zoos & Aquariums, these seven facilities are can't-miss spots for conservation and fun.

So next time you’ve got a hankering to get up close and personal with a member of the animal kingdom, check out these humane zoos. CAPS - Zoos. We believe that wild animals belong in their natural habitat and should not be caged for our entertainment. Behind bars. She doesn’t belong here. PETA (People for the Ethical Treatment of Animals)