Comparison of crowd funding services. Crowd funding (alternately: crowdfunding, crowd financing, equity crowdfunding) is a process in which individuals pool money and other resources to fund projects initiated by other people or organizations. 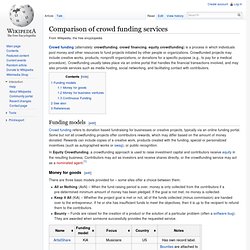 Crowdfunded projects may include creative works, products, nonprofit organizations, or donations for a specific purpose (e.g., to pay for a medical procedure). Crowdfunding usually takes place via an online portal that handles the financial transactions involved, and may also provide services such as media hosting, social networking, and facilitating contact with contributors. Funding models[edit] Crowd funding refers to donation based fundraising for businesses or creative projects, typically via an online funding portal.

Some but not all crowdfunding projects offer contributors rewards, which may differ based on the amount of money donated. In Equity Crowdfunding, a crowdfunding approach is used to raise investment capital and contributors receive equity in the resulting business. Habitat 67. Coordinates: Habitat 67, as seen from street level. 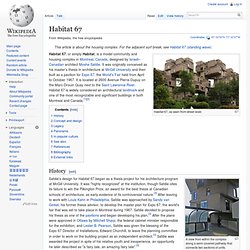 Habitat 67, or simply Habitat, is a model community and housing complex in Montreal, Canada, designed by Israeli–Canadian architect Moshe Safdie. It was originally conceived as his master's thesis in architecture at McGill University and then built as a pavilion for Expo 67, the World's Fair held from April to October 1967. It is located at 2600 Avenue Pierre-Dupuy on the Marc-Drouin Quay next to the Saint Lawrence River.

Habitat 67 is widely considered an architectural landmark and one of the most recognizable and significant buildings in both Montreal and Canada.[1][2] History[edit] A view from within the complex along a semi-covered pathway that connects two sections of units. 6 Unknown Artists Who Made All of Our Favorite Movie Moments. With the Oscars on the horizon, it's important to remember that behind every great "film author" are like a hundred other artists with slightly worse publicists. 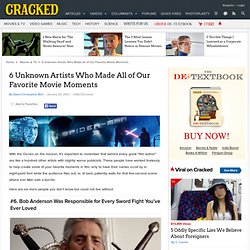 These people have worked tirelessly to help create some of your favorite moments in film, only to have their names scroll by in eight-point font while the audience files out, or, at best, patiently waits for that five-second scene where Iron Man eats a burrito. Here are six more people you don't know but could not live without. #6. Bob Anderson Was Responsible for Every Sword Fight You've Ever Loved g33kwatch.com Think of the coolest sword fight you've ever seen in a movie.

Or how about Captain Jack Sparrow versus William Turner in Pirates of the Caribbean? Blissfully beheading him before he could start the Monty Python Black Knight routine. Or Connor MacLeod chopping heads off in Highlander? If you said "Which Highlander? " It doesn't matter which one you chose, because one man was responsible for all of those fights and more.

. #5. The 5 Most Badass Movie Scenes That Happened in Real Life. Action movies have always been in an arms race to outdo each other. 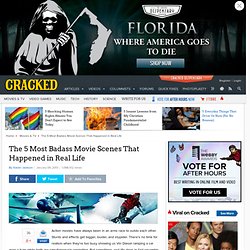 Stunts and effects get bigger, louder, and stupider. There's no time for realism when they're too busy showing us Vin Diesel ramping a car over a train while both are simultaneously exploding. But sometimes, real life does in fact resemble a Michael Bay movie, only minus the giant robots (usually). That's why in the real world we've seen ... #5. Scientif38 This is one of those scenes too stupid for a James Bond movie: Our hero is skiing or boarding down a mountain when an avalanche thunders behind him, and he races ahead of it before he can be crushed under a thousand tons of snow. Or Call of Duty: Black Ops: Or the animated feature Hoodwinked! Yes, it's so ridiculous a stunt that two of our three examples were a cartoon and a video game. Who, in a St. The Reality: Matthias Giraud and Stefan Laude are both experienced skiers used to zooming around on mountaintops. 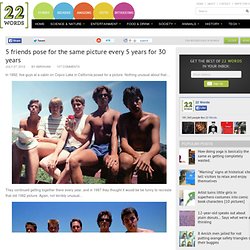 Nothing unusual about that… They continued getting together there every year, and in 1987 they thought it would be be funny to recreate that old 1982 picture. Again, not terribly unusual… Then 1992 came, and the guys were still friends and were still making their yearly trip to the lake. When they posed for the same pic for the third time, they knew a tradition had been born… Will they meet again for the photo in 2017? We plan on doing this for the rest of our lives, no matter what — Up until there’s one guy just sitting in the same pose! Check out the guys’s site about these pics. Related… From being babies to having them, these brothers never missed a pic with Santa [30 pics] Photographer’s painfully beautiful documentation of his wife’s battle with breast cancer [15 pics]

Uncover the market price of corruption in India.