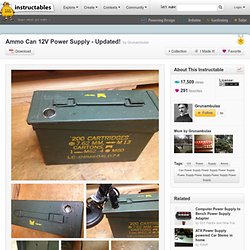 I had some 12V batteries from an old alarm system and telephone backup system. I simply wired them in parallel and wired in a power outlet and alligator clips. I currently use the alligator clips to attach the batteries to a trickle charger. When not charging I put two ziplock minibags on the end to prevent their shorting out. The power outlet is simply drilled into the top of the ammo can.

Dual USB Charger With Switching Regulator. USB charger from 12V Li-ion batteries. Motivation: Have a load of general purpose 12V lithium-ion batteries and want to be able to charge USB based devices on the go. 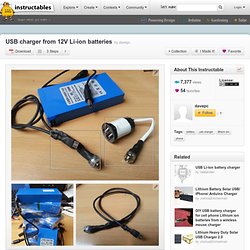 Battery voltage and state of charge - Energy Matters. If you're the owner of a mobile or off grid solar power system, one of the most obsessive pastimes is determining how much charge you have left in your deep cycle battery bank. 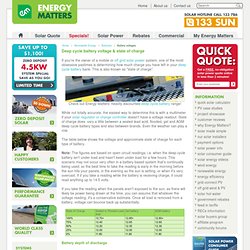 This is also known as "state of charge". Check out Energy Matters' heavily discounted deep cycle battery range! While not totally accurate, the easiest way to determine this is with a multimeter if your solar regulator or charge controller doesn't have a voltage readout. State of charge does vary a little between a sealed lead acid, flooded, gel and AGM deep cycle battery types and also between brands. Even the weather can play a role The table below shows the voltage and approximate state of charge for each type of battery.

Note: The figures are based on open circuit readings; i.e. when the deep cycle battery isn't under load and hasn't been under load for a few hours. General rule of thumb: the less your deep cycle battery is discharged before being properly recharged again, the longer it will last. Battery Metering. With proper care, quality batteries that are sized correctly for your application will last for years. 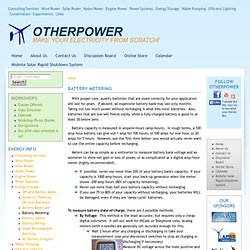 Can use ipad charger to charge iphone? Their was another post about this charging issue and I explained it all basic on my educational level with electronics. 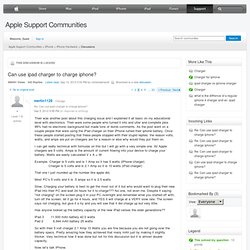 Their were some people who turned it into and utter and complete joke. 99% had no electronic background but made tons of dumb comments. As the post went on a couple people that were using the iPad charger on their iPhone ruined their iphone battery. Once these people started posting that these people stopped with their stupid replies. the reason volts, watts, and amps are put on chargers are for a reason or else why would they put them on. I can get really technical with formulas on this but I will go with a very simple one. All Apple chargers are 5 volts. Example. Amps/voltage on a cigarette lighter. RV 12v Information - Everything You Need to Know. Understanding and Maintaining Your RV's 12v System 12v Systems The information on this page is primarily for owners of pop-ups, travel trailers and 5th wheel RVs. 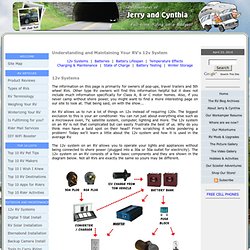 Other type RV owners will find this information helpful but it does not include much information specifically for Class A, B or C motor homes. Also, if you never camp without shore power, you might want to find a more interesting page on our site to look at. That being said, on with the show... Battery Desulfation - Storage. Find out how to desulfate/desulphate and rejuvenate lead acid batteries home > storage | electronics A Lead Acid Battery is made up of plates of lead in a case filled with an electrolyte (dilute sulphuric acid). 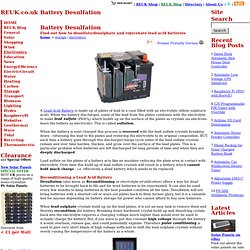 Meters / Guages. Connectors. Camping Power Supply. The Grizzly Solar Generator. I made this solar generator mainly for camping but in between trips I like to take it to the lake where I have power for all of my gafgets. 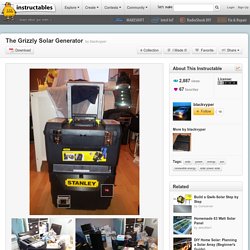 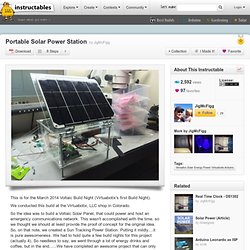 We conducted this build at the Virtuabotix, LLC shop in Colorado. So the idea was to build a Voltaic Solar Panel, that could power and host an emergency communications network. This wasn't accomplished with the time, so we thought we should at least provide the proof of concept for the original idea. So, on that note, we created a Sun Tracking Power Station. Putting it mildly....it is pure awesomeness. So.. Track the sun vertically.