10 of the Greatest Short Stories About Love. Tomorrow, Junot Díaz’s newest story collection, This is How You Lose Her, hits shelves, and we predict that everyone you know will be reading it by the weekend. 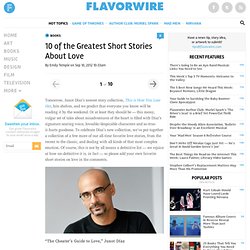 Or at least they should be — this messy, vulgar set of tales about misadventures of the heart is filled with Díaz’s signature searing voice, loveable/despicable characters and so-true-it-hurts goodness. To celebrate Díaz’s new collection, we’ve put together a collection of a few more of our all-time favorite love stories, from the recent to the classic, and dealing with all kinds of that most complex emotion. Of course, this is not by all means a definitive list — we rejoice at how un-definitive it is, in fact — so please add your own favorite short stories on love in the comments. “The Cheater’s Guide to Love,” Junot Díaz. 21 Books Written by and About Women That Every Man Should Read. This week, we read a great interview with Meg Wolitzer (whose just-released novel The Interestings is currently being enjoyed by more than one member of this office). 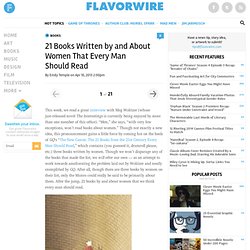 “Men,” she says, “with very few exceptions, won’t read books about women.” Though not exactly a new idea, this pronouncement gains a little force by coming hot on the heels of GQ‘s “The New Canon: The 21 Books from the 21st Century Every Man Should Read,” which contains (you guessed it, drumroll please, etc.) three books written by women. Though we won’t disparage any of the books that made the list, we will offer our own — as an attempt to work towards ameliorating the problem laid out by Wolitzer and neatly exemplified by GQ. Evelyn Hope by Robert Browning. F. Scott Fitzgerald: “Thank You for the Light” In the News: Page-Turner. Letter to a Young Poet. Letters of Note. Literature & Poetry Sites. Morella - Edgar Allan Poe. Read the works of Edgar Allan Poe. 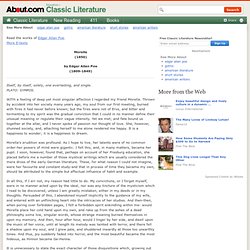 More E-texts Morella (1850) by Edgar Allan Poe (1809-1849) Itself, by itself, solely, one everlasting, and single. PLATO: SYMPOS. WITH a feeling of deep yet most singular affection I regarded my friend Morella. Morella's erudition was profound. Sorrow passes and we remain. In July of 1883, the novelist Henry James received an emotional letter from Grace Norton — a good friend and fellow writer who, following a death in the family, had recently become depressed and was desperate for direction. 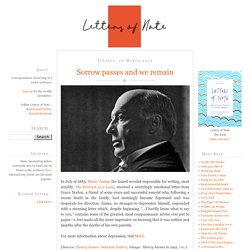 James's beautiful response can be seen below. It is, without a doubt, one of the greatest letters of advice I've ever had the fortune to read. For more information about depression, visit Mind. (Source: Henry James: Selected Letters; Image: Henry James in 1912, via.) 131 Mount Vernon St., Boston July 28thMy dear Grace, Before the sufferings of others I am always utterly powerless, and the letter you gave me reveals such depths of suffering that I hardly know what to say to you. The 21 Books From the 21st Century Every Man Should Read: Books. Anyone who's been handed a high school diploma can tick off the classic novels from the twentieth century: The Great Gatsby, A Farewell to Arms, The Grapes of Wrath. 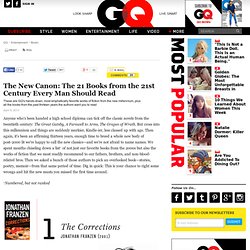 But cross into this millennium and things are suddenly murkier, Kindle-ier, less classed up with age. Then again, it's been an affirming thirteen years, enough time to breed a whole new body of post-2000 lit we're happy to call the new classics—and we're not afraid to name names. We spent months chiseling down a list* of not just our favorite books from the 2000s but also the works of fiction that we most readily recommend to our fathers, brothers, and non-blood-related bros. Then we asked a bunch of those authors to pick an overlooked book—stories, poetry, memoir—from that same period of time.

Dig in quick: This is your chance to right some wrongs and hit the new musts you missed the first time around. The bulk of all human utterances is plagiarism. In 1892, deafblind author Helen Keller was accused of plagiarism after a short story of hers, named "The Frost King," was identified as being extremely similar to Margaret Canby's "Frost Fairies. 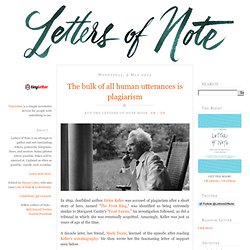 " An investigation followed, as did a tribunal in which she was eventually acquitted. Amazingly, Keller was just 12 years of age at the time. (Source: Mark Twain's Letters, Vol. 2 of 2; Image: Mark Twain, via.) Riverdale-on-the-Hudson St. Patrick's Day, '03Dear Helen,—I must steal half a moment from my work to say how glad I am to have your book, and how highly I value it, both for its own sake and as a remembrance of an affectionate friendship which has subsisted between us for nine years without a break, and without a single act of violence that I can call to mind. The Vision of Sin. In the 1840s, shortly after reading Alfred Tennyson's poem, "The Vision of Sin," mathematician and "father of the computer," Charles Babbage, wrote the following letter to the poet and suggested an alteration in the name of accuracy. 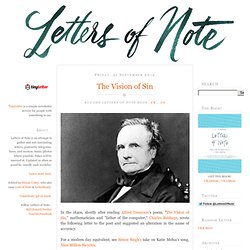 For a modern day equivalent, see Simon Singh's take on Katie Melua's song, Nine Million Bicycles. (Source: The Difference Engine: Charles Babbage and the Quest to Build the First Computer; Image: Charles Babbage in 1860, via LIFE.) Sir:In your otherwise beautiful poem "The Vision of Sin" there is a verse which reads – "Every moment dies a man, Every moment one is born. " It must be manifest that if this were true, the population of the world would be at a standstill. What To Read Next. Ars longa, vita brevis, said Hippocrates—more or less: time’s a-wastin’. The worst corollary of this aphorism, to my mind, is that we are not going to have time to read everything. In fact, we’re going to be able to read only the tiniest little bit.

Some thousands of books—that is it.