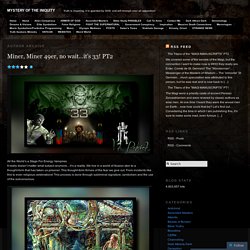 PT2 All the World’s a Stage For Energy Vampires It really doesn’t matter what subject anymore…it’s a reality. We live in a world of illusion akin to a thought-form that has taken us prisoner. This thought-form thrives of the fear we give out. From incidents like this to even religious celebrations! In the secret laboratories of the Illuminati, time travel, cloning, interstellar travels are all common occurrences…. and they are not used for the welfare of humanity. Even the mine (copper) where the miners were trapped has a profound occult significance. COPPER Copper is a chemical element with symbol Cu (from Latin: cuprum) and atomic number 29. Copper is ruled by Venus/Goddess Venus.

In this link, it takes you to the book by Lewis Spence, “The History of Atlantis; you will see picture: “Atlantean Armor” Spence was at one point the Chosen Chief of British Druidism, and a member of at least one Rosicrucian organization. The Mysterious Connection Between Sirius and Human History. Since ancient times and across multiple civilizations, Sirius, the dog star, has been surrounded with a mysterious lore. Esoteric teachings of all ages have invariably attributed to Sirius a special status and the star’s importance in occult symbolism is an attestation of that fact. What makes Sirius so special? Is it simply due to the fact that it is the brightest star in the sky? Or is it also because humanity has an ancient, mysterious connection with it?

This article looks at the importance of Sirius throughout History and secret societies and will describe the symbolism surrounding it. Sirius is located in the constellation Canis Major – also known as the Big Dog – and is therefore known as the “dog star”. Artifacts of ancient civilizations have revealed that Sirius was of a great importance in astronomy, mythology and occultism. In Ancient Civilizations. Sothic cycle. The Sothic cycle or Canicular period is a period of 1,461 ancient Egyptian years (of 365 days each) or 1,460 Julian years (averaging 365.25 days each). 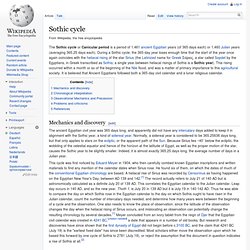 During a Sothic cycle, the 365-day year loses enough time that the start of the year once again coincides with the heliacal rising of the star Sirius (the Latinized name for Greek Σείριος, a star called Sopdet by the Egyptians, in Greek transcribed as Sothis; a single year between heliacal risings of Sothis is a Sothic year). This rising occurred within a month or so of the beginning of the Nile flood, and was a matter of primary importance to this agricultural society.

It is believed that Ancient Egyptians followed both a 365-day civil calendar and a lunar religious calendar. Mechanics and discovery[edit] This cycle was first noticed by Eduard Meyer in 1904, who then carefully combed known Egyptian inscriptions and written materials to find any mention of the calendar dates when Sirius rose.

Chronological interpretation[edit] A Sun-Sirius System? The Sirius Mystery, the Supreme Council 33rd Degree, and the Great White Lodge of Freemasonry. Robert Temple and a few notes on Freemasonry 2005 10 31 By Robert Temple, Master Mason | freemasonrywatch.org The Ancient Astronomers saw all the great Symbols of Masonry in the Stars. 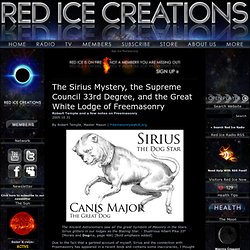 Sirius glitters in our lodges as the Blazing Star. - Illustrious Albert Pike 33° (Morals and Dogma, page 486) [Bold emphasis added] Due to the fact that a garbled account of myself, Sirius and the connection with Freemasonry has appeared in a recent book and contains some inaccuracies, I thought it best to put a correct account on record, lest any false impressions be too widely circulated. I have a very friendly acquaintance with Christopher Knight and Robert Lomas, whose second book The Second Messiah (Century, London, 1997) contains nearly a page about me (p. 216). They also stated that I am a direct descendant of George Washington. The Leonard Brothers were exceptionally tall and phenomenally strong. The Sirius Mystery, the Supreme Council 33rd Degree, and the Great White Lodge of Freemasonry. 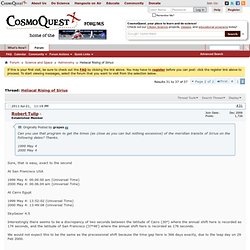 The Egyptians used the heliacal rising of Sirius as a marker for the annual rising of the Nile. Due to their use of a 365 day calendar, comprising twelve months, each with three x ten day weeks, plus five epagomenal days, the heliacal rise of Sirius drifted around their year over a 1461 year period known as the Sothic Cycle. Egyptian knowledge of this Sothic Cycle shows that they understood the period of the tropical year as 365.25 days. Sirius 12000BC Heliacal Rising Cairo.gif 51.11 KiB In the year 12,000 BC, a date well before historical records, this diagram shows the southeast horizon from Cairo, and all locations at the same latitude of 30° north, at just before dawn on 25 June.

Sirius 11000BC Heliacal Rising Cairo.gif 24.07 KiB In 11,000 BC, the date of the highest northerly position of Sirius at dawn had moved back several weeks to 17 July. Sirius 9000BC Heliacal Rising Cairo.gif 25.35 KiB. HIGHLIGHTS ~ SIRIUS. SIRIUS - THE DOG STAR - THE LOST AND MISSING STAR. The Dream Connection by Dee Finney updated 12-7-05 More on the Dog Star The Mithras Connection to the Constellation of Taurus Star Watch - (Maps) Hypocephalus - Sons Aumen Israel. 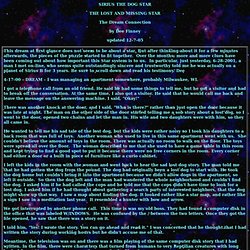 Sirius - The Sacred Star of Isis.