Wellington Arch - 'Peace Descending' - is this dove symbolism? Check. London's Occult Symbols Scotland Yard's Eternal Flame and Number 10. Where is the Real Number 10, and who runs the show So the symbol for Fire and the Symbol for Water when overlaped present the six pointed star. 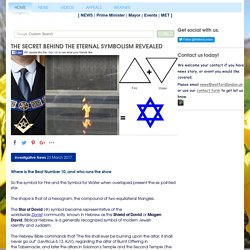 The shape is that of a hexagram, the compound of two equilateral triangles. The Star of David (✡) symbol became representative of the worldwide Zionist community, known in Hebrew as the Shield of David or Magen David, Biblical Hebrew, is a generally recognized symbol of modern Jewish identity and Judaism. The Hebrew Bible commands that "The fire shall ever be burning upon the altar; it shall never go out" (Leviticus 6:13, KJV), regarding the altar of Burnt Offering in the Tabernacle, and later the altars in Solomon's Temple and the Second Temple (the latter sacked by Rome in 70 AD). Many churches (especially Catholic and Lutheran), along with Jewish synagogues, feature an eternal flame on or hung above their altars (churches) or Torah arks (synagogues). London Has Fallen - Wikipedia. Filming began on October 24, 2014, in London. 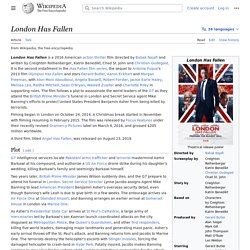 A Christmas break started in November with filming resuming in February 2015. The film was released on March 4, 2016, by Focus Features under their recently revived Gramercy Pictures label and grossed $205 million worldwide. A second sequel, titled Angel Has Fallen, is expected to start production in 2017. Plot[edit] Western intelligence services collaborate to identify Pakistani arms dealer and terrorist leader Aamir Barkawi (Alon Moni Aboutboul) as the mastermind behind several terrorist attacks around the world, specifically a devastating hotel bombing in Manila, and authorize an American drone strike against Barkawi's compound, apparently killing Barkawi and his family. Two years later, after the death of UK Prime Minister James Wilson, world leaders from the major Western countries, including US President Benjamin Asher (Aaron Eckhart) make plans to attend his funeral services in London.

Cast[edit] Masonic Procession through Occult landmarks 10 April 2017. The Mysteries of Isis: Chariots used in Sacred Procession to Isis - Boudicca Westminster Bridge is Isis. This is Masonic - the returning of items. Floral tribute - Red and White Roses; No.1 Daddy or No 1's Daddy? Murdered Pc Keith Palmer has been hailed at his funeral as a “hero” whose “blue lamp will shine bright forever”. 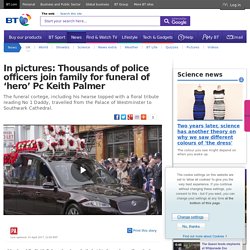 Boudicca chariot statue Westminster Bridge - its not Boudicca - its goddess imagery - inscription is aligned to goddess 'of everything' Palmer brought lie in state; eulogy: 'lamp burns brightly' lightbearer > Venus > Isis. The body of hero PC Keith Palmer who was murdered in the Westminster terror attack has been brought to a chapel at the Houses of Parliament. 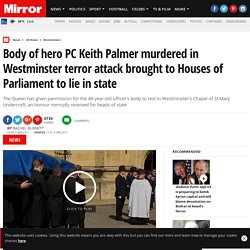 PC Palmer's coffin was taken through Old Palace Yard, near where he was stabbed to death by extremist Khalid Masood last month. The Queen has given permission for the 48-year-old officer's body to rest in Westminster's Chapel of St Mary Undercroft. It is an honour normally reserved for heads of state and which was bestowed on former prime minister Margaret Thatcher and Labour politician Tony Benn. Draped in a police flag, his body was taken by hearse to the resting place yjid afternoon, where it will stay overnight before his full police funeral at Southwark Cathedral tomorrow. 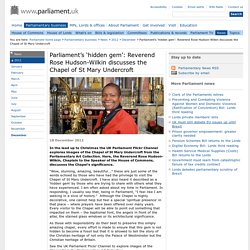 Here, the Reverend Rose Hudson-Wilkin, Chaplain to the Speaker of the House of Commons, discusses the Chapel’s significance. “Wow, stunning, amazing, beautiful...” these are just some of the words echoed by those who have had the privilege to visit the Chapel of St Mary Undercroft. I have also heard it described as a ‘hidden gem’ by those who are trying to share with others what they have experienced. I am often asked about my time in Parliament. The Monument to the Great Fire of London - Eternal Flame. Bourton Grounds Temple. Bourton Grounds Temple was and Egyptian temple dedicated to the goddess Isis located in Buckinghamshire, UK. 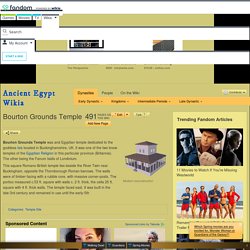 "LONDINI AD FANUM ISIDIS"...or, 'To the... - Merovingians: The Once, The Present, & Future kings. RIB 2. Dedication to the Mother Goddesses. RIB 2. 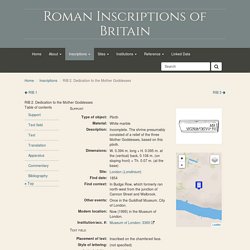 Dedication to the Mother Goddesses. Procession Route - mirrors a festival, ends at temple. On Monday, people will gather to pay their respects to the hero police officer who died trying to stop the Westminster terror attack. 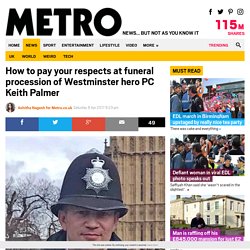 PC Keith Palmer was stabbed to death when he attempted to stop Khalid Massod from crashing a vehicle into the gates of the Palace of Westminster. In total, five people were killed in the attack in one of London’s busiest areas. In an emotional statement released to the public, PC Palmer’s family said they were touched by the ‘outpouring of love’ for the hero officer.

‘We have been overwhelmed by the love and support for our family, and most especially the outpouring of love and respect for our Keith,’ it said. ‘We want to thank everyone who has reached out to us over the past few days for their kindness and generosity. Pant-staining moment lorry comes round corner on wrong side of road ‘We miss him so much, but we are also incredibly proud of Keith.’ Iron Age chariot and horse found buried together in Yorkshire. 2017 Westminster attack - Wikipedia. On 22 March 2017, a terrorist attack took place in the vicinity of the Palace of Westminster in London, seat of the British Parliament. 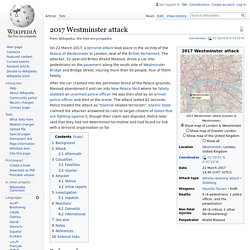 The attacker, 52-year-old Briton Khalid Masood, drove a car into pedestrians on the pavement along the south side of Westminster Bridge and Bridge Street, injuring more than 50 people, four of them fatally. After the car crashed into the perimeter fence of the Palace grounds, Masood abandoned it and ran into New Palace Yard where he fatally stabbed an unarmed police officer. He was then shot by an armed police officer and died at the scene. The attack lasted 82 seconds. Police treated the attack as "Islamist-related terrorism". Background[edit] PC Keith Palmer funeral: held at Southwark cathedral (isis) full masonic funeral and procession.

A funeral for the hero police officer who died trying to stop a terrorist during the Westminster terror attack will be held in the coming days. 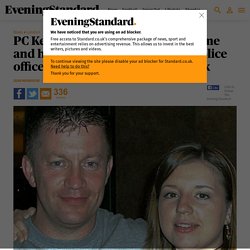 PC Keith Palmer was stabbed to death as he tried to stop crazed killer Khalid Masood after the terrorist crashed into the gates of the Palace of Westminster before being shot dead. Five innocent people were killed in the attack. Hundreds of people are expected to gather and remember the officer, including his colleagues from the force, at the full police service funeral in central London. His friends, family and even his beloved Charlton Athletic football club have paid tribute to the “amazing and wonderful” fallen officer. Index Black Madonnas - we found the Black Madonna of Westminster. Introduction: Black Madonnas and other Mysteries of Mary Africa The Americas Austria Belgium Cuba Eastern Europe England and Wales/United Kingdom France Germany.

I have just chaired a meeting of the Government’s emergency committee, COBRA, following the sick and depraved terrorist attack on the streets of our Capital this afternoon. The full details of exactly what happened are still emerging. But, having been updated by police and security officials, I can confirm that this appalling incident began when a single attacker drove his vehicle into pedestrians walking across Westminster Bridge, killing two people and injuring many more, including three police officers.

This attacker, who was armed with a knife, then ran towards Parliament where he was confronted by the police officers who keep us – and our democratic institutions – safe. Tragically, one officer was killed. London Attack: Ultra-Masonic eulogy in Jpeg - White Rose, Queen of Heaven symbolism. The neighbour of the Westminster terror attacker's elderly fourth victim told today how he played him his favourite Queen songs as he lay dying in hospital. London Terror: Masonic Eulogy - 'beautiful flower' - this is a direct qoute from Rudlolf Steiners Isis Mary Sophia, the most b f of humanity.

London attack: Candelit vigil; thousand points of light; festival of Torches, Hecate. The Queen has said her "thoughts, prayers, and deepest sympathy" are with all those who have been affected by Wednesday's "awful violence". In a message sent to Acting Commissioner of the Metropolitan Police Craig Mackey, the Monarch also expressed her thanks and admiration to the Met and others who work to protect others. The Queen was at Buckingham Palace as the attack - in which three people and an extremist died and 40 others were injured - took place and a few hours later had her weekly meeting with the Prime Minister, where it is likely she was updated in person about the incident.

She said in her message: "Following the shocking events in Westminster, Prince Philip and I are sorry that we will not be able to open the New Scotland Yard building as planned today, for very understandable reasons. Rose laying at Scotland Yard - Red and White Roses - Rosa M, elite ent via tv, trafalger vigil, awful= full of AWE / ORE. LONDON Mayor Sadiq Khan has invited all Londoners – and everyone visiting the city – to come together tonight to pay tribute to those who died in yesterday’s Westminster terrorist attack. A candlelit vigil will take place in Trafalgar Square from 6pm this evening. London News Pictures SWNS:South West News Service This video isn't encoded for your device. New Scotland Yard Eternal Flame plaque.