Anthropology - reading guide. Classical social theories - nine lectures. Religion in Human Evolution: From the Paleolithic to the Axial Age: Amazon.co.uk: Robert N. Bellah: Books. "Even though, as it is widely believed, morality and religion are evolutionary emergents, evolution cannot tell us which one of them to follow. 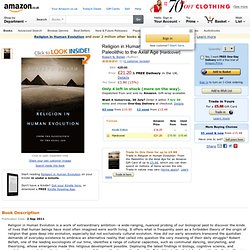 " (48) This "discouraging but indisputable truth," for Bellah, demonstrates the challenge of finding meaning "only in evolution" for today's scholars and thinkers. This review, in-depth as far as small space allows, looks at how Bellah's work compares to recent surveys by other scholars of the Axial Age. A life's work, for a sociologist born in 1927, remains a formidable contribution in six-hundred narrated pages and, as he acknowledges, stopping 2,000 years before our era, it's long enough. It gives prolonged attention to what Max Weber and Emile Durkheim pioneered: the study of religious aspects as they culturally evolved.

Of course, it's bolstered by what science knows now vs. when his predecessors labored to make sense out of religion's roots and branches. Woodbine. 01 Prehistoric Voiceprints (59 min version) The Eagle and The Condor Prophecy - The Pachamama Alliance. The Eagle and the Condor is an ancient Amazon prophecy that speaks of human societies splitting into two paths – that of the Eagle, and that of the Condor. 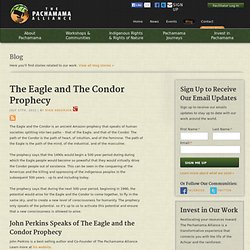 The Role of the Arab-Islamic World in the Rise of the West: Implications for Contemporary Trans-Cultural Relations: Nayef R.F. Al-Rodhan: 9780230393202: Amazon.com. The Center for Process Studies: Media Files. Material Politics: Disputes Along the Pipeline (RGS-IBG Book Series): Andrew Barry: 9781118529126: Amazon.com. A reader’s guide to the “ontological turn” – Part 1. Editor’s note: In the wake of the discussion about the ‘ontological turn’ at this year’s American Anthropological Association conference, we asked several scholars, “which texts or resources would you recommend to a student or colleague interested in the uses of ‘ontology’ as an analytical category in recent work in anthropology and science and technology studies?” 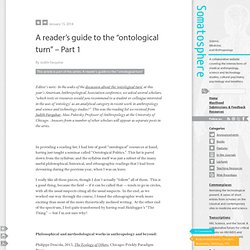 This was the reading list we received from Judith Farquhar, Max Palevsky Professor of Anthropology at the University of Chicago. Answers from a number of other scholars will appear as separate posts in the series. TeleSUR. Way of St. James. Major Christian pilgrimage route[edit] The Way of St. 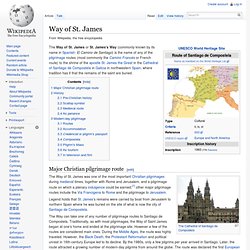 James was one of the most important Christian pilgrimages during medieval times, together with Rome and Jerusalem, and a pilgrimage route on which a plenary indulgence could be earned;[1] other major pilgrimage routes include the Via Francigena to Rome and the pilgrimage to Jerusalem. Legend holds that St. The Politics of Ontology — Cultural Anthropology. Much energy has been devoted over the last decade to the so-called ontological turn in the social sciences, and in anthropology in particular. 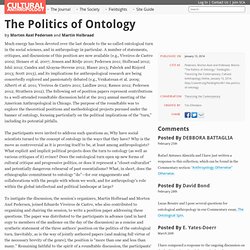 Travel to Ecuador, Mexico with Jade Journeys. UNPFIP Network: The Closing of the Intercultural University "Amawtay Wasi" in Ecuador. Is Consciousness Universal? For every inside there is an outside, and for every outside there is an inside; though they are different, they go together. 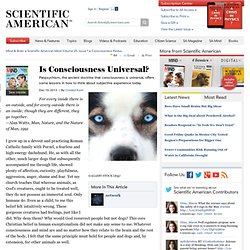 —Alan Watts, Man, Nature, and the Nature of Man, 1991 I grew up in a devout and practicing Roman Catholic family with Purzel, a fearless and high-energy dachshund. He, as with all the other, much larger dogs that subsequently accompanied me through life, showed plenty of affection, curiosity, playfulness, aggression, anger, shame and fear. Yet my church teaches that whereas animals, as God's creatures, ought to be treated well, they do not possess an immortal soul. Only humans do. Educate in resistance: the autonomous Zapatista schools. AN461 Anthropological Approaches to Questions of Being. This information is for the 2013/14 session. 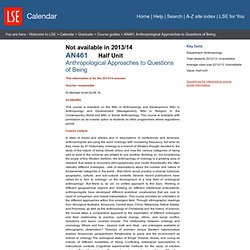 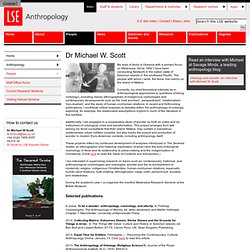 Aaa.confex.com/aaa/2013/webprogrampreliminary/Session8426.html. Reviewed By: Society for Cultural Anthropology Thursday, November 21, 2013: 8:00 AM-11:45 AM Abstract not available in preliminary program. 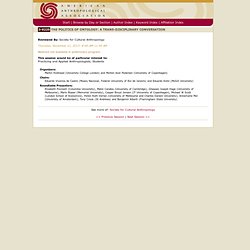 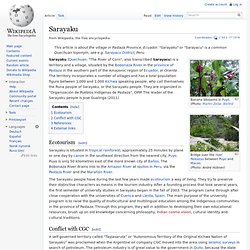 "Sarayaku" or "Sarayacu" is a common Quechuan toponym, see e.g. Pueblo Sarayaku - Children of the Jaguar (Full Documentary) Sarayaku. DEBTOCRACY (FULL - ENG Subs) Over 130 Renowned Scholars Call on President Correa to Defend Yasuní-ITT. Amazon WatchFOR IMMEDIATE RELEASE | September 19, 2013 For more information, contact:Ivonne Yanez (in Ecuador) at +593 232 11103 or sudamerica@oilwatch.org Kevin Koenig (in Ecuador) at +593 99 794 9041 or kevin@amazonwatch.org Adam Zuckerman at +1 207 838 5806 or adam@amazonwatch.org Quito, Ecuador – This week more than 130 renowned academics and intellectuals from all over the world sent a letter to Ecuadorian President Rafael Correa.

Scholars including Vandana Shiva, James Hansen, Naomi Klein, Boaventura de Souza Santos, Arturo Escobar, and Timothy Mitchell, among others, headed up the letter. Here are links to versions in Spanish and in English. ‘The last free people on the planet’ <div class="greet_block wpgb_cornered"><div class="greet_text"><div class="greet_image"><a href=" rel="nofollow"><img src=" alt="WP Greet Box icon"/></a></div>Hello there! If you are new here, you might want to <a href=" rel="nofollow"><strong>subscribe to the RSS feed</strong></a> for updates on this topic.

<div style="clear:both"></div></div></div> In small pockets around the world live isolated indigenous communities, groups that, even though they have had run-ins with their neighbours or Westerners, prefer to avoid or resist any further contact. Although we sometime call them ‘uncontacted,’ a more accurate description is probably ‘voluntarily isolated’ or ‘withdrawn’ or ‘evasive.’ Many of these groups have tragic histories of encounters with outsiders — too much ‘contact’ — where they fought to preserve their isolation and, usually, came up much worse off than their more numerous intruders.

Reencounter of the Original Peoples and Nationalities of Abya Yala in Ecuador. Representatives of the original peoples and nationalities of the Americas returned to Ecuador last week for the twentieth anniversary of a historic gathering that advanced hemispheric unity. Read a Peace Report- Green Light for Indigenous Intercultural University Amawtay Wasi of Ecuador. NativeWeb. The Pachamama Alliance – Bridging the Indigenous and Modern Worlds. New Tab. Books of the decade in ecocultural theory. On animism, multinaturalism, & cosmopolitics. Since there isn’t much available in English about Philippe Descola’s writings on animism, I thought I would share a piece of the cosmopolitics argument I mentioned in my last post. University: WebMedia. Confederation of Indigenous Nationalities of Ecuador.