Darren Huston - IMDb. Love Poems on Poem Hunter. Love Between The Friends Just before we took that final leap, From childhood into something else, We once again called a truce. 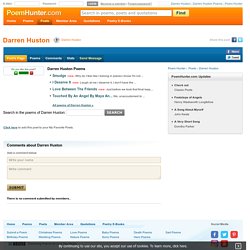 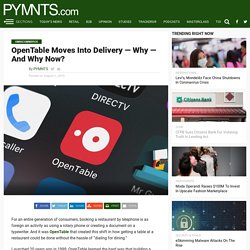 And it was OpenTable that created this shift in how getting a table at a restaurant could be done without the hassle of “dialing for dining.” Launched 20 years ago in 1999, OpenTable learned the hard way that building a reservations platform required a “go-deep-before-going-wide” strategy. A decade later in 2009, OpenTable was a nationwide service, online reservations were a common practice and the firm went public with a listing on the Nasdaq.

At the time, Priceline CEO Darren Huston noted the deal was a natural move, given the inherent synchronicity between the two marketplaces. “The kind of work that we do day-to-day is very similar. “It’s something that’s taken a little bit longer to scale up than we thought it would,” then-interim CEO Jeff Boyd said in an interview. That was then, and this is now. Videos Websummit. Darren Huston PDF. Darren Huston (@HustonDarren) Darren Huston - Blog. Darren Huston’s Booking Agent and Speaking Fee - Speaker Booking Agency. Hot 25 Startups 2019: Slickspaces. Immigrant Profile: Darren Huston. Background. 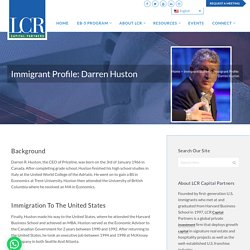 Darren Huston Economics Topper. Title: President and CEO, The Priceline Group Born: January 3, 1966, Hope, British Columbia Education: BS in economics, Trent University; MA in economics, University of British Columbia; MBA, Harvard Business School Early Marker: Vice president at Starbucks responsible for acquisitions and new product development. Big Idea: The former Microsoft exec stepped up to the top job at Priceline in January 2014 after running the group's main revenue generator, Amsterdam-based Booking.com. Since 2011 he has been tackling the challenges of its main advertising outlet, Google, increasingly competing with it for travel-related bookings, of expanding its hospitality-related services, such as with its acquisition of OpenTable, and of retaining its customers as they migrate from desktop to mobile devices. 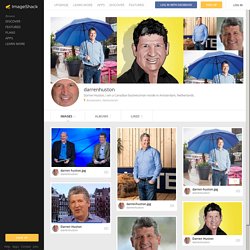 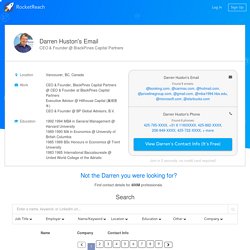 We had no where to begin. Scouring the web at all hours of the night wasn't gonna cut it. RocketReach has given us a great place to start. Our workflow has solid direction now - we have a process in place the begins with RocketReach and ends with huge contact lists for our sales team..it probably saves Feedtrail about 3 months of work in terms of lead gathering. . - Chris, CoFounder @ Feedtrail Prior to RocketReach, we would reach out to people through professional networking sites like Linkedln. Darren Huston Profile On Fastcompany. Darren Huston On Trentmagazine. British Columbia Born CEO Darren Huston. Darren Huston | BCBusinessPriceline Group CEO Darren Huston. 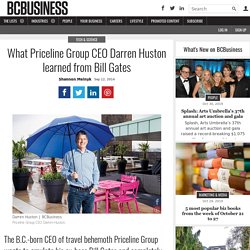 Darren Huston, the family farmhand turned CEO of $60-billion Priceline Group Inc., is arguably one of the most successful C-suite exports to come out of this province that you’ve never heard of. Born in Hope, B.C., and equipped with a Master of Economics from UBC and an MBA from Harvard, Huston quickly climbed the corporate ladder at Starbucks and Microsoft as a senior VP, including a three-year run as president and CEO of Microsoft Japan. In 2011, he landed at Amsterdam-based travel website Booking.com as CEO; in less than three years’ time, he tripled the size of that operation, and in January of this year Huston was named CEO of the parent company, Priceline. In addition to Booking.com and its eponymous website, Priceline’s other online properties include Kayak, Rentalcars, Agoda and Villas. Is it true that even you had never heard of Booking.com before you became a candidate for CEO? 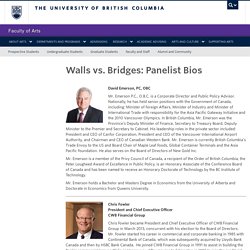 Emerson P.C., O.B.C. is a Corporate Director and Public Policy Advisor. Nationally, he has held senior positions with the Government of Canada, including: Minister of Foreign Affairs, Minister of Industry and Minister of International Trade with responsibility for the Asia Pacific Gateway Initiative and the 2010 Vancouver Olympics. In British Columbia, Mr. Emerson was the Province’s Deputy Minister of Finance, Secretary to Treasury Board, Deputy Minister to the Premier and Secretary to Cabinet. Mr. Darren Huston in BC. Darren Huston Video On CNBC.com.

Darren Huston. Huston has been at the Priceline Group since only 2014, but the CEO is making big moves and they’re already paying off: The company sold $50 billion worth of travel in 2014 and posted an 11% increase in profits in its most recent quarter. Huston shapes the company in two ways: First, his experience in digital at Microsoft and consumer services at Starbucks have made him a meticulous, hands-on operator.

The conversation with Phocuswright founder Philip Wolf, which included a discussion of Priceline Group’s operating structure, allowed Huston to provide his candid assessment of why he had no interest in acquiring HomeAway before its sale to Expedia last year. On both fronts, Priceline’s relationship with hotel chains and its decision not to attempt to acquire HomeAway, Huston was elaborating on remarks he’s made over the last few months. Join the 250,000 travel executives that already read our daily newsletter. Sign up below. Thank you for signing up Huston also questioned the viability of ridesharing giants as they begin to mature. Here are the highlights from Huston’s comments. Huston on hotel brand advertising that encourages consumers to book direct: “The challenge is that not every city is like St. Darren Huston. Darren Huston CEO remains bullish online travel. Darren Huston. Darren Huston. Darren Huston stepped up. Darren Huston is a calculative CEO. 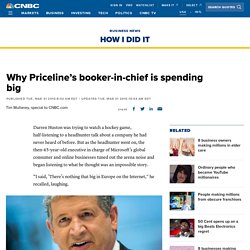 But as the headhunter went on, the then-45-year-old executive in charge of Microsoft’s global consumer and online businesses tuned out the arena noise and began listening to what he thought was an impossible story. “I said, ’There’s nothing that big in Europe on the Internet,‴⁣ he recalled, laughing. Darren Huston, president and CEO of Priceline.com Scott Eells | Bloomberg | Getty Images The 2011 call was from Booking.com, the Amsterdam-based unit of Priceline Group that dominates the European online travel market. Everyone knows Booking—and Priceline—now. A year after taking over from now-chairman Jeffery Boyd, Huston is building a Priceline in his own image. Read MoreBillionaire teams up with NASA to mine the moon. Darren Huston On Skift. CEO Darren Huston. Darren Huston.