I am a multi-lingual Eagle-Scout as well as a published poet. I am fluent in English and German. I speak Spanish, Cantonese, Japanese, Russian, Italian and Dutch fairly well but I am focusing almost all effort on German now! I have traveled throughout the U.K and Skandinavia and am hoping to travel further east. 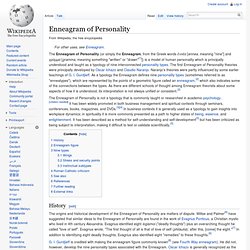 Wiltse and Palmer[6] have suggested that similar ideas to the Enneagram of Personality are found in the work of Evagrius Ponticus, a Christian mystic who lived in 4th century Alexandria. Evagrius identified eight logismoi ("deadly thoughts") plus an overarching thought he called "love of self". Rights. Rights are legal, social, or ethical principles of freedom or entitlement; that is, rights are the fundamental normative rules about what is allowed of people or owed to people, according to some legal system, social convention, or ethical theory.[1] Rights are of essential importance in such disciplines as law and ethics, especially theories of justice and deontology. 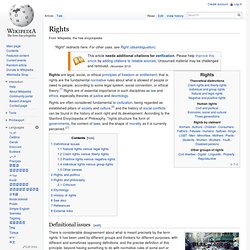 Rights are often considered fundamental to civilization, being regarded as established pillars of society and culture,[2] and the history of social conflicts can be found in the history of each right and its development. According to the Stanford Encyclopedia of Philosophy, "rights structure the form of governments, the content of laws, and the shape of morality as it is currently perceived. Active citizenship. Active citizenship refers to a philosophy espoused by organizations and educational institutions which advocates that members of companies or nation-states have certain roles and responsibilities to society and the environment , although those members may not have specific governing roles. 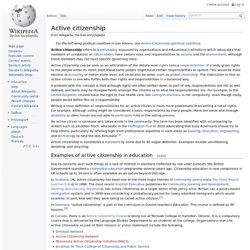 Active citizenship can be seen as an articulation of the debate over rights versus responsibilities . Seven virtues. History[edit] The first virtues were identified by the Greek philosophers Aristotle and Plato, who regarded temperance, wisdom, justice, and courage as the four most desirable character traits. 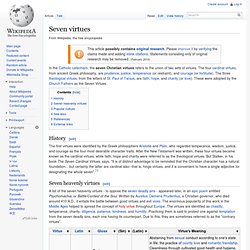 After the New Testament was written, these four virtues became known as the cardinal virtues, while faith, hope and charity were referred to as the theological virtues. But Stalker, in his book The Seven Cardinal Virtues, says, "It is of distinct advantage to be reminded that the Christian character has a natural foundation... but certainly the latter are cardinal also--that is, hinge virtues; and it is convenient to have a single adjective for designating the whole seven".[1] Seven heavenly virtues[edit]

Magna Carta. Magna Carta was the first document forced onto a King of England by a group of his subjects, the feudal barons, in an attempt to limit his powers by law and protect their rights. 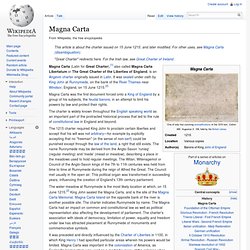 The charter is widely known throughout the English speaking world as an important part of the protracted historical process that led to the rule of constitutional law in England and beyond. United States Constitution. The Constitution was adopted on September 17, 1787, by the Constitutional Convention in Philadelphia, Pennsylvania, and ratified by conventions in eleven States. 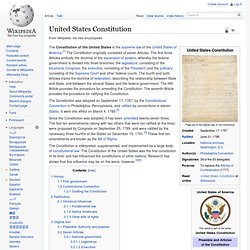 It went into effect on March 4, 1789.[2] Since the Constitution was adopted, it has been amended twenty-seven times. The first ten amendments (along with two others that were not ratified at the time) were proposed by Congress on September 25, 1789, and were ratified by the necessary three-fourths of the States on December 15, 1791.[3] These first ten amendments are known as the Bill of Rights. The Constitution is interpreted, supplemented, and implemented by a large body of constitutional law. The Constitution of the United States was the first constitution of its kind, and has influenced the constitutions of other nations. History. Amazon. 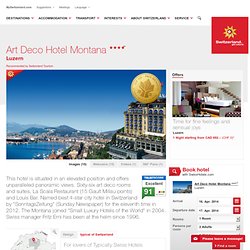 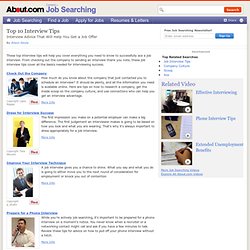 From checking out the company to sending an interview thank you note, these job interview tips cover all the basics needed for interviewing success. Check Out the Company Copyright Lajos Repasi How much do you know about the company that just contacted you to schedule an interview? It should be plenty, and all the information you need is available online. Dress for Interview Success. Helping Texans Work Better. Texas Workforce Commission - Workforce and Unemployment Resources. Product Catalogue. NeXtime. Sound. 'The Cube', one of the world's largest, privately owned electroacoustic measurement facilities, is an empty room measuring, 12 x 12 x 13 meters. 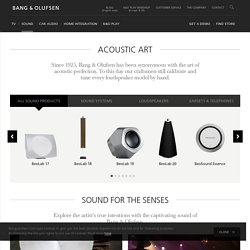 Starting from the technical drawings it is used in all stages of product development. Its enormous size makes it possible to measure acoustic response without reflections from walls, floor, or ceiling. 'The Cube' gives us the precision we need to measure a loudspeaker’s frequency, power and directivity responses. Accurate measurements alone aren't enough though. To truly sense whether music comes alive with the right tone and detail the human ear is still the final judge. Rate your foreign language fluency.

Rate your foreign language fluencyHome > Guide > Tips & Tricks > Rating your fluency We never stop learning a language : there are always new words to learn, old skills we forgot, and all our life we have to work on the foreign languages we learned. Is there a way to define what is "fluency" in a foreign language ? Where can we stop in the first stage of learning ? What's Your Learning Style? German Flashcards - Learn German Language Online. German radio stations streaming live on the internet. Stream types: requires Windows Media Player. 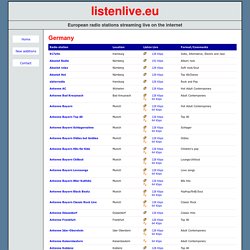 Whether in person at our shop and restaurant or online, enjoy what the tea community has to offer. Bildung. Bildung (German for "education" and "formation") refers to the German tradition of self-cultivation (as related to the German for: creation, image, shape), wherein philosophy and education are linked in a manner that refers to a process of both personal and cultural maturation.

This maturation is described as a harmonization of the individual’s mind and heart and in a unification of selfhood and identity within the broader society, as evidenced with the literary tradition of bildungsroman. Heimat. Heimat (pronounced [ˈhaɪmat]) is a German word with no English equivalent[1] that denotes the relationship of a human being towards a certain spatial social unit. Finding German-Language Pen Pals (2) Finding German-Language Pen PalsPart 2.