150901120805. New way to store solar energy could lead to more common solar cell usage. Researchers at Missouri University of Science and Technology have developed a relatively inexpensive and simple way to split water into hydrogen and oxygen through a new electrodeposition method. 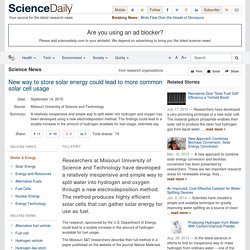 The method produces highly efficient solar cells that can gather solar energy for use as fuel. The research, sponsored by the U.S. Department of Energy, could lead to a sizable increase in the amount of hydrogen available for fuel usage. The Missouri S&T researchers describe their full method in a paper published on the website of the journal Nature Materials. "The work helps to solve the problem that solar energy is intermittent," says Dr. Switzer and his team use silicon wafers to absorb solar energy. Tiny carbon-capturing motors may help tackle rising carbon dioxide levels. Machines that are much smaller than the width of a human hair could one day help clean up carbon dioxide pollution in the oceans. 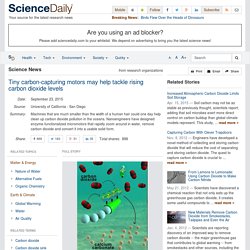 Nanoengineers at the University of California, San Diego have designed enzyme-functionalized micromotors that rapidly zoom around in water, remove carbon dioxide and convert it into a usable solid form. The proof of concept study represents a promising route to mitigate the buildup of carbon dioxide, a major greenhouse gas in the environment, said researchers.

The team, led by distinguished nanoengineering professor and chair Joseph Wang, published the work this month in the journal Angewandte Chemie. Small-scale nuclear fusion may be a new energy source. Fusion energy may soon be used in small-scale power stations. 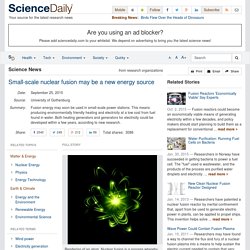 This means producing environmentally friendly heating and electricity at a low cost from fuel found in water. New Species Of Human Discovered In South Africa. Scientists Develop Ice Cream That Doesn't Melt In The Heat. Frantically devouring your ice cream in hot weather as it starts to drip on your hand could soon be a thing of the past. 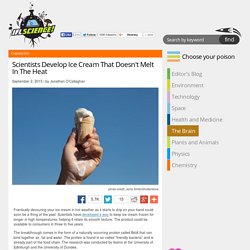 Scientists have developed a way to keep ice cream frozen for longer in high temperatures, helping it retain its smooth texture. A Guide to Self-Care for People with Anxiety. [The image features a metal case, presumably a first aid kit, with the words “SELF CARE” on top.] 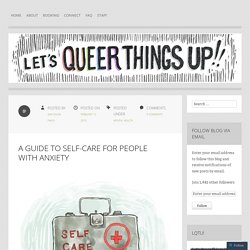 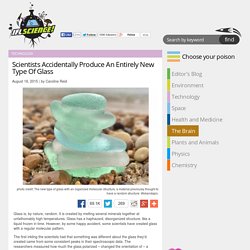 It is created by melting several minerals together at unfathomably high temperatures. Five Disturbing Things You Didn't Know About Forensic "Science" Last week, The Washington Post revealed that in 268 trials dating back to 1972, 26 out of 28 examiners within the FBI Laboratory’s microscopic hair comparison unit “overstated forensic matches in a way that favored prosecutors in more than 95 percent” of the cases. 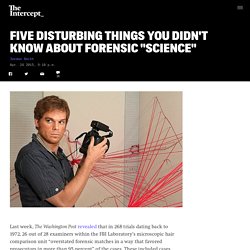 These included cases where 14 people have since been either executed or died in prison. The hair analysis review — the largest-ever post-conviction review of questionable forensic evidence by the FBI — has been ongoing since 2012. Exclusive: New Study Shows Accuracy Of Fingerprint Analysis. Follow CBSMIAMI.COM: Facebook | Twitter MIAMI (CBSMiami) — You’ve likely seen crime scene investigators working their magic, dusting charcoal carbon powder and lifting fingerprints to use in criminal investigations. 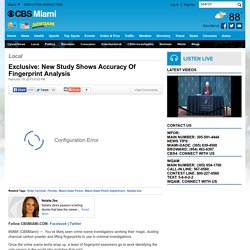 Once the crime scene techs wrap up, a team of fingerprint examiners go to work identifying the only person in the world who matches that print. In the Miami-Dade Police crime lab, examiner Brian Cerchiai eyeballs fingerprint cards, but he and his team also match prints with the help of computer programs, that magnify the print helping them look at the details of the ridges. 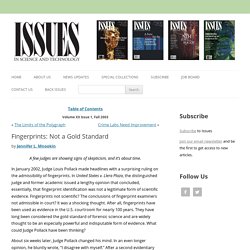 In January 2002, Judge Louis Pollack made headlines with a surprising ruling on the admissibility of fingerprints. In United States v. Reliability-of-Fingerprint-Evidence. As a general proposition, fingerprint experts believe that fingerprint patterns never change and are unique to each individual. 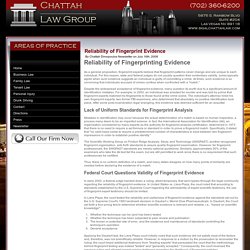 For this reason, state and federal judges do not usually question their evidentiary validity. Juries typically agree when such evidence suggests an individual is guilty of committing a crime. At times, such evidence is so convincing that individuals accused of crimes confess when confronted with a "match. " Accuracy and reliability of forensic latent fingerprint decisions. Piezoelectricity. Crystals which acquire a charge when compressed, twisted or distorted are said to be piezoelectric. Piezoelectricity. Staring Into Someone's Eyes For 10 Minutes Can Alter Your Consciousness. Forget LSD: eyes are the new high. Of course, we’re not talking about consuming them, but rather staring intensely into a pair for a prolonged period of time. Apparently, this can make people enter into an altered state of consciousness. Theconversation. For most of the common cancers, a major cause has been identified: smoking causes 90% of lung cancer worldwide, hepatitis viruses cause most liver cancer, H pylori bacteria causes stomach cancer, Human papillomavirus causes almost all cases of cervical cancer, colon cancer is largely explained by physical activity, diet and family history.

But for breast cancer, there is no smoking gun. It is almost unique among the common cancers of the world in that there is not a known major cause; there is no consensus among experts that proof of a major cause has been identified. Yet, breast cancer is the most common form of cancer in women worldwide. The risk is not equally distributed around the globe, though. Women in North America and Northern Europe have long had five times the risk of women in Africa and Asia, though recently risk has been increasing fast in Africa and Asia for unknown reasons. One step closer to an artificial nerve cell. Updated on 2015-06-24. Scientists Create Artificial Neuron that Functions Like the Real Thing. Recording The Entire Nervous System In Real Time Will Unlock Secrets Of The Brain. There are around 100 billion neurons in the human brain, each connected to hundreds of neighbours. Analysing the link between neural activity in the brain, and the behaviour that causes it, could shed light on both areas.

Shift Work Causes Breast Cancer In Mice, According To A New Study – So What Does This Mean For Humans? A new study on mice claims that shift work increases the risk of breast cancer. Study Finds That The More Beautiful Your Home Is, The Less Likely You Are To Be Religious. Help for Adult ADD / ADHD: Tips for Managing Symptoms and Getting Focused.