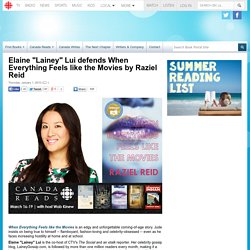 Jude insists on being true to himself -- flamboyant, fashion-loving and celebrity-obsessed -- even as he faces increasing hostility at home and at school. Elaine "Lainey" Lui is the co-host of CTV's The Social and an etalk reporter. Her celebrity gossip blog, LaineyGossip.com, is followed by more than one million readers every month, making it a leading international celebrity gossip source.

Her first book, Listen to the Squawking Chicken, debuted at #1 on the Globe and Mail bestseller list. Raziel Reid is a former go-go boy turned society columnist and pop culture blogger for DailyXtra.com. Lainey on why When Everything Feels like the Movies should win Canada Reads: "Stories about young characters aren't just relatable to young readers. Watch the trailer: Watch Raziel Reid on The National: Flamingo Rampant - Books and more for gender-independent kids and families! LGTBQ Canadian Children's Literature on Pinterest. 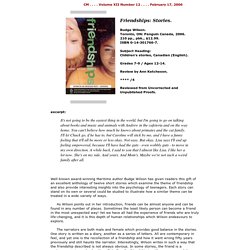 Volume XII Number 12 . . . . February 17, 2006. What Elisabeth is reading. In response to a speech by David Levithan, Australian YA author Justine Larbalestier is compiling a list of Australian GLBT YA books. 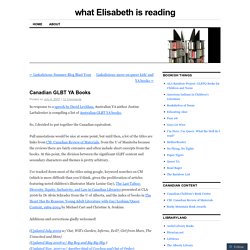 So, I decided to put together the Canadian equivalent. Full annotations would be nice at some point, but until then, a lot of the titles are links from CM: Canadian Review of Materials, from the U of Manitoba because the reviews there are fairly extensive and often include short excerpts from the books. At this point, the division between the significant GLBT content and secondary characters and themes is pretty arbitrary. Middle School Pride : LGBTQ+ Tweens in Literature for Youth. Image from Middle school (usually 5th through 8th grade) is an incredible time. 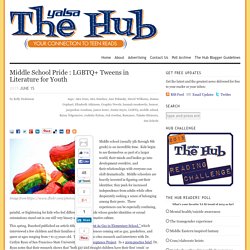 Kids begin to see themselves as part of a larger world, their minds and bodies go into development overdrive, and their relationships with everyone can shift dramatically. Middle schoolers are heavily invested in figuring out their identities; they push for increased independence from adults while often desperately seeking a sense of belonging among their peers. These experiences can be especially confusing, painful, or frightening for kids who feel different–such as kids whose gender identities or sexual orientations stand out in our still very binary and heteronormative culture. What Elisabeth is reading. Gay-Themed Picture Books for Children. Gay-Themed Picture Books for Children. Picture Books, Flamingos and Tango. In New Anthology, LGBT Authors Speak to Their Younger Selves. Kids and Young Adult Books - Queer Library Alliance.

Awards Recent award winner: Aristotle and Dante Discover the Secrets of the Universe The Rainbow List Started by the American Library Association (ALA) in 2008, The Rainbow List "presents an annual bibliography of quality books with significant and authentic GLBTQ content, which are recommended for people from birth through eighteen years of age. 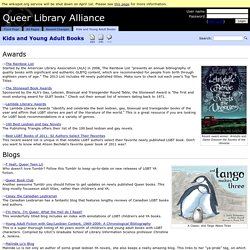 " The 2013 List includes 49 newly published titles. Make sure to check out each year's Top Ten Titles. The Best LGBT Books of 2011: 92 Authors Select Their Favorites - Band of Thebes. This was the year Borders went out of business, shuttering 511 stores. 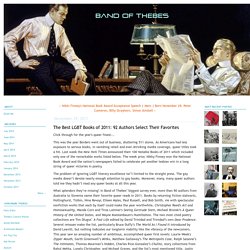 As Americans had less exposure to serious books, in vanishing retail and ever-shrinking media coverage, queer titles took a hit. Last week the New York Times announced their 100 Notable Books of 2011 which included only one of the remarkable works listed below. The week prior, Nikky Finney won the National Book Award and the nation’s newspapers failed to celebrate yet another lesbian win in a long string of queer victories in poetry. The problem of ignoring LGBT literary excellence isn’t limited to the straight press. The gay media doesn’t devote nearly enough attention to gay books. Books I’ve Read; Books I’ve Yet to Read. Behold, my master list of books to read and review for this blog! 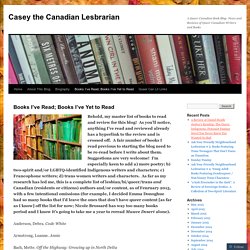 As you’ll notice, anything I’ve read and reviewed already has a hyperlink to the review and is crossed off. A fair number of books I read previous to starting the blog need to be re-read before I write about them. Books by Genre. What Elisabeth is reading. LGBTQ & You: How to Support Your Students. Photograph by Kai Teoh/Ink Café Photography A former part-time school library assistant, Amanda MacGregor (above) considers the lesbian, gay, bisexual, transgender, and questioning (LGBTQ) teens she worked with for more than three years to be “my kids,” she says. 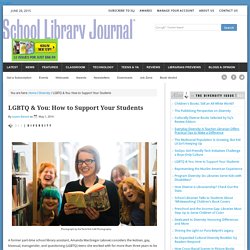 Wanting to make sure materials were available for them—without forcing students to request them directly—MacGregor created displays of LGBTQ books, listed phone numbers for groups like the Trevor Project, a crisis intervention program for LGBTQ young people, and mixed LGBTQ titles in with ones thematically ranging from vampire tales to mysteries when creating book lists. However, she thinks that her mere presence in a room without doors or an office, where students who needed a safe space could walk in and just be themselves, may have been her greatest value.